Donald Trump has made a return to social media to say allegations against him cannot be proven.

The former president used his account on Gab, an alternative platform to Twitter often used by his right-wing followers, to release a letter from his lawyers.

After being banned from Twitter and Facebook, he has been relatively quiet on social media but has used Gab to continue to claim the election was fraudulent. 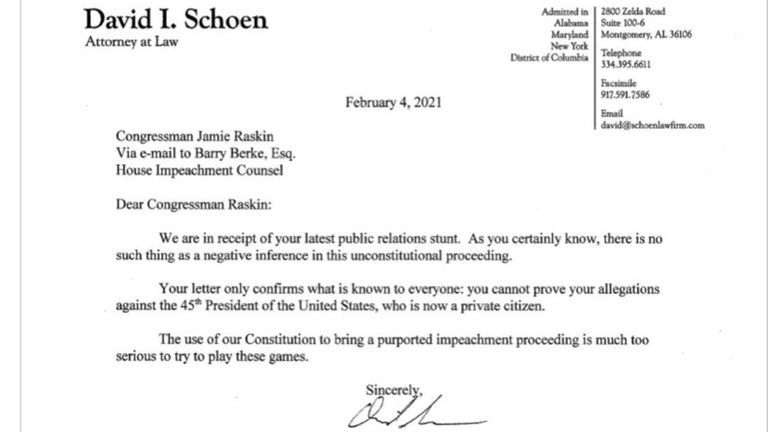 In his first post since 8 January, Mr Trump posted a reply to Congressman Jamie Raskin’s invite for the former president to testify under oath at his impeachment trial for allegedly inciting insurrection which resulted in the Capitol riots.

His adviser, Jason Miller, first shared Mr Trump’s refusal to appear earlier this week but the former president’s post to Gab was the first time the full letter had been seen publicly.

They added: “Your letter only confirms what is known to everyone: that you cannot prove your allegations against the 45th president of the United States, who is now a private citizen.

“The use of our constitution to bring a purported impeachment proceeding is much too serious to try to play these games.”

He accused Mr Trump of attempting “to put critical facts at issue notwithstanding the clear and overwhelming evidence of your constitutional offence”.

The Democrat requested Mr Trump’s testimony, “including cross-examination”, as early as 8 February and no later than 11 February.

He also said presidents Gerald Ford and Bill Clinton provided testimony while in office, and as there is no concern of distraction from official duties “we therefore anticipate your availability to testify”.

Mr Raskin said if Mr Trump declined to testify Congress has the right to “establish at trial that your refusal to testify supports a strong adverse inference regarding your actions (and inaction) on January 6, 2021” – the day of the Capitol riots.