Justice Ginsburg died aged 87 due to complications from pancreatic cancer, almost three decades since she was appointed to the Supreme Court by the then-president Bill Clinton in 1993.

She became a liberal icon after providing key votes in landmark rulings securing equal rights for women, expanding gay rights and safeguarding abortion rights, and she received tributes and recognition from across the political spectrum at home and abroad following her death. 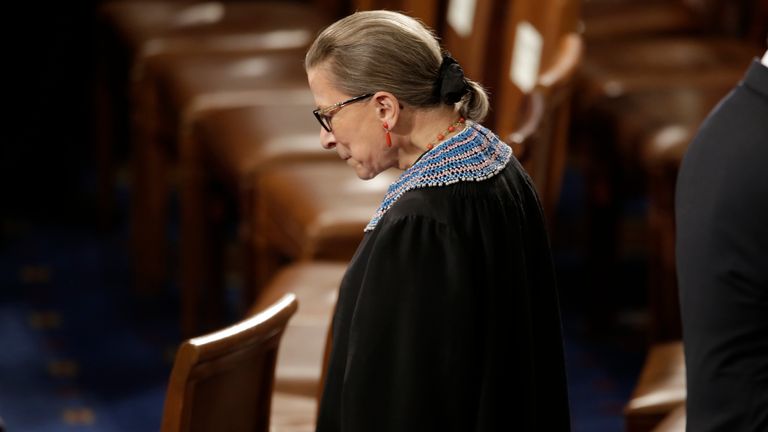 In a statement dictated to her daughter days before her death, Justice Ginsburg said her “most fervent wish” was not to be replaced until after November’s presidential election, according to non-profit media organisation NPR.

However, the perceived political leanings of Supreme Court justices, especially on controversial issues such as abortion rights, has made their appointments a matter of significant political debate.

The procedure for appointing a Supreme Court justice allows the president to nominate a candidate and then requires the Senate to confirm them.

But while the Senate confirmation of a justice had historically been bipartisan due to a requirement of a supermajority vote of 60%, this was replaced in 2017 by a requirement for a simple majority vote, as the Republicans sought to confirm Mr Trump’s nomination of Neil Gorsuch.

Senior Democrats have called for the new appointment to be delayed until after the election, but Mitch McConnell – the Senate majority leader – has vowed to quickly call a vote to confirm Mr Trump‘s nominee.

In a tweet on Saturday, Mr Trump tagged the Republican Party’s official account to call for his new nomination to be appointed “without delay”, describing it as an obligation to the people who voted for them.

Justice Ginsburg had resisted calls to retire during Barack Obama‘s presidency, when the Senate was majority Democrat and a nominee with similar views on women and minority rights could have been confirmed.

Mr Trump is now expected to nominate a replacement who could appeal to his Republican base with their views on access to abortions, environmental regulation, and on the limits on the power of the office of president.

If successful, the Supreme Court could be dominated by conservative justices for decades to come, and potentially overturn Roe v Wade – the landmark Supreme Court decision in 1973 which protects a woman’s right to access an abortion in the US.

Presidential hopeful Joe Biden, who described Justice Ginsburg as an “American hero”, pointed to the Republican Senate’s decision in 2016 not to appoint a successor to Justice Antonin Scalia until that year’s election.

“Just so there is no doubt, let me be clear: the voters should pick a president, and that president should select a successor to Justice Ginsburg,” he said.