Recent multiple-vehicle pileups amid this year’s brutal weather have underscored the dangers of driving in winter conditions. In 28 hours last week, from early Thursday to Friday morning, the Iowa State Patrol received calls for help at 195 crashes. In Texas, six people were killed and dozens were hospitalized on Thursday in a pileup that involved more than 100 vehicles on Interstate 35.

In both states, the authorities had issued warnings about hazardous driving conditions. Drivers in Texas were confronted with slick roads and patches of ice. An Arctic front that sped across Iowa enveloped vehicles in a wintry mess of freezing rain, snow and ice.

While these are not comprehensive, here are a few tips on how to drive safely in winter weather.

State agencies routinely publish forecasts of potentially hazardous weather that may affect travel. They can also advise residents, as they did in Texas and Iowa, to avoid driving unless necessary. Transportation departments, the National Weather Service and 511-type social media accounts provide live updates.

Winter is still in full force. Multiple states are bracing for severely cold weather this weekend, especially in the Upper Midwest, with the most extreme wind chills approaching minus 50 degrees in Minnesota, MPR News reported.

In Iowa, a 40-vehicle pileup that stretched for about two miles on Interstate 80 last week formed directly after a crest in a hill, according to Steve Gent, the Iowa Department of Transportation bureau director for traffic and safety. Even in the best conditions, hills can be challenging for drivers who are not completely alert, because whatever is happening on the other side appears without warning, he said.

Factor in a roadway slick with ice or snow, and drivers in passenger vehicles should cut their speed by at least five miles per hour and put more space between themselves and the vehicle in front of them, Mr. Gent said. Those factors affect a driver’s “perception-reaction” time, he said.

“All of a sudden you pop over a hill and everybody in front of you has their brake lights on,” he said. Total time: 1.5 seconds for perception, and one second for reaction, at best.

“We use 2.5 seconds to recognize that something is going on ahead of you, to decide to swerve or brake and then make that maneuver,” Mr. Gent said. “That will cover 90 percent of the population.”

If a driver sees a string of cars and trucks ahead crashing into each other like dominoes, Mr. Gent has two recommendations.

First, tap your brakes. Then, maneuver to avoid.

“Take the ditch,” Mr. Gent said. “The worst thing you want to do is slow down and get in the pileup. We design those ditches so you can drive in, and you are not going to flip over.”

“Anytime you look at a pileup, the bad crashes are the ones on the roadway,” he said.

Be Picky About Roadways, When Possible

In wintry conditions, drivers should avoid roadways that do not give them an out, said Will Miller, an analyst with Crash Analysis Consulting in Southlake, Texas. He said that meant avoiding highways that have barrier walls on both sides, and avoiding elevated structures such as bridges and overpasses when possible, as they freeze more quickly and stay frozen longer than those on the ground.

“These rules are true no matter a driver’s geographical location,” he said. “In Texas, specifically, we lack the infrastructure most Northern states utilize to properly treat the roadways and clear specific weather-related hazards.”

Some features of passenger vehicles can be tricky in winter weather. The National Highway Traffic Safety Administration advises drivers to double-check that they understand how features such as anti-lock brakes and electronic stability control will perform in wintry conditions. Drivers should also slow down, it says.

Some experts generally advise against using cruise control when ice or snow patches could crop up.

“Up here, we are driving on snowy roads a lot, especially on country and back roads,” said Dave Werner, executive secretary of the Traffic Safety Board of Franklin County, N.Y. “You have got a lot of slipperiness, and it changes every hundred feet you go.”

He also said that the places in a roadway where vehicles stop and start, such as stop signs or traffic signals, were usually more slippery than the rest of the road.

Andrew Gross, a spokesman for AAA, said he had one overriding observation when watching videos of the recent Texas crash. “The only thing that stood out to me is speed,” he said. “Everyone was going too fast for the conditions.”

“I see it repeated in the Texas case that it was a ‘thin coat of ice,’” he said, referring to reports on the crash. “But remember, the depth of the ice doesn’t matter. It’s the slippery surface contact that matters.”

Slamming on brakes in ice, snow or rain should be avoided because it can lead to hydroplaning. “If you are going slow enough, you should be able to navigate around it,” Mr. Gross said.

If the worst happens, he said, keep your seatbelt and flashers on, and stay in the car.

“Remember it’s a highway,” he said. “On a lot of these highways, there is no place to go.” 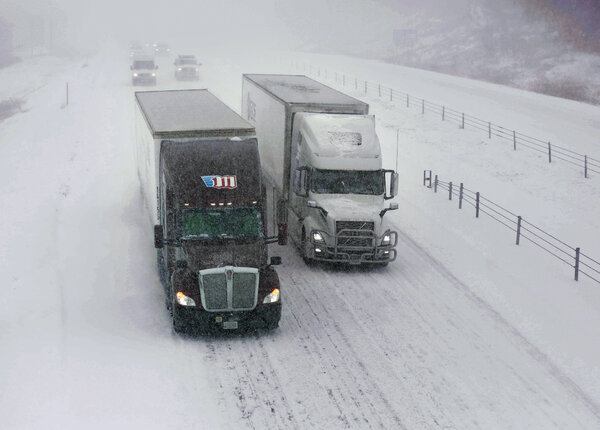