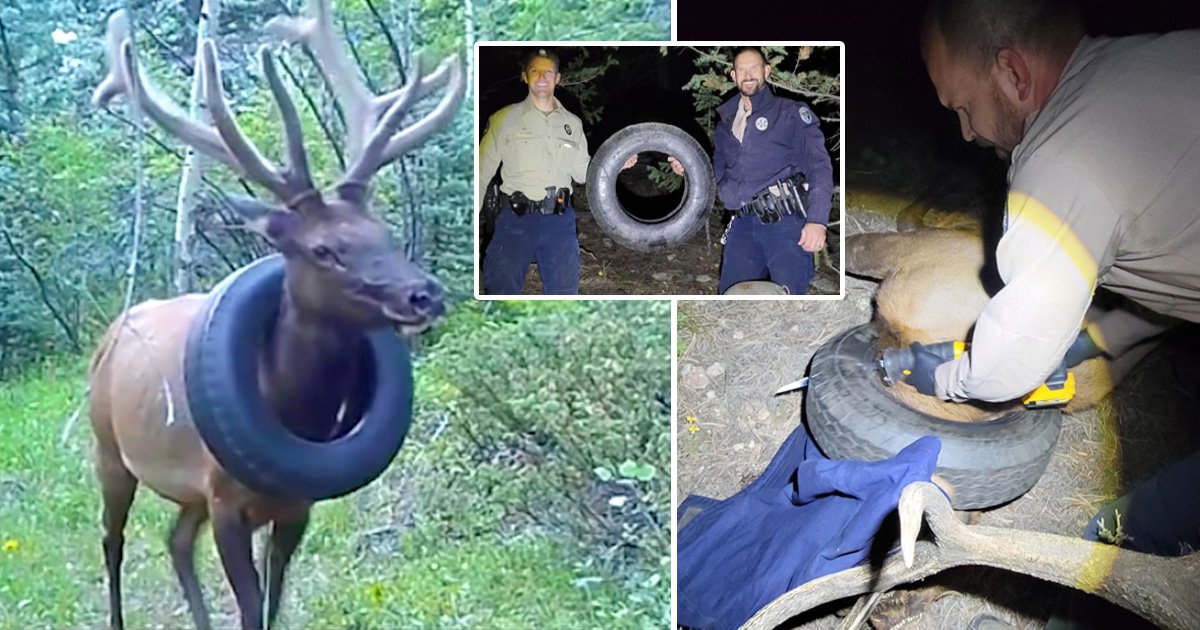 An elusive elk that wandered the hills of Colorado with a car tyre around its neck for two years has finally been freed.

The four-and-a-half-year-old, 600lb (270kg) bull elk was spotted near Pine Junction, south-west of Denver, on Saturday evening, according to Colorado Parks and Wildlife.

It was the fourth attempt wildlife officials had made since May to help the animal.

Wardens tranquillised the elk so they could remove the tyre. But they had to cut off the elk’s five-point antlers in the process because they could not slice through the steel bead inside the tyre.

Scott Murdoch, a Colorado Parks and Wildlife officer said the tyre was ‘tight’ to remove but that he and his colleagues were surprised by the condition of the elk’s neck once it was taken off.

He said: ‘We would have preferred to cut the tyre and leave the antlers for his rutting activity, but the situation was dynamic and we had to just get the tyre off in any way possible.’

He estimated that after removing the elk’s antlers and the tyre, which was full of debris, the animal was about 16kg lighter.

Scott said: ‘The hair was rubbed off a little bit, there was one small open wound maybe the size of a nickel or quarter, but other than that it looked really good.

‘I was actually quite shocked to see how good it looked.’

Wildlife officers first spotted the elk had a tyre around its neck in July 2019 while they were doing a population survey of Rocky Mountain bighorn sheep and mountain goats in the Mount Evans Wilderness.

But it then eluded them for more than two years. Officers would get occasional reports of the elk in the spring months but sightings were few and far between.

Wildlife officers suspect the elk got the tyre around its antlers either when it was very young and didn’t have any, or during the winter when it shed its antlers.

It is not the first creature to get caught up in a man-made item.