The race for New York City mayor took an extraordinary turn on Wednesday as the leading candidate, Eric Adams, gave reporters a tour of a Brooklyn apartment he owns, while rival campaigns questioned his residency and fitness for office.

A day after a Politico New York story raised questions and highlighted apparent discrepancies regarding where Mr. Adams, the Brooklyn borough president, resides when he is not sleeping in Brooklyn Borough Hall — he owns properties in Brooklyn and Fort Lee, N.J., the report noted — Mr. Adams held an emotional news conference outside a residence in the Bedford-Stuyvesant neighborhood of Brooklyn, joined by his son, Jordan.

“How foolish would someone have to be to run to be the mayor of the city of New York and live in another municipality,” Mr. Adams said.

He led a tour of a wood- and brick-trimmed apartment, showing off what he referred to as a “small, modest kitchen” and “small, modest bathroom” while reporters inspected the refrigerator and a sneaker collection.

The highly unusual event unfolded as the race entered a tumultuous, increasingly rancorous final stretch, less than two weeks before the June 22 Democratic primary that is almost certain to determine the city’s next mayor. Mr. Adams, a former police captain, has topped a number of recent polls as he presses a message focused on public safety, but the race appears fluid even in the final days.

But the poll was conducted in the second half of May, and there has been little data since to capture how a number of major recent developments are registering with voters, including Representative Alexandria Ocasio-Cortez’s Saturday endorsement of Maya D. Wiley, a former counsel to Mayor Bill de Blasio. Jumaane D. Williams, the New York City public advocate, endorsed Ms. Wiley on Wednesday.

Questions about how Mr. Adams spends his time when not on the campaign trail injected a new element of uncertainty into the race and offered fresh fodder for his opponents. Early voting begins on Saturday.

“Eric Adams has a problematic record of not being fully honest or transparent with the voters of New York,” Ms. Garcia said in a statement on Wednesday. “As we recover from Covid, the last thing we need is a career politician with a hidden agenda at City Hall. Our city cannot recover if the mayor lacks integrity.”

And in a rare display of cross-campaign comity, Mr. Yang’s co-campaign managers released a list of questions for Mr. Adams on Wednesday that, they noted, was intended to add to questions raised by Ms. Wiley’s team the day before.

“Why would anyone vote for a candidate who can’t even be honest about where he lives?” asked Sasha Ahuja and Chris Coffey, Mr. Yang’s campaign managers, as they detailed a list of ethics concerns. “How are the traffic problems in Fort Lee? What are you hiding?” 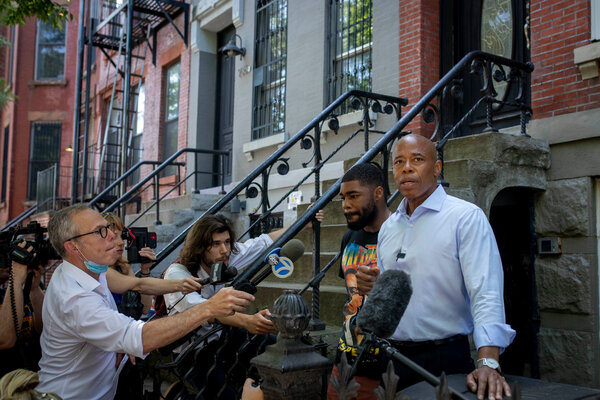 A crowd of journalists gathered outside Mr. Adams’s Bedford-Stuyvesant townhouse, where a table was set up with coffee and vegan pastries for reporters. (Mr. Adams is a vocal vegan.)