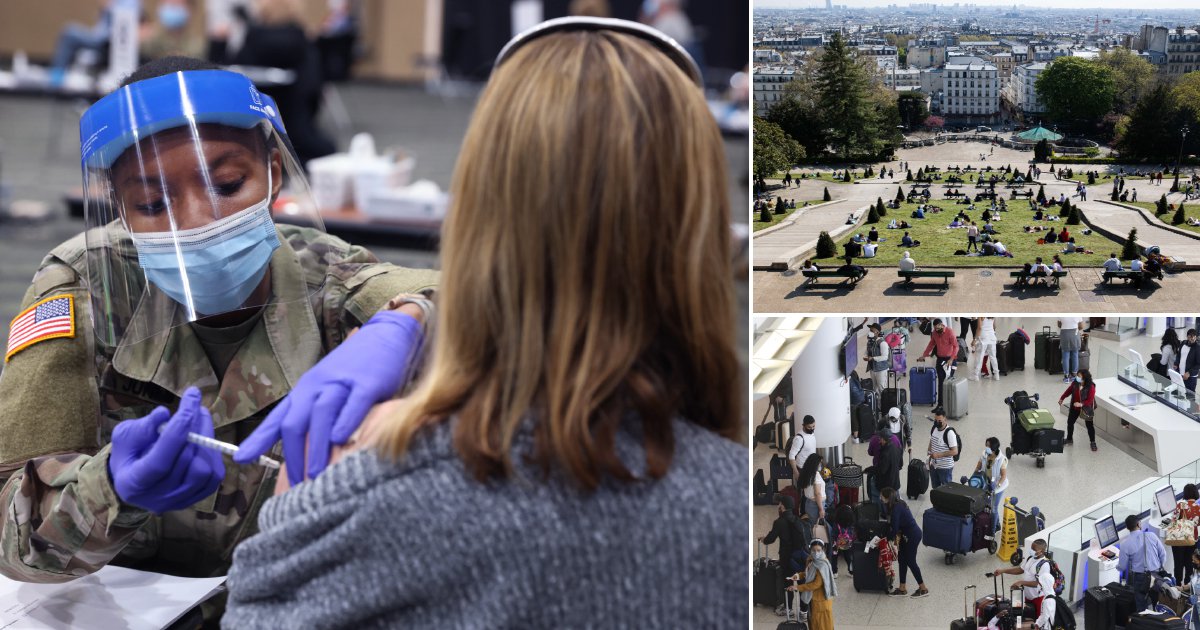 Fully-vaccinated Americans with proof of immunity will be able to visit Europe this summer.

That’s according to the head of the European Commission, Ursula Von Der Leyen, who has said trans-Atlantic travel will get back up and running in the coming weeks. Speaking to the New York Times, she has revealed how the EU and the US are in advanced talks for how to make vaccine certificates acceptable for travel, but warned the plans will only be possible if their respective vaccine rollouts continue as planned.

Mrs Von Der Leyen said she expects a ‘free moment’ agreement to be in place between the US and Europe in time for summer holidays, more than a year after all non-essential travel ground to a halt due to the spread of coronavirus.

She also said the deal will be possible because the US is using vaccines that are also most widely in use in Europe.

‘The Americans, as far as I can see, use European Medicines Agency-approved vaccines. This will enable free movement and the travel to the European Union’, said Mrs Von Der Leyen.

She added: ‘Because one thing is clear, all 27 member states will accept, unconditionally, all those who are vaccinated with vaccines that are approved by EMA.’

As of yet there is no sign of a similar agreement between the UK and the US or the UK and Europe, despite Britain’s successful vaccine rollout. So far the UK has given one vaccine injection to more than half of population, 33.6million, and have fully-vaccinated another 12.5million people.

That means well over half of the UK population, 68%, has received at least one jab, which is almost exactly the same amount, in relative terms based on population, as the US. America has fully-vaccinated 95million people and have given one jab to another 140million.

Mrs Von Der Leyen did not say exactly when American tourists will be able to travel to the EU, but her comments represent the biggest statement of intent about international travel from the EU since the pandemic began.

She noted that the United States was ‘on track’ with its vaccine rollout and is making ‘huge progress’ with its bid to reach herd immunity, or the vaccination of 70 percent of adults, by mid-June.

She did stress, however, how the return of trans-Atlantic travel will depend on the continued suppression of the virus.

Technical discussions have been going on for several weeks between European Union and officials in the US on how to make vaccine certificates work reliably, so that tourists can travel freely.

These discussions are continuing, according to officials in Brussels said, and it is possible that a low-tech solution would be used in the near future to enable free travel to vaccinated air passengers.

The hope of officials is that government-issued vaccine certificates will play a part in travel between the European Union and America to provide proof of immunity.

While individual member states will be able to make the own rules for who can visit their countries, Mrs Von Der Leyen’s comments suggest the European Commission will recommend a blanket change in travel policy in the near future.

Until now, nonessential travel to the EU from the US has been officially banned with the exception of visitors from countries where cases rates are extremely low, like Australia, New Zealand and South Korea.

The UK meanwhile is expected to announce its shortlist of ‘green’ countries that the government deems safe to travel to, on May 17. It’s not yet clear, however, which countries will make that list and if the countries on the list will be willing to accept British visitors.