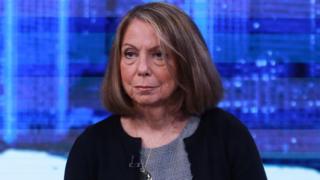 Former New York Times executive editor Jill Abramson has responded to claims that parts of her book are plagiarised.

The allegation about Merchants of Truth, which was released on Tuesday, was made by Vice News journalist Michael C Moynihan.

Ms Abramson says she takes the accusations “seriously” and will now “review the passages in question”.

Merchants of Truth looks at how journalism has changed over the last decade.

In a Twitter thread, Mr Moynihan copied out excerpts from the book and compared them to passages published elsewhere.

He said he first started looking into the book after seeing “an egregious error” about a Vice News colleague, Arielle Duhaime-Ross, who was wrongly identified as transgender in an initial review copy.

After Ms Abramson corrected the mistake for the final publication, Mr Moynihan said he wanted to fact-check all three chapters about Vice because he felt they were “clotted with mistakes”.

“While trying to corroborate certain claims, I noticed that it also contained… plagiarised passages,” he wrote.

He then tweeted out a series of passages from the final copy of the book, alongside other articles and essays which he believed used very similar language.

Others in the media were quick to respond, with some saying the book was “a masterclass in how not to do journalism”.

Really disappointed to read this thread about plagiarism within Jill Abramson’s new book. The evidence compiled by Michael is overwhelming, and he only fact-checked three chapters. There is absolutely no excuse for this. https://t.co/7SC4wugyb8

Speaking soon after the accusations, Ms Abramson told Fox News that she “certainly didn’t plagiarise in my book”.

A few hours later she issued a new response on Twitter, promising to look into Mr Moynihan’s claims.

“The attacks on my book from some in @vicenews reflect their unhappiness with what I consider a balanced portrayal,” she wrote. “I endeavoured to accurately and properly give attribution to the hundreds of sources that were part of my research. I take seriously the issues raised and will review the passages in question.”