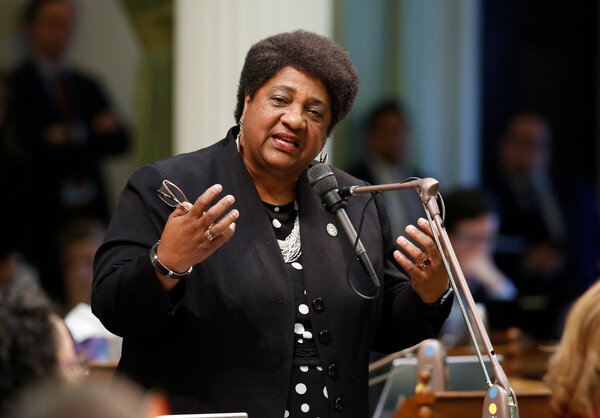 This week, California set out on a fraught, complicated mission that no other state has attempted: come up with proposals to provide reparations to Black Californians for slavery and centuries of systemic discrimination and inequality.

A group of nine politicians, scholars and lawyers appointed to a task force will study the issue as part of a two-year process. Their first meeting was Tuesday.

As a state lawmaker, Shirley Weber, who is now California’s secretary of state, spearheaded the effort to begin the process. I spoke with Weber on Wednesday about the task force, as well as about voting rights. Here is our conversation, edited for length and clarity.

You spoke movingly yesterday to introduce the task force. One of the things you said was that you had been asked: “Why should California take this on when it wasn’t part of the Confederacy?” Can you expand on that a bit?

When I was in the Assembly, Gov. Jerry Brown would always talk about the first governor of California — the statements he made, his actions. And that sparked me to carefully look at the history of California.

California is a place my parents escaped to from Hope, Ark. It was a better place to go, but there’s no panacea. There’s no perfect California.

Some of it may not have been written down, but there were things: Black people couldn’t get bank loans. There was redlining. You start to put it all in context.

And we’ve waited for Congress to take up this reparations bill for over 35 years. They just can’t move.

So I said, “Why am I constantly supporting this thing? Let’s do it ourselves.”

We’re such a huge state, with wealth, and we can be an example for others. We got the bill to form the task force passed out of both houses in four or five months, not 40 years. I think California can lead.

This is such a huge, momentous assignment. Is there any other program or initiative that you hope the task force will look at closely?

People have come up with different ideas. In Evanston, Ill., they’re grappling with homeownership in a small community, but that’s not at the scale of California.

Most of those on the panel have done research on reparations, and they have a vision that’s greater than what we’ve ever done. We don’t want this to be another affirmative action.

But they don’t want to do something that’s too quick and turns out to be a boondoggle. Steven Bradford, a lawmaker on the task force, is working to return Bruce’s Beach in Manhattan Beach to the family that owned it before it was taken.

But there are property taxes and other considerations — you can’t be shortsighted and give them back something to manage without the benefit of 40, 50, 60 years of income from the property. I’m very impressed by their thoughts on how to make sure there isn’t a backlash into poverty.

You mentioned you hope reparations don’t take the form of something like affirmative action.

The challenge with affirmative action is it applies to everybody. It’s not reparation — it doesn’t talk about somebody having done wrong. What happens with that is there is no discussion of, “What is the damage and who caused the damage?”

It wasn’t, they came here and you can’t speak English or you have other barriers. For African Americans, the system was built to keep you out of schools, to keep you from reading and learning.

I’m not against affirmative action. But there’s a tendency to associate with it immediate problems and say, let’s remedy this, without saying, “We denied folks the opportunity for this.” Or, “Look what happened when we stole the land from these folks. Look how we benefited from it because we took their land, look how we benefited from the rules and regulations that forbade them from doing something.”

Paying what you owe, that’s a totally different thing.

I want to ask you now about your new(ish) job as secretary of state. You have spoken about what it means to you to have this role, especially given the fact that your parents, your grandparents were kept from voting. What do you make of the efforts in other states to restrict voting?

This is a unique time in the national history.

We’re in a fragile situation. Everything we thought was important — the balance of power — is fragile. Who would have ever thought our Congress would not want to investigate an attack on them? Who would have thought we would not say this is unacceptable, this is un-American?

There needs to be a voice for secretaries of state across the nation. California can do that as so many of our colleagues in Arizona and across the nation are under attack. I’m very unafraid to raise my voice to assist other states when we can, and we have to keep reminding people what happens in a nation when they’re denied the right to vote.

In California, I want to keep pushing the envelope. People said we should be dancing in the street because we got 70 percent of eligible voters, with no evidence of fraud. We’ve got to get 100 percent.

Deb Haaland is the first Native American to lead a cabinet agency, specifically the Interior Department, which was once responsible for eradicating the homes, culture and often the lives of Indigenous people.

Rural counties in Northern California and the greater Sacramento area have some of the lowest vaccination rates in the state, causing virus cases in some places to rise, The Los Angeles Times reports.

The Washington Post explored vaccine hesitancy and the conspiracy theories that circulate among farmworkers in California’s wine country.

Huntington Beach’s mayor pro tem, Tito Ortiz, resigned after a rocky six-month term in which he attracted criticism for refusing to wear a mask at city events, The Orange County Register reports.

CalMatters broke down the four things you need to know about the $267.1 billion budget deal announced Tuesday by the State Assembly and State Senate.

A Bay Area man died over the weekend after falling 500 feet off a mountain ridge in Sequoia National Park, SFGate reports.

Naomi Osaka, who said she faced “long bouts of depression,” joined other noteworthy athletes in pushing a once-taboo subject into the open.

The State Senate passed a bill to decriminalize psychedelic drugs, and now it will head to the State Assembly, Fox 40 reports.

The New Yorker explored the work of Rich Paul, the agent of LeBron James and other NBA stars, whose tough negotiating style is giving his clients new power.

Thinking of becoming a “digital nomad” this summer? Here’s what you need to know.