The corkscrew political career of the mayor of Fall River, Mass., took another turn on Friday as federal prosecutors announced he had been charged with bribery and extortion in what they said was a scheme to shake down marijuana vendors in return for his support.

News of the indictment, announced by the United States Attorney’s Office for the District of Massachusetts, was the latest political upheaval to rock this city, which is about 50 miles south of Boston.

In less than a year, the mayor, Jasiel F. Correia II, has already faced separate federal fraud and tax evasion charges, a recall election in which voters chose to oust him from office, but then in a peculiar twist ended up keeping his job because he was the top vote-getter for mayor in the same election.

Mr. Correia, who at 24 became the city’s youngest mayor when he took office in January 2016, agreed to issue so-called nonopposition letters, which are required to run a medical or recreational marijuana business in Massachusetts, in return for cash bribes and other payments, federal prosecutors said in a news release.

The bribes ranged from $100,000 to $250,000 in cash, campaign contributions and mortgage discharges, officials said. Marijuana was also exchanged for resale.

Because the letters were essential for vendors to operate, competition among applicants was fierce. Prosecutors said Mr. Correia, who was solely responsible for approving the letters, issued at least 14 of them, including two to his current girlfriend’s brother.

“In so doing, Correia publicly stated that ‘Nobody’s getting a special deal, a special anything,’” the indictment said.

Court papers did not identify the girlfriend, her brother or the marijuana vendors.

The City Council passed an ordinance last month limiting the number of marijuana licenses in Fall River, but the mayor vetoed the measure, officials said.

The mayor, now 27, with an unidentified intermediary, met with vendors in a Dunkin’ Donuts and a cigar bar, among other sites, to hash out the bribes, the indictment said.

As a result of one of the deals, the mayor, in his official city vehicle, drove to the middleman’s home four or five times and collected $10,000 to $20,000 in cash each time, the indictment said.

The indictment also charged the mayor’s former chief of staff, Genoveva Andrade, 48, of Somerset, Mass., with extortion and theft and bribery, among other charges, for what prosecutors said was her role in the marijuana vendor scheme. They also claim that she turned over a portion of her salary to the mayor in exchange for getting and keeping her job.

As they walked out, Ms. Andrade asked the vendor if everything was all right, and when the vendor said it was, she said, “You’re family now.”

Ms. Andrade, who was the mayor’s chief of staff from November 2017 through December 2018, was hired at a salary of $78,780. The indictment said she kicked back about $22,800 of her salary to the mayor over eight months as well as portions of a separate $10,000 stipend she received.

Neither Mr. Correia nor Ms. Andrade or their lawyers could be reached for comment on Friday night.

Mr. Correia pleaded not guilty in court on Friday and was released on a $250,000 secured bond, according to court records. Information about Ms. Andrade’s status was not immediately available.

In a separate scheme, the mayor secured cash and a GMT-Master II Rolex watch made in Switzerland, known as a “Batman” because of its blue and black ceramic bezel, valued at up to $12,000, in exchange for helping an unidentified middleman with a commercial property, court records said.

In that case, he directed city employees to approve permits and do excavating work on a water line for a sprinkler system at the property, the indictment said.

Last October, the mayor was charged with wire fraud and filing false tax returns in what federal prosecutors said was part of a scheme to defraud investors in an app-development company.

In those charges, which remain pending, prosecutors said he used more than $231,000 — or about 64 percent of investors’ money — “to fund his own lavish lifestyle,” including buying a 2011 Mercedes.

He denied the charges, but the City Council called for him to resign. He refused, setting in motion a recall election in March.

In that election, residents voted to recall him, but on the same ballot voters were asked to choose from five candidates for the mayor’s job. His name was on the list and he won a plurality, with about 35 percent of residents casting ballots for him.

In his first campaign, Mr. Correia championed economic development and revitalizing the downtown of the city, which once was home to a thriving textile industry that has long since declined.

The mayor’s page on the city’s website reflects that get-it-done spirit.

“‘Make It Here’ is for the dream-chasers, entrepreneurs, business owners, hungry graduates, and all those looking for reinvention in its myriad forms,” it says. “Because they can make it here, in Fall River, whether it’s a device, a dream, a destination, or the chance at a fresh start at a new day.” 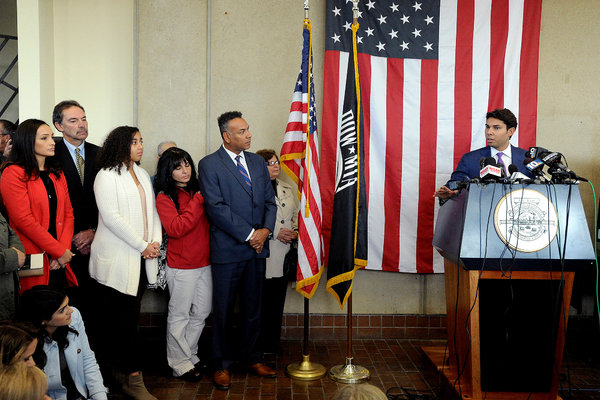 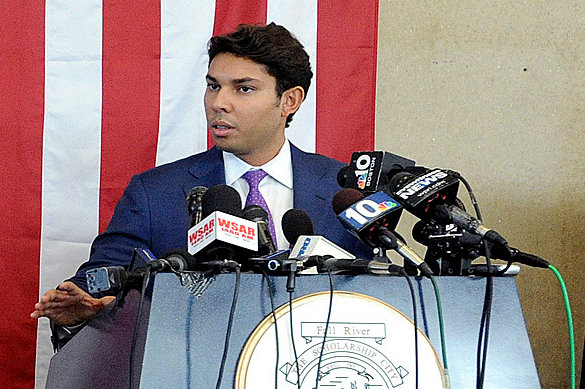 Christopher Mele, a Bronx native, is a senior staff editor. He joined The Times in 2014 on the Metro copy desk. For nearly 30 years before that, he worked as a reporter and editor at newspapers in the Adirondacks and Hudson Valley of New York and the Poconos in Pennsylvania. @MeleChristopher