WASHINGTON — The Senate moved belatedly on Tuesday toward organizing under new Democratic control after Republicans dropped their demand for a promise that the filibuster would remain intact. But the early fight over the minority’s ability to stymie legislation foreshadowed an epic battle ahead over what Democrats should do if Republicans obstruct President Biden’s agenda.

With Democrats already under pressure from progressives to bulldoze past Republican dissent and enact Mr. Biden’s top priorities — from a sweeping coronavirus aid package to legislation to tackle climate change and overhaul immigration laws — the filibuster flare-up only intensified their dilemma.

“I am glad we are finally able to get the Senate up and running,” said Senator Chuck Schumer of New York, the majority leader, adding that Democrats intended to pursue “big, strong, bold action” over Republican resistance if necessary.

“The work must move forward, preferably with our Republican colleagues, but without them if we must.”

The movement came after Senator Mitch McConnell of Kentucky, the minority leader, abandoned his insistence that Democrats commit to keeping the filibuster, a demand that had effectively held hostage their ability to take control of Senate panels as the new majority.

Mr. McConnell ultimately capitulated based on assurances from two centrist Democratic senators who have long said they would not join their party in any effort to overturn the filibuster — and whose opposition would prevent Democrats from doing so in a Senate split 50 to 50. But his surrender did not mollify progressive activists who have long clamored for Senate Democrats to curb the procedural weapon. They promised to keep the pressure on in their campaign to end the filibuster — which effectively requires 60 votes to advance legislation — through advertising and other advocacy efforts.

“It is a good win, but it is also just a start,” said Stasha Rhodes, campaign director for the group the District of Columbia statehood group 51 for 51 and a leader of the Just Democracy coalition, an assembly of dozens of racial and social justice organizations seeking structural changes in American government. “It was the first battle in a very long war. We didn’t win the election to lose the next four years.”

Just Democracy was behind a new billboard in Times Square urging the abolishment of the filibuster, calling it a Jim Crow relic in an effort to tie it in the public’s mind to its past use by segregationist lawmakers to block civil rights legislation.

Though Mr. McConnell expressed confidence in the pro-filibuster pledges by the Democratic Senators Joe Manchin III of West Virginia and Kyrsten Sinema of Arizona, he seemed to recognize that the fight was far from over. In a detailed floor speech, he painted a grim picture of the Senate should Democrats try to change the filibuster, promising that Republicans would use their minority muscle to paralyze the chamber in response. The outcome, he said, would doom the Democratic agenda.

“If the Democratic majority were to attack the filibuster, they would guarantee themselves immediate chaos,” Mr. McConnell warned. “If this majority went scorched earth, this body would grind to a halt like we’ve never seen.”

“Taking that plunge would not be some progressive dream,” he said of abolishing the filibuster. “It would be a nightmare. I guarantee it.”

Several Democrats said it was up to Mr. McConnell and his fellow Republicans to determine whether the filibuster comes under threat, arguing that if the minority party sought to block Mr. Biden’s agenda at every turn, it would be at fault for destroying the storied Senate weapon.

“I’m focused on the Senate passing legislation that addresses the pandemic, the economy, our defense and our environment,” said Senator Jack Reed, Democrat of Rhode Island. “The onus is on Senate Minority Leader McConnell. He can either be a constructive part of that effort or create a wall of partisan obstruction and further threaten the Senate’s traditions.”

Despite the appeal for cooperation, Democrats were bracing for rigid Republican resistance to many Biden proposals. Senate Republicans across the spectrum have raised concerns about elements of Mr. Biden’s proposal for $1.9 trillion in additional pandemic recovery programs.

In response, Democrats are preparing to advance the recovery legislation under a process called reconciliation that is not subject to a filibuster. But the complex budgetary rules involved limit what type of proposals can be included. Mr. Schumer emphasized Tuesday that the party retains all options to push legislation.

Some progressives said Mr. McConnell’s effort to protect the filibuster before the Senate was organized backfired by focusing attention on the tactic and the likelihood that Republicans would be relying heavily on it to slow Mr. Biden’s initiatives. He also infuriated Democrats who were eager to take over the committee gavels they were entitled to after election wins gave the party control of the Senate. They found having Mr. McConnell, relegated to minority leader, still standing in their way galling.

“Senator McConnell’s failed attempt to seize power from the minority has made filibuster elimination more likely than ever before,” said Eli Zupnik, a spokesman for Fix Our Senate, another group opposing the practice. “In his attempt to divide Democrats and kill the Biden legislative agenda before it even got started, Senator McConnell managed to unify Democrats in opposition to his brazen gambit and highlight just how willing he is to obstruct anything and everything.” 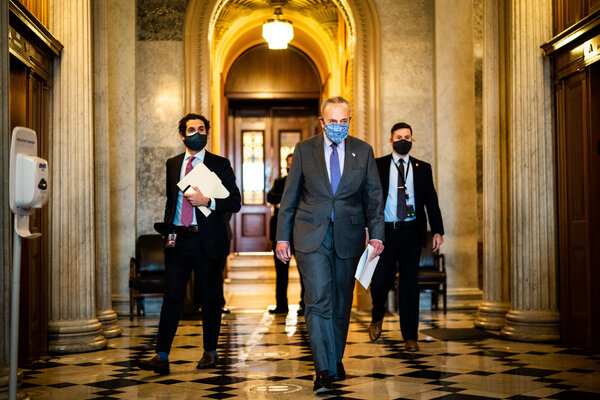 Democrats had never considered eliminating the filibuster so early in their new tenure in the majority, knowing that they lacked the votes to do so. But Mr. Schumer also could not take the threat off the table or allow the impasse with Mr. McConnell to go on indefinitely. His concession spared Democrats a difficult decision.

Past fights over the filibuster have shown that deals to avert major changes in the way the Senate does business eventually fall part as senators and circumstances change. The conflicts also usually take some time to build to a showdown as lawmakers must reach a point where even reluctant senators are willing to overturn long-established precedents.

The substance of the legislation at stake would be also be a factor, and Democrats would have to judge whether the risks of depriving themselves of a powerful tactic when they lose their majority would be worth the policy rewards.

In 2005, when Republicans were threatening to eliminate the 60-vote threshold for nominations after Democrats blocked a series of Bush administration appeals court nominees, a bipartisan “Gang of 14” emerged to fashion a compromise.

But the agreement gradually disintegrated over the years, and another crisis emerged in 2013 when Republicans blocked multiple Obama administration nominees to the United States Court of Appeals for the District of Columbia Circuit. After first agreeing to preserve the filibuster, Democrats failed to break a Republican blockade led by Mr. McConnell, and months later killed the 60-vote threshold on most judicial nominees.

On Tuesday, Mr. McConnell reminded Democrats that he had warned them at the time that they would regret the move, and he pointed to the scores of federal judges and three Supreme Court justices Republicans put on the bench during the Trump years.

“This gambit would not speed the Democrats’ ambitions,” he said of the push to gut the filibuster. “It would delay them terribly.”

For now, Democrats seem willing to take their initial win over Mr. McConnell. But they have retained the option of taking aim at the filibuster if they find Republicans engaging in what they determine to be unwarranted obstruction.

“We are united in that we need big, bold change in America,” Mr. Schumer said Tuesday, “and we will figure out the best way to get that done.”