CHICO, Calif. — The first major rainstorm in months brought misery and jubilation Wednesday to a region of Northern California decimated by a firestorm that raced through towns in the Sierra Nevada foothills and sent choking smoke across a large swath of the state.

The rain, which was expected to intensify on Thursday, is helping to extinguish the so-called Camp Fire, the deadliest in the state’s history, firefighters said. By Wednesday afternoon, the storm had already cleared the air of smoke that had closed many schools.

But the rain also brought potentially treacherous conditions to firefighters working in steep ravines as they try to stamp out the fire’s remnants, said Scott McLean, the deputy chief of the California Department of Forestry, known as Cal Fire. And it multiplied the suffering of the evacuees, some of whom have been living outside.

“I’ve had mice in my tent, spiders, it’s freezing at night and now this rain,” said Amy Sheppard, 38, who lost everything when the firestorm swept through the town of Magalia. She is sleeping in a tent encampment in Chico, the city in the Sacramento River Valley nearest to the destroyed communities. “I’ve been crying so much I can’t cry no more,” she said.

Ms. Sheppard said she had resisted going to one of the half-dozen Red Cross shelters in Chico after reports of dozens of people sickened by viral gastroenteritis. “I clearly can’t stay here,” she said of the tent encampment, which sits next to a Walmart parking lot. “Now I just don’t know what to do.”

Closer to San Francisco, a three-and-a-half-hour drive away, the rain brought outbursts of joy.

“I’ve never been so happy for a storm!!” Martin Ortiz, the executive producer of a Bay Area television newscast, wrote on social media. Rain was also forecast later Wednesday for areas of Southern California affected by another blaze, the Woolsey Fire, which destroyed hundreds of homes west of Los Angeles.

Most areas around San Francisco have not had rain since March, said Bill Rasch, a meteorologist with the National Weather Service in Sacramento. The constant threat of fires and the pall of smoke — at one point Northern California had the worst air quality on the planet — had caused many Bay Area residents to flee the area. 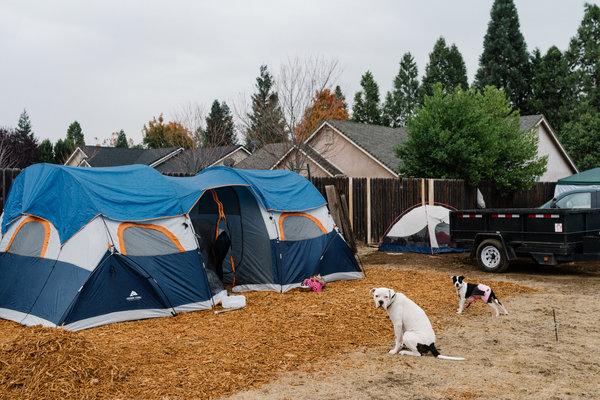 California summers are almost always dry, but the rainy season begins in October and by this time of year, Mr. Rasch said, Northern California should have received around 10 percent of its precipitation.

“We had dry winds and low humidities — and it extended that dry period,” Mr. Rasch said. It also created ideal fire conditions. Driven by extreme winds, the Camp Fire swept through the town of Paradise on Nov. 8, burning more than 153,000 acres and destroying more than 13,500 homes. The death toll, already at 81, is likely to rise. The fire is now about 80 percent contained.

Years of drought have parched California’s forests, killing more than 100 million trees this decade. Although a wet winter two years ago helped fill the state’s reservoirs, most of California is classified as being in a “moderate drought.”

Now with the storm, meteorologists are worried that heavy rain could trigger mudslides.

Mr. McLean of Cal Fire said firefighters have cut paths into steep hillsides to help arrest the fire and are now concerned with the stability of paths and dangers to those working in the area.

“You’ve gone from dirt to mud,” he said. The rains will also flush the toxic ash and debris from the fires into storm drains and waterways.

In the tent encampment in Chico, there was both despair and resolve.

James Steen, a roofer and truck driver who was unemployed when the wildfire destroyed his home in a rural area near the town of Paradise, said he planned to remain in his tent.

Mr. Steen said he preferred living under the open sky even if it meant feeling cold and damp.

“Here I got access to people in the same dilemma as me,” Mr. Steen said. “We talk, share a cigarette, keep each other company.”

“I’m just glad to be alive,” he added. “If I survived the fire, I can survive the rain.”