Chief Darren Krull of the Elwood Volunteer Fire Department died in a car crash during a fire that has scorched some 30,000 acres in two days. 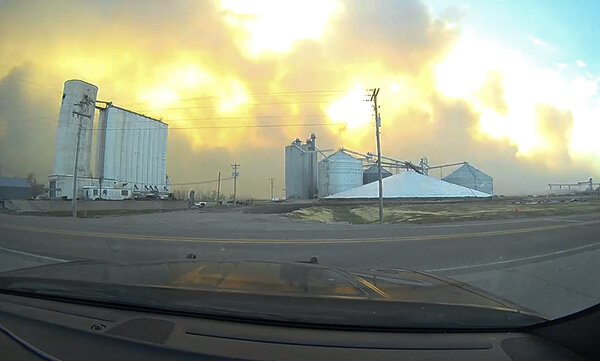 A fire chief in Nebraska was killed while responding to a wildfire that has burned nearly 30,000 acres in the south-central part of the state, destroying farms and prompting evacuations, officials said.

The chief, Darren Krull of the Elwood Volunteer Fire Department, died on Thursday when the S.U.V. he was traveling in crashed into a water truck in “zero-visibility conditions” created by the smoke, the Nebraska State Patrol said in a statement.

Mr. Krull, 54, was in the passenger seat of a Ford Expedition driven by Justin Norris, the Phelps County emergency manager. Mr. Norris, 40, was in stable condition at a hospital in Omaha on Friday. The water truck driver, Andries Van Aswegan, 28, was also responding to the fire and was not injured in the crash.

The fire in Gosper and Furnas Counties was 30 percent contained on Saturday morning, according to Alyssa Sanders, coordinator for the State Emergency Response Commission.

About 40 fire departments in the state and the Nebraska National Guard were responding to the fire, which destroyed eight houses and 48 outbuildings as it blazed across the rural area. Gov. Pete Ricketts issued an emergency declaration on Friday to make state resources available to aid in the fire response.