When officials at the Long Island Jewish Medical Center asked for staff volunteers to be among the first to take the coronavirus vaccine, Sandra Lindsay raised her hand.

Because of lingering skepticism about the vaccine, even some on her own staff, Ms. Lindsay, the director of critical care nursing, said she wanted to lead by example — particularly as a Black woman who understands the legacy of unequal and racist medical treatment and experimentation on people of color.

“That was the goal today,” she said in a phone interview on Monday. “Not to be the first one to take the vaccine, but to inspire people who look like me, who are skeptical in general about taking vaccines.”

Shortly after 9:20 a.m. on Monday, Ms. Lindsay, 52, became one of the most famous nurses in the United States when state officials said she was the first person in the country vaccinated for the coronavirus.

“It feels surreal,” she said. “It is a huge sense of relief for me, and hope.”

“We’ve seen well over 100,000 Covid patients, and at one point back in April, we had over 3,500 patients in our hospitals. And as you said, we are the largest health system in New York. And we are very, very proud of our front-line staff and, of course, of the front-line staff of all of the, in all of the hospitals and all of the facilities across the region — their spectacular work. And as you said, they are the real heroes.” [applause] “When they use the word heroes, we don’t mean that lightly, we mean it deeply and sincerely. What you do, showing up every day, you really are heroes and we wish you and your families a blessed holiday season.” 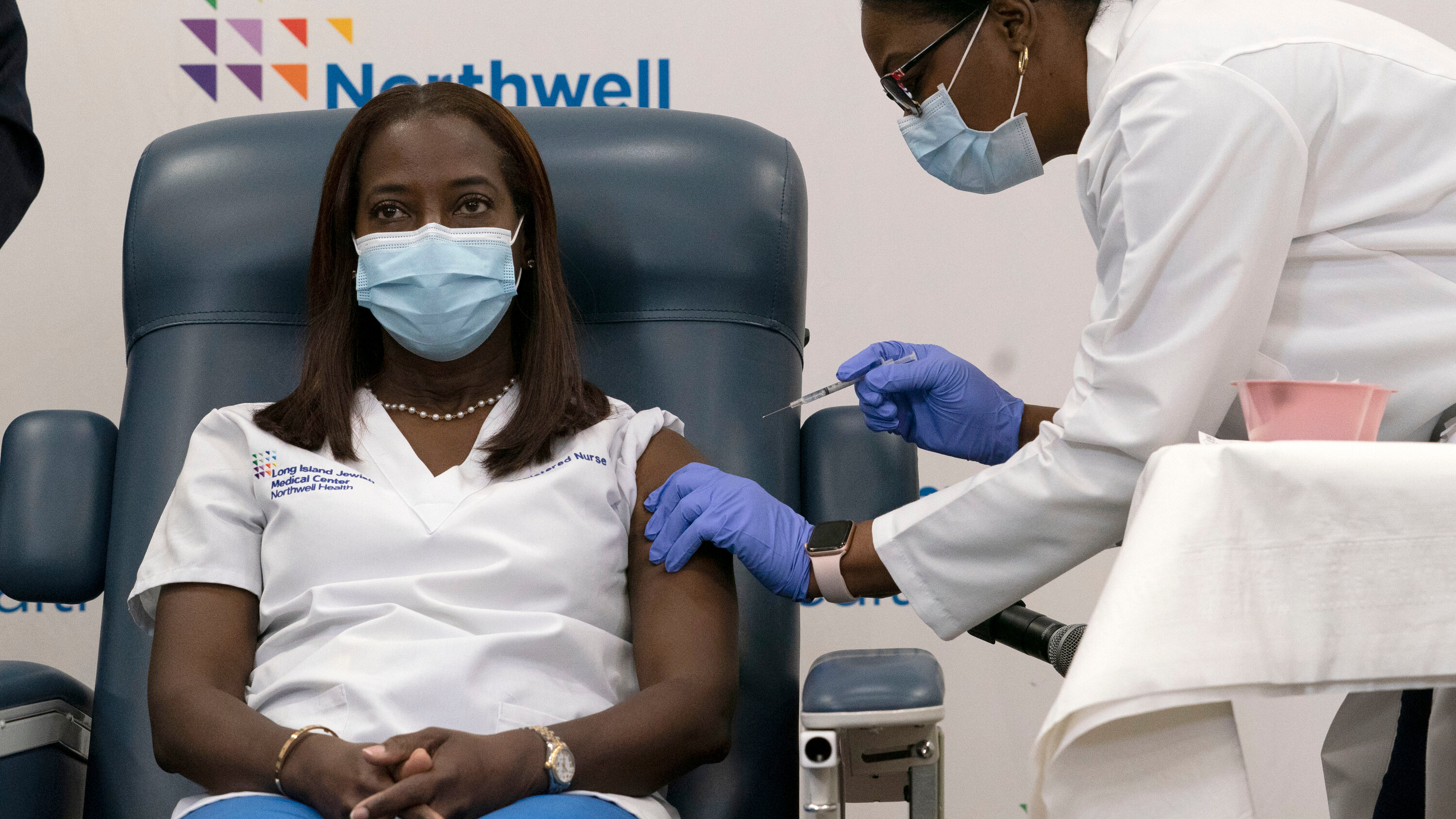 Growing up in Jamaica, before she immigrated to the United States 30 years ago, Ms. Lindsay helped take care of her grandmother, her primary caregiver, who had hypertension and diabetes. She was often asked by teachers what she wanted to be when she grew up. The answer was always: a nurse.

After moving to New York, she went to community college and then to Lehman College in the Bronx for her nursing degree.

She went to work at Lenox Hill Hospital in Manhattan and rose through the ranks until she became the director of critical care nursing at Long Island Jewish Medical Center, part of the Northwell Health network, in 2016. Still, nothing quite prepared her for her moment in the spotlight on Monday.

Her vaccination at the medical center on the Queens-Long Island border was streamed into Gov. Andrew M. Cuomo’s news conference and televised live on CNN, on the first day of distribution across the country.

“This is a historic moment, potentially the beginning of the end,” Michael Dowling, president and chief executive of Northwell Health, said of the vaccination that could begin to bring under control a pandemic that has killed more than 35,000 New Yorkers in the state.

During the first wave of the pandemic, Ms. Lindsay led a team of hundreds of critical care nurses as the hospital coped with waves of extremely ill Covid-19 patients. Between March and May, the hospital opened six new intensive care units, expanding its intensive care capacity to about 150 patients at a time, more than triple its usual number.

Ms. Lindsay worked on the floor alongside her staff, helping to rotate patients on their beds, bathe them and get them what they needed, she recalled. The amount of suffering and illness she saw, while deploying and managing her own staff and dozens of travel nurses from around the country who helped assist, was “unbelievable,” she said.

The second person to be vaccinated, Dr. Yves Duroseau, the chair of emergency medicine at Lenox Hill Hospital in Manhattan, also hoped to be a role model. As a frontline emergency medicine physician, he is at high risk. He wanted the staff of doctors, nurses and other health care workers that he oversees to follow his example, he said.

Also vaccinated on Monday was Stephanie Cal, a critical care nurse who works on Ms. Lindsay’s team — and who called her an “awesome” manager during the crisis.

“We were just trying to play it by ear at some points, and she really just tried to keep us safe, and keep the patients well cared for in unprecedented times,” she said.

Ms. Lindsay said she was not trying to make history but had volunteered in an effort to appeal directly to men and women of color who are skeptical of vaccinations in general. She mentioned the legacy of the Tuskegee study, which began in 1932 and withheld treatment from Black men with syphilis to analyze the effects.

She said that she wanted everyone to know that the coronavirus vaccine was critical in keeping all New Yorkers safe.

“It is rooted in science, I trust science, and the alternative and what I have seen and experienced is far worse,” she said. “So it’s important that everyone pulls together to take the vaccine, not only to protect themselves but also to protect everyone they will come into contact with.”

After getting the shot this morning, her arm hurt, “just like I got the flu shot,” she said. Otherwise, she felt fine.

For Ms. Lindsay, the first months of the pandemic were grueling not only because of her nursing work, but also because her first grandson, Avery, was born prematurely in March. But the nurses and doctors at N.Y.U. Langone Health in Manhattan got him through, and he is now doing well, she said.

Ms. Lindsay lives in Port Washington, Long Island, and has one son and six brothers and sisters. She has an M.B.A. and is working on a doctorate in health sciences. She said she is an avid gardener and likes to read, be outside and work out.

“That’s what kept me going during the spring, actually, just being able to get a workout in once every now and again,” she said.

Through the summer things were relatively quiet in the hospital’s intensive care units, but in recent weeks, as the second wave of the virus hit, the Covid-19 patient load has been ticking up. There are now about a dozen patients intubated, and others on oxygen, Ms. Cal said.

“We are courageous, but obviously, the team is fearful,” Ms. Lindsay said. “And so today marks a significant step in eradicating this pandemic once and for all, bending that curve and keeping it down.”