On Tuesday the Vatican released a massive report investigating how Theodore E. McCarrick, a disgraced former cardinal and archbishop of Washington, rose to the heights of the Catholic Church, despite leaders receiving reports that he had sexually abused minors and adult seminarians over the course of decades.

Here are five takeaways from the report:

Pope John Paul II personally made the decision to elevate Mr. McCarrick even after a U.S. cardinal warned that he had been accused of sexual misconduct.

In 1999, when Mr. McCarrick was being considered to take over the Archdiocese of New York, Cardinal John O’Connor of New York wrote a six-page letter to the Vatican’s ambassador to the U.S. He raised concerns that Mr. McCarrick had asked young adult men to sleep in his bed with him and that some priests had experienced psychological trauma from Mr. McCarrick’s inappropriate behavior.

“I regret that I would have to recommend very strongly against such promotion, particularly if to a Cardinatial See,” Cardinal O’Connor said. “Nevertheless, I subject my comments to higher authority and most particularly our Holy Father.”

Vatican leaders shared the assessment with Pope John Paul II. But the pope dismissed the allegations after Mr. McCarrick wrote him a letter directly denying them, and he elevated Mr. McCarrick anyway to the Archdiocese of Washington, one of the most prominent positions in the country. “McCarrick’s direct relationship with John Paul II also likely had an impact on the Pope’s decision making,” the report said.

Pope John Paul II initially requested an investigation into the allegations, but the Vatican now suggests that it was deceived by three bishops in New Jersey, who provided “inaccurate and incomplete information" to the Holy See, the report said.

“This inaccurate information appears likely to have impacted the conclusions of John Paul II’s advisors and, consequently, of John Paul II himself,” the report said, shifting some of the blame.

The allegations were dismissed as “rumor,” the report said, and “McCarrick’s denial was believed.” The bishops were also asked to keep that inquiry a secret.

The report also describes a disturbing account from a New Jersey priest, Msgr. Dominic Bottino, who said he had witnessed two of the New Jersey bishops watch Mr. McCarrick touch a man’s crotch in 1990, and neither informed the pope of that incident.

Pope Benedict XVI ousted McCarrick as archbishop of Washington, but declined to investigate him. 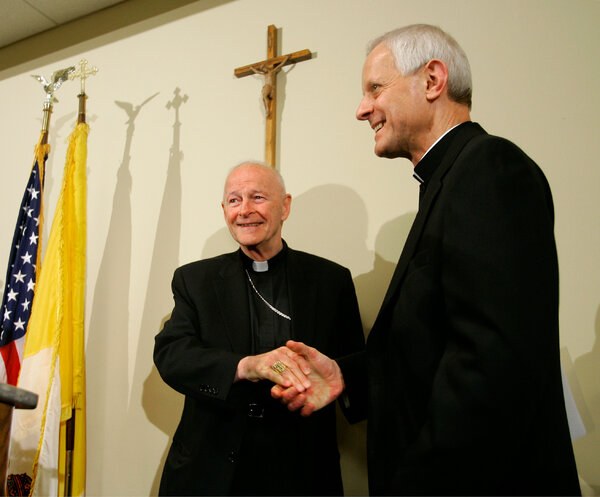 But he reversed course by the end of the year, based on “new details” about allegations against Mr. McCarrick, and “urgently sought” to replace Mr. McCarrick in the role. By Easter 2006, Mr. McCarrick was out.

Archbishop Carlo Maria Viganò, an official in the Holy See’s Secretariat of State, wrote two letters in 2006 and 2008 urging a church investigation of rumors about Mr. McCarrick. Instead of formally investigating the claims, however, Benedict XVI authorized a Vatican official to “appeal to McCarrick’s conscience” and ask him to “maintain a lower profile and minimize travel.” But this request was not a formal command, and Mr. McCarrick continued to freely travel the globe on behalf of Catholic causes and institutions.

Archbishop Viganò became the Vatican ambassador to the United States in 2011, and was asked to conduct an inquiry to determine whether the allegations against Mr. McCarrick were credible. The report says that “Viganò did not take these steps.”

Pope Francis did nothing until 2017 because he believed the allegations had already been reviewed by Pope John Paul II.

Pope Francis was aware there were rumors of wrongdoing, but until 2017, the report said, no one provided him with any documentation of the allegations. Pope Francis believed everything had already been reviewed by Pope John Paul II. He also knew that under his predecessor, Benedict, Mr. McCarrick had remained active, and so he saw no need to alter the church’s approach.

In June 2017, the Archdiocese of New York learned of an allegation of sexual abuse by Mr. McCarrick of a minor decades earlier. Soon after, Pope Francis requested Mr. McCarrick’s resignation from the College of Cardinals.

It is extremely unusual for the Vatican to investigate its highest leaders like this.

Pope Francis first promised a “thorough study” of the Vatican’s handling of the McCarrick case in 2018. The long-awaited result is a highly unusual public investigation of abuses and cover-ups spanning decades and reaching to the highest levels of the Vatican’s own ranks.

The report will have wide implications for a global church that has been roiled for decades over its mishandling of sexual abuse by clergy.

John Paul II is not just a pope — he is also a saint. At his fast-tracked canonization mass in 2014, Pope Francis praised him as “the pope of the family.”