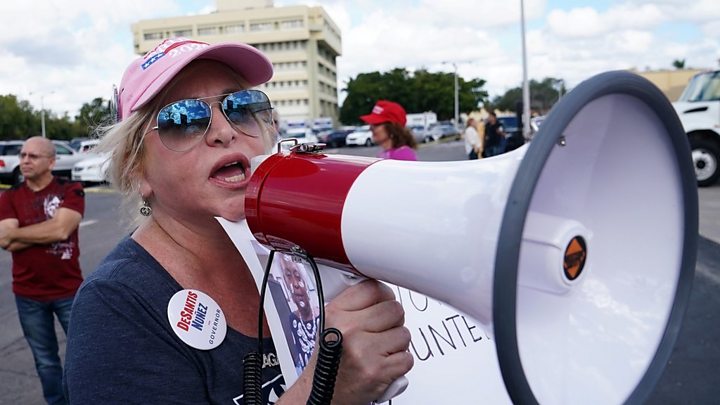 Republican governor of Florida and US Senate candidate Rick Scott is recusing himself from his role certifying state elections, including his own.

The announcement came after his rival, Democratic Senator Bill Nelson, sued to extend a deadline for the recount to be completed across the entire state.

Election officials are rushing to count votes to determine who won the offices of state governor and US senator.

Both races are divided by extremely narrow margins, triggering the recount.

As governor, Rick Scott sits on the state’s canvassing commission, a three-person board that confirms the results of federal, state and county elections.

The League of Women Voters and Common Cause, a progressive group, had already sued to block Mr Scott from participating in the recount, which was automatically triggered when neither candidate won by at least 0.5% of the vote.

Mr Nelson’s lawsuit requests that all of Florida’s 67 counties be given adequate time to finish “a legally mandated and accurate recount,” according to the senator’s campaign.

It also calls upon Mr Scott to recuse himself from “any role” in the recount process.

His lawsuit was filed in the state capitol of Tallahassee on Tuesday, after Mr Nelson spoke alongside Democratic Majority Leader Chuck Schumer at a press conference in Washington.

I recused myself from certifying results on the Elections Canvassing Commission in 2014, and I will do so again this year. This is nothing new. Bill Nelson is confused and doesn’t even know how Florida works- I have no role in supervising/ overseeing the ongoing recount process.

“Governor Scott needs to recuse himself in the recount and do it now,” New York Senator Chuck Schumer told reporters in Congress as Mr Nelson stood by his side.

“He’s a contestant in this election and can’t possibly be trusted to be a natural and fair arbiter as the votes are tallied.”

On Wednesday, Mr Scott also took to Capitol Hill where he met with Republican lawmakers that he hopes to join as a colleague once the final vote is certified.

Mr Nelson – who is seeking a fourth term as senator – is currently trailing Mr Scott by about 0.14% of the vote, according to US media.

How is the recount going?

Since officials declared a recount on Saturday, local election officials have raced to tally votes by machine, and if that fails, by hand.

One of the largest countries in Florida, Palm Beach County, saw one of their machines overheat, leading to speculation that the recount will not be completed by the Thursday deadline.

County Supervisor of Elections Susan Bucher told the Associated Press the machines are “old” and are not designed to be used around the clock.

State election officials say they have seen no evidence of voter fraud, despite claims by Republicans of Democratic attempts to cheat.

On Wednesday, President Donald Trump told conservative outlet the Daily Caller that voters may have donned disguises at the polls.

“Nobody takes anything. It’s really a disgrace what’s going on,” Mr Trump said, without citing any evidence.

The mere mention of the word “recount” can make people shudder here in Florida. Memories of butterfly ballots and “hanging chads” in the 2000 election, and a recount which ultimately delivered George W Bush the presidency, are still fresh in many minds.

Outside the yellow office block that houses the Broward County elections department where the votes are being counted, groups of protesters from both parties have been camped out for several days. The scene is a far cry from the spectacular stretches of sandy beach, a short drive away.

“If they win I’m going to think it’s fraudulent,” she adds. But what if you win, I ask her? “If we win, then I know that it was right,” she replies.

There’s no shortage of scepticism from the Democrats I meet at the other end of the car park either. Sondra Levin is holding a sign which reads “Stop GOP subverting of vote count”. She also protested here in 2000.

“It’s like déjà vu it’s very upsetting, we need to have elections where they count every vote, the Republicans are the ones trying to steal the vote, not the Democrats.”

Whatever the outcome once ballots are recounted, we can expect legal challenges. Votes matter in every election – but in Florida they matter even more.