Florida politics are never that simple, though. Republicans held on to the Governor’s Mansion and appeared to capture a Senate seat. On the other side, progressives fulfilled a long-held dream of restoring voting rights for about 1.4 million people with felony records.

And as is often the case in Florida, a swing state legendary for its wafer-thin voting margins, some of the vote counts were so close that people were still watching them on Wednesday morning. And Wednesday afternoon. By the end of the day, the Senate race was headed to — what else? — a dreaded recount, bringing back haunting memories of the 2000 presidential election.

“Florida’s being Florida,” as Representative Charlie Crist put it.

Veteran Florida politicians accustomed to tight electoral margins could shrug off the state’s whiplash-like results. But as is often the case, they baffled outsiders struggling to make sense of where Florida fit in to Tuesday’s crucial midterm elections. How could Republicans capture both key statewide seats that were up for grabs even as not one, but two, congressional districts flipped Democratic? And how could Democrats lose the governorship in Florida and win it in a state like … Kansas?

“We all have to take a deep breath here,” Senator Marco Rubio, a Republican who won his own re-election in 2016 by a very un-Florida-like eight percentage points, cautioned on Wednesday. “These elections are about as close as we can make it. When you’re winning by less than half a percentage point, these aren’t huge waves in any direction. They’re close elections, which is what we know Florida to be.”

This much was clear: Ron DeSantis, a Republican former congressman, will be governor instead of Andrew Gillum, a Democrat, though the gap between them narrowed to fewer than 47,000 votes on Wednesday.

Gov. Rick Scott, a Republican, will probably be senator, though the incumbent senator, Bill Nelson, a Democrat, trailed him by less than half a percentage point, likely triggering an automatic machine recount. (Mr. Nelson indicated that he would pursue the recount, an announcement that a spokesman for Mr. Scott called “sad.”)

It looked like State Representative Matt Caldwell, a Republican, would become agriculture commissioner, though Nikki Fried, a Democrat, lagged behind him by only .1 of a point, likely requiring an automatic manual recount. (Mr. Caldwell declared victory anyway.)

All of that missed the bigger picture, according to Mr. Crist, a former Republican governor whose politics have also tended to swing: He turned independent, then turned Democrat.

He wanted to talk about Amendment Four, a citizen-petitioned constitutional measure on Tuesday’s ballot whose passage was a momentous victory for criminal-justice reformers. Political analysts say that allowing many convicted felons to vote could eventually transform Florida’s electorate and make it lean more Democratic, since many former prisoners fit the party’s demographics.

“One-and-a-half million Floridians will be getting their right to vote. That’s a game-changer,” Mr. Crist said, and then began to imagine what that might look like. “The governor’s race, the Senate race, the commissioner of agriculture race — all of those arguably would be flipped now that this amendment passed. It could change the future of Florida for decades.”

But that, if it happened, looked to be at some point in the future. Today, for Democrats, mostly just hurt.

“Yes, it’s frustrating,” said Scott Arceneaux, a senior strategic adviser to Mr. Gillum, the Tallahassee mayor whose progressive campaign had galvanized Democrats and raised hopes that he could become Florida’s first African-American governor. Eventually, Mr. Arceneaux said, there might be more hope for Democrats in statewide races, even with the state’s notoriously close margins. 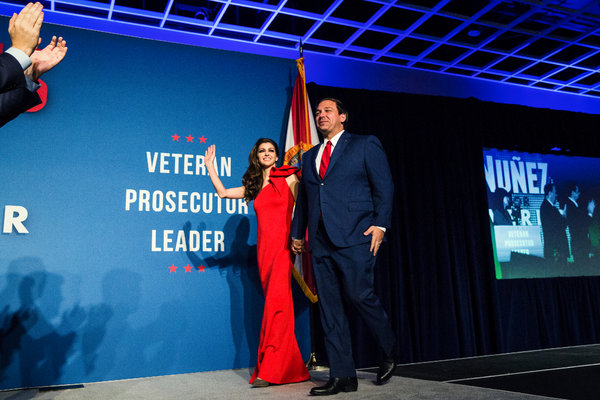 State Representative Jeanette Nuñez, Mr. DeSantis’s running mate on the governor’s ticket, said Republicans prevailed because Floridians were not ready to accept a candidate like Mr. Gillum who campaigned on hiking the corporate tax rate.

“It can’t just be all charisma and a terrible platform,” she said. “Everyone, including Ron, talked about what a formidable opponent Andrew Gillum was in terms of his ability to appeal to certain audiences and his ability to communicate with average Floridians. But that will only get you so far.”

Democrats did have some reason to cheer: Debbie Mucarsel-Powell, a Democrat, ousted Representative Carlos Curbelo, a Republican, in the 26th Congressional District. Donna Shalala, a Democrat, will replace Representative Ileana Ros-Lehtinen, a Republican who is retiring, in the 27th Congressional District. The two Miami victories helped national Democrats reclaim the House and showed the party’s muscular strength in the state’s liberal southern end.

And they helped illustrate a crucial aspect of Florida’s seeming capriciousness.

“People have to remember that Florida is about five states in one,” Mr. Curbelo said in an interview on Wednesday. “South Florida and the Panhandle, for example, don’t have very much in common, beyond environmental issues and broad economic issues. Culturally, they’re very different areas.”

Democrats ran up their numbers in the cities. Voilà: Mr. Curbelo was out. Republicans outpaced Democrats everywhere else. Voilà: The third consecutive governor’s race went Republican, but only by a single point.

“I don’t think anybody can be thrilled or depressed with these results — maybe except me,” Mr. Curbelo said with a sad chuckle.

At least one person was happy: President Trump, who mocked Mr. Curbelo (whose name he mispronounced as “Cue-bella”) for failing to embrace him. Instead, the president praised Mr. DeSantis and Mr. Scott, whom he campaigned for last week, as examples of what can happen when he decides to campaign in a state he considers his second home.

“A man who happens to be a very smart person, Ron DeSantis, was running, and people didn’t give him a chance,” Mr. Trump told reporters on Wednesday. “We did some great work,” Mr. Trump said. Then he moved on to the incumbent Republican governor’s bid for the Senate. “Rick Scott won, and I helped him.”

Winning both seats was crucial for the president: It showed that Florida remains Trump country, a stubbornly difficult state for Democrats to recapture. For all the inroads the party makes, boosting turnout to 57 percent in urban Miami-Dade and Broward counties, for example, it continues to get trounced in conservative Gulf Coast retiree havens. In Sumter County, home to The Villages retirement community, turnout reached a whopping 78 percent.

“For 20 years, the Republican apparatus in the state of Florida — if not the candidates themselves — have outperformed the state Democratic operation,” said former Representative David Jolly, a Republican who voted for Mr. Gillum.

Steve Schale, a Democratic strategist, said Florida’s election outcomes have seemed strange before — at least to outsiders. In 2004, voters approved a minimum-wage hike in the same election that they voted to elect George W. Bush. In 2008, they banned same-sex marriage, and also elected Barack Obama.

But it’s not as contradictory as some might think at first glance, in Mr. Schale’s view.

“You’ve got intractable partisan politics,” he said, “but at the same time, there is a broad consensus on a lot of things right now: People generally believe in a higher minimum wage. They generally believe in some sort of access to health care. We’re a country that believes in second chances.

“We view the world in this very binary choice, because that’s how our politics is, but for everyday Americans, I think it’s not that simple,” he said.

Ms. Ros-Lehtinen, the retiring congresswoman, said the high turnout on both sides suggested a silver lining: “a healthy democracy,” she said.

“I’m really excited that we actually have a recount in the Senate race,” she said, though she conceded she was expressing an unpopular opinion. “Florida has to stick out and be eccentric. We proved our mettle.”