Prisoners are more vulnerable than ever to the twin crises of the pandemic and a historic wildfire season. 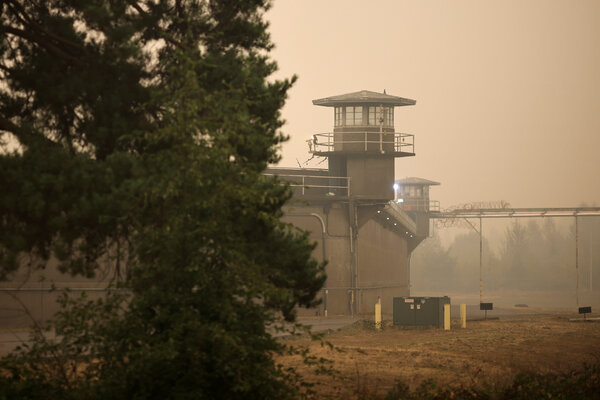 By Tim Arango and Nicholas Bogel-Burroughs

As wildfires tore through huge swaths of Oregon this week, prisoners were hurried away from the encroaching flames — not to freedom but to an overcrowded state prison, where they slept shoulder-to-shoulder in cots, and in some cases on the floor. Food was in short supply, showers and toilets few, and fights broke out between rival gang members.

They were safe from one catastrophe, but delivered to another: the coronavirus pandemic, which has spread at an alarming rate in America’s prisons.

“From what we know about Covid-19, how quickly it can spread and how lethal it can be, we have to prepare for the worst,” said Bobbin Singh, executive director of the Oregon Justice Resource Center, a prisoner advocacy organization.

Twin crises of the pandemic and a devastating wildfire season have left a significant toll in prisons along the West Coast. Virus outbreaks have spread through cellblocks — Oregon’s state prison system has had 1,600 infections over the last three months — even as poor ventilation systems have whipped in smoke from the fires outside.

The dilemma for prison officials, too, is complex, as they grapple with managing large facilities through simultaneous dangers. Before the fires started, the virus spread in America’s prisons partly because routine transfers of prisoners proceeded without testing them first for the coronavirus and isolating those infected. Now fires have forced Oregon officials to move so many prisoners so quickly that some inmates and advocates for prisoners say they fear it is only a matter of time before transferred inmates begin falling sick with the virus.

“Right now, it’s this situation of, no matter which way you turn there’s something waiting,” said Rasheed Stanley-Lockhart, who was released from prison in California in January after serving 18 years for armed robbery, and now works for Planting Justice, a nonprofit in Oakland, Calif., that helps newly released prisoners. “Turn here, there’s covid. Turn here, there’s the fires. You turn here, there’s mass incarceration as a whole.”

There have been more than 200,000 coronavirus infections in American prisons and jails and nearly 1,200 deaths since the pandemic began. As the wildfires have raged, the problems have been especially acute in Oregon, where officials ordered evacuations of about 2,750 prisoners.

Kristina Boswell, a prisoner in Oregon who was moved overnight on Friday from a state prison in the fire zone to one away from the threat of fires, described a chaotic evacuation in an audio recording her lawyer shared with The Times. She said prisoners were bound together with zip-ties and loaded into buses in the middle of the night, without their medications or water. When they arrived at the new prison, she said, there was a shortage of mattresses and no chance of social distancing.

“We’re all in dorm settings,” said Ms. Boswell, who was among more than 1,300 female prisoners moved to Deer Ridge Correctional Facility in Madras, Ore. “Everyone is crammed in.”

Ms. Boswell said prisoners were watching newscasts of the fires, and worried about their families outside. She said prisoners had gone almost 24 hours without food.