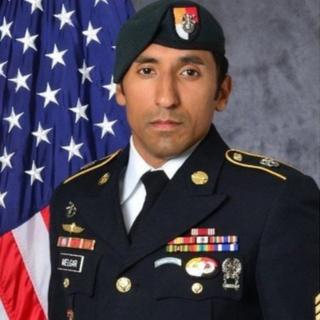 The US Navy has charged four elite members of US Special Forces with murdering a US Army soldier in the west African country of Mali last year.

They allegedly cut the victim’s throat to appear as if they tried to perform a life-saving operation on him.

The charges do not name the accused men or provide a motive.

What are they accused of?

Military investigators say that the four accused service members broke into Staff Sgt Melgar’s private bedroom in Bamako, Mali’s capital, while he was sleeping with the intent to bind him with duct tape.

One of the elite troops put Staff Sgt Melgar in a fatal chokehold that was “inherently dangerous to another and evinced wanton disregard for human life,” according to the charge sheets, which were released on Thursday.

Two of the men told investigators they attempted CPR and tried to perform a tracheotomy on Staff Sgt Melgar before seeking help. But a later post-mortem examination found that he died by asphyxiation.

Two of the accused are US Marines and are listed as being part of the Special Operations Command.

The other two are Navy SEALs from the Navy Special Warfare Development Group. The unit is better known as SEAL Team 6, which participated in the May 2011 raid that killed al-Qaeda leader Osama bin Laden in Pakistan.

All four are charged with felony murder, involuntary manslaughter, conspiracy, obstruction of justice, hazing, burglary, and lying to investigators.

A preliminary hearing is scheduled for 10 December.

What has the reaction been?

A spokesman for US Special Operations Command said Thursday that “we honour the memory of Staff Sgt Melgar”.

“We will not allow allegations or substantiated incidents of misconduct to erode decades of honourable accomplishments by the members of US Special Operations Command.”

Staff Sgt Melgar’s June 2017 death was kept secret for months, before it was reported by The New York Times in October.

According to the Daily Beast, which first reported on this week’s charges, the men had been having an ongoing dispute after Melgar told his superiors that his comrades-in-arms had been frequenting prostitutes and were skimming cash from a fund they kept to recruit local informants.

In a statement to the Daily Beast, Staff Sgt Melgar’s wife said: “While I have faith that the military court will handle this situation in the best possible way, I also understand that the mission continues.

“Our men must work well together, and we need to support them in doing so.”

Staff Sgt Melgar, who was originally from Texas and had previously served in Afghanistan, was a member of the same special forces group as the four Americans who were killed in an ambush in Niger in 2017.

The charges come as the Pentagon announced that they are reducing the numbers of US counter-terrorism troops in Africa by about 700.

Brexit: Cornwall fisherman discusses potential outside EU When you subscribe we will use the information you provide to send you these newsletters.Sometimes they’ll include recommendations…