A replica of the Statue of Liberty began a journey this week from Paris to New York, officials in France said, sending the United States another, much smaller monument to freedom and symbol of French-American friendship.

At under 10 feet tall, a 16th of her bigger sister’s size, the bronze statue was carefully hoisted from its place at a museum of inventions in Paris during a ceremony on Monday, according to a news release from the National Conservatory of Arts and Crafts. The statue, which weighs nearly 1,000 pounds, had been on display at the museum, Musée des Arts et Métiers, for 10 years and will be placed in a specially designed plexiglass box for its nine-day voyage across the Atlantic.

The smaller statue, based on the original 1878 plaster model by the sculptor Frédéric-Auguste Bartholdi, was installed just outside the museum’s entrance in 2011. This statue was cast using a 3-D scan of another model in Paris, the news release said. It will be exhibited on Ellis Island from July 1-5, facing its much bigger sibling on Liberty Island. Then, it will be moved to the French ambassador’s residence in Washington, D.C., where it will be on display from July 14, France’s Bastille Day, until 2031.

There are over 100 replicas of the Statue of Liberty around the world, according to the conservatory. More than 30 are in France, including a handful in Paris.

Its arrival in New York, the conservatory said, is meant to celebrate and underscore the central value of Franco-American friendship: liberty. The officials also said the gesture intended to pay tribute to those who had fought for freedom and democracy on both sides of the Atlantic. 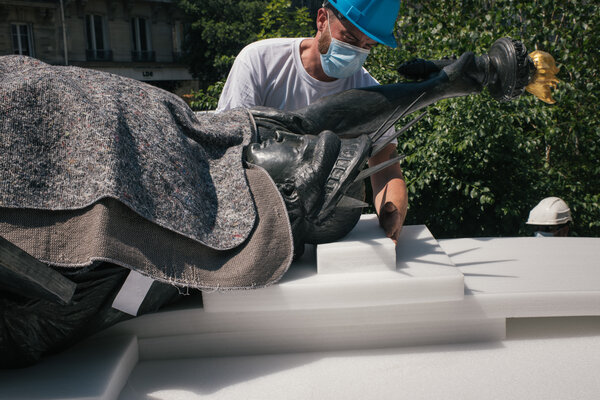 Similar ideas were behind the original 19th-century statue, which was conceived of by the legal thinker Édouard René Lefèbvre de Laboulaye, a French abolitionist known in the United States for his Civil War-era pamphlets defending the Union cause. An 1870 model of the statue depicted Lady Liberty holding broken chains in her left hand, a reference to emancipation.

The final model of the statue moved the broken chains beneath Lady Liberty’s feet, with a tablet that represented the rule of law placed in her hands instead.

The date of American Independence, July 4, 1776, is written on the tablet in Roman numerals. The sculptor, Mr. Bartholdi, based the statue’s design on the Roman goddess Libertas, who is typically depicted wearing a Phrygian cap, traditionally worn by freed Roman slaves.

On a trip to the United States, Mr. Bartholdi chose what was then Bedloe’s Island — it was renamed Liberty Island in 1956 — because of its visibility to ships entering New York Harbor. The statue’s pieces were constructed in France in the 1870s, and assembled and displayed in Paris from 1881 to 1884.

The smaller statue will have a much simpler journey to the United States than its larger predecessor, which stands 151-feet tall on top of a 154-foot-high pedestal. The 19th-century statue had to be taken apart to be shipped across the Atlantic, arriving in June 1885. Its pedestal was finished a year later, and its pieces reassembled around an iron frame. Finally, it opened to much fanfare on Oct. 28, 1886 — despite bad weather.

“The recent and huge structures at the lower end of Manhattan Island, at a distance from which the details are lost and the outlines and masses are alone visible, make New York a fit background for the most sumptuous aquatic spectacle,” The New York Times reported at the event.

About six years later, the government opened Ellis Island, the inspection site that more than 12 million immigrants would pass through in the decades to come. Emma Lazarus’s famous poem “The New Colossus,” describing the statue welcoming the “huddled masses yearning to breathe free,” was affixed to the statue’s pedestal in 1903.

The U.S. Embassy in France shared a video on Twitter this week of a crane lifting the statue into the air as workers below carefully held on to it with straps.

At a ceremony marking the occasion, Liam Wasley, an acting deputy at the embassy, said, “This Atlantic crossing renews and strengthens our shared attachment to what we believe in, the foundations of our relationship.”