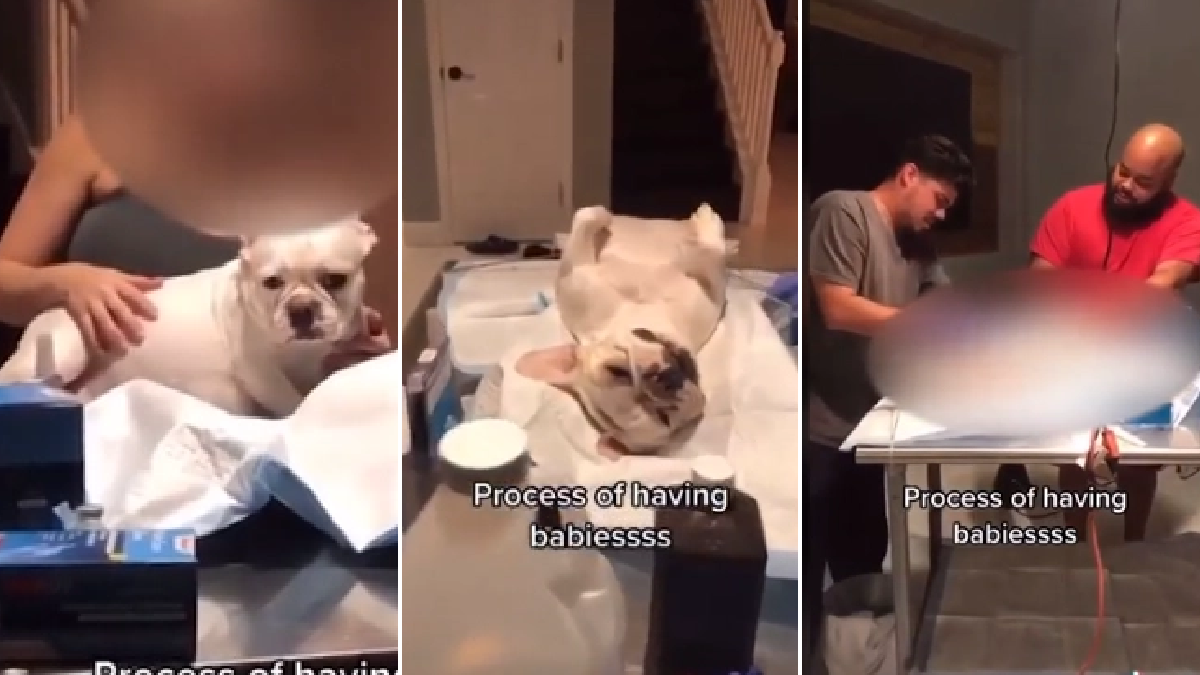 A pregnant French bulldog writhed in pain before dying after being cut open for a cesarean by a fake surgeon in a money-saving operation shared on TikTok. Horrific footage showed the pale-colored pet squirming with pain while being butchered on a table at a house in Lake County, Florida, earlier this month.

The clip, titled ‘Process of having babiessss’ began with the confused-looking dog being petted, before being turned over onto her back and sliced open. She was not sedated before the makeshift surgery, it is alleged.

The animal’s suspected torturers have since been arrested, and were named by police as ‘vet’ Frankie Huertas-Rivera, 33, and owner Larry Colon. Colon is said to have tried to save money on a c-section by paying Huertas-Riveras to perform it.

He claims Huertas-Riveras told him he was a qualified veterinarian, and paid $650 cash for the op. Shockingly, Colon’s 15 year-old daughter is said to have filmed the torture inflicted on the dog, before sharing it on TikTok. Other youngsters are said to have been present while the pet was disemboweled.

The abuse was first revealed by WESH, who covered up much of the surgery video to avoid upsetting viewers.

Afterwards, the French bulldog was rushed to a local veterinarian’s office for emergency treatment, but was dead by the time she arrived.

Two unborn puppies were found dead inside her. Eight other pups are said to have lived through the horrific botched operation which killed their mother.

Police were called, with a veterinarian who examined the mother dog and dead puppies saying both ‘suffered unjust cruelty and suffering due to the unethical medical services performed.’

Huertas-Rivera and Colon have both been arrested on animal cruelty charges. Investigators claim Colon knew full-well that Huertas-Rivera was not a fully-qualified veterinarian.

They are due in court at a later date.