The Royal Canadian Legion is going high tech in an effort to continue the poppy campaign tradition in a world where getting close to people is passé.

COVID-19 means this year veterans and volunteers can’t pin poppies on people at stores and malls across most of the country, so the Legion has partnered with HSBC Bank to create the Pay Tribute Poppy Box. The toaster-sized boxes will be at HSBC locations across Canada and select stores in Ontario as a cashless donation box.

The poppy-filled container is distinctive because the backing is shaped like the headstone of a fallen soldier, and the front has a tap pad where users just have to tap their credit card, debit card, smartphone or smartwatch to make a $2 donation. If someone wants to donate more they simply tap again and another $2 will be charged to their account. 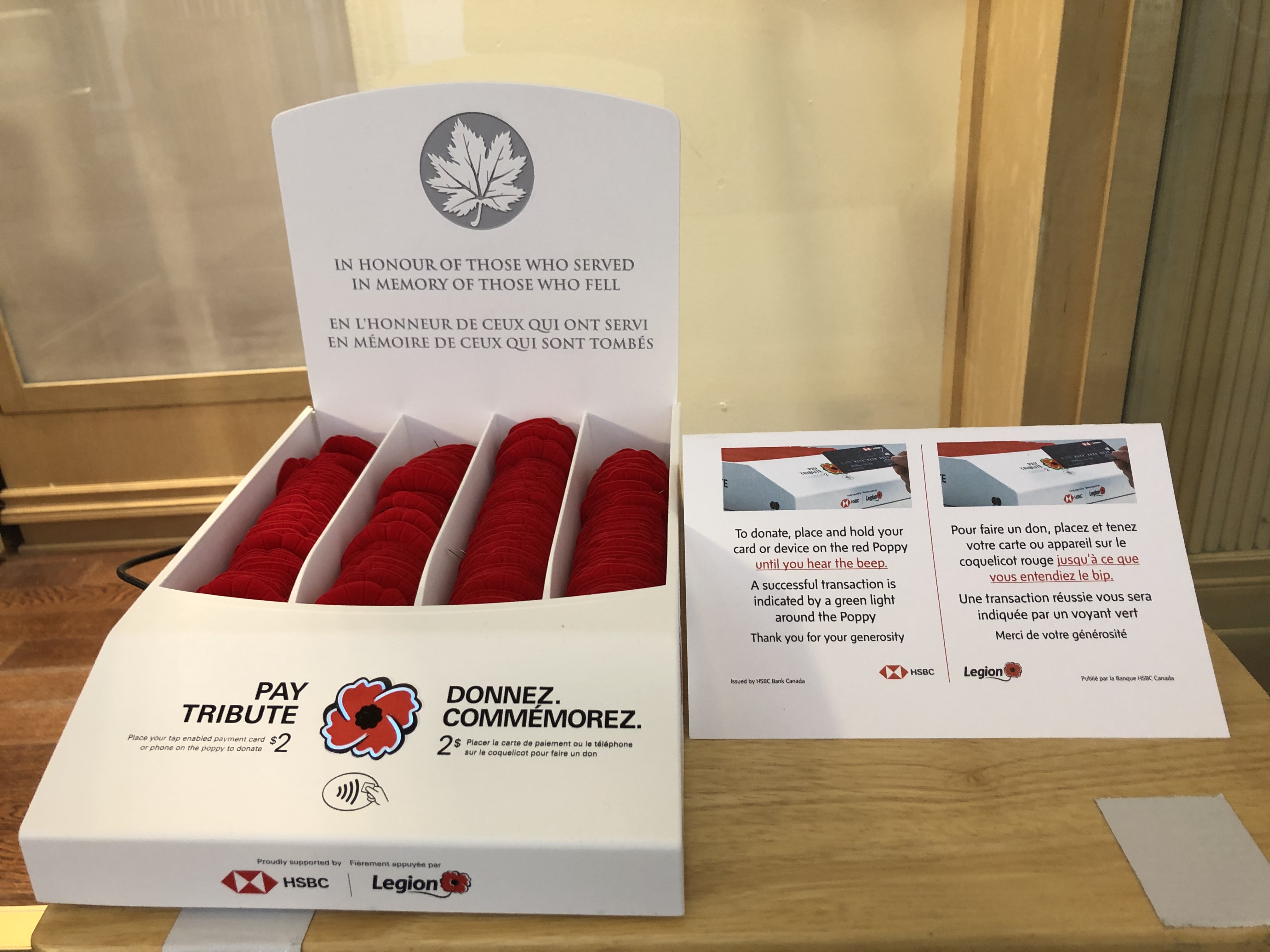 The pilot project could be expanded to more locations, but incredibly, it was started long before the pandemic made people more hesitant to handle money. In fact, when the idea began a year ago, it was to adapt to an increasingly cashless society.

“I look at my own daughter, mid-20s, she never had cash with her,” Stephen Clark, national executive director of the Royal Canadian Legion headquarters told Global News in an interview. “But she always has her phone and she always has a debit or credit card.”

It took about a year for the bank and the Legion to come up with the design which performs the transaction as quickly as when you pick up your morning coffee.

“The box has a poppy that’s glowing white. You tap it. You’ll hear a beep. The poppy will turn green and your $2 donation is made,” explains Larry Tomei, executive vice-president of NSBC Wealth and Personal banking.

The bank believes no other institution is using the technology to fundraise in this way and Tomei points out there is huge potential for this technology to be expanded to other fundraising, however, he wants the focus to be on the front-line veterans.

“We will never replace the Legion. The Legion is always out front, but we are there behind the scenes to support our veterans because they made the ultimate sacrifice,” Tomei told Global News.

Public Health guidelines and regulations have restricted the number of locations that can either welcome volunteers or the more common poppy trays and have cut back on the amount of time Legion branches can spend raising funds.

The Legion will still have a prominent presence in those places where veterans aren’t permitted to hand out poppies. In Barrie, Ont., the local legion will be manning each location with a cardboard cut-out of a veteran as a visual reminder for someone to take a poppy.

Perhaps more important though, is that the pandemic is limiting those valuable opportunities to interact with veterans.

“We’ve had more than a few comments from Legion members saying ‘I am going to miss actually pinning the poppy on the people who are so generous to make a donation,’” said Clark.

At Ottawa’s Carlingwood shopping center, Beverly Ann Kelford and Doreen Rock weren’t going to let a global pandemic get in the way of a decades-long streak of participating in the poppy campaign. Sitting behind a Plexiglas partition they now direct passers-by on how to make a donation into the poppy boxes instead of pinning them on people.

“I’m a person who likes to give a hug, I like to pin on the poppies, but we have to follow the rules,” Kelford told Global News in an interview, acknowledging that public health guidelines must be followed. “That’s the way it is because if they get sick or we get sick, it’s not a good thing either.”

Both ladies are equipped with a mask and gloves, as well as hand sanitizer which everyone must use before taking their own poppy.

The lack of interpersonal interaction as a result of the pandemic is taking some time to get used to, but both are determined to be here so that no one forgets about those who paid the ultimate sacrifice for our country.

A map charting the spread of the Brazilian Covid variant shows how it has moved across European countries which are outside the red list. The…

Pinterest’s first global advertising summit on Wednesday revealed a few surprises: Along with new ad products and growth in some surprising user segments, the company…