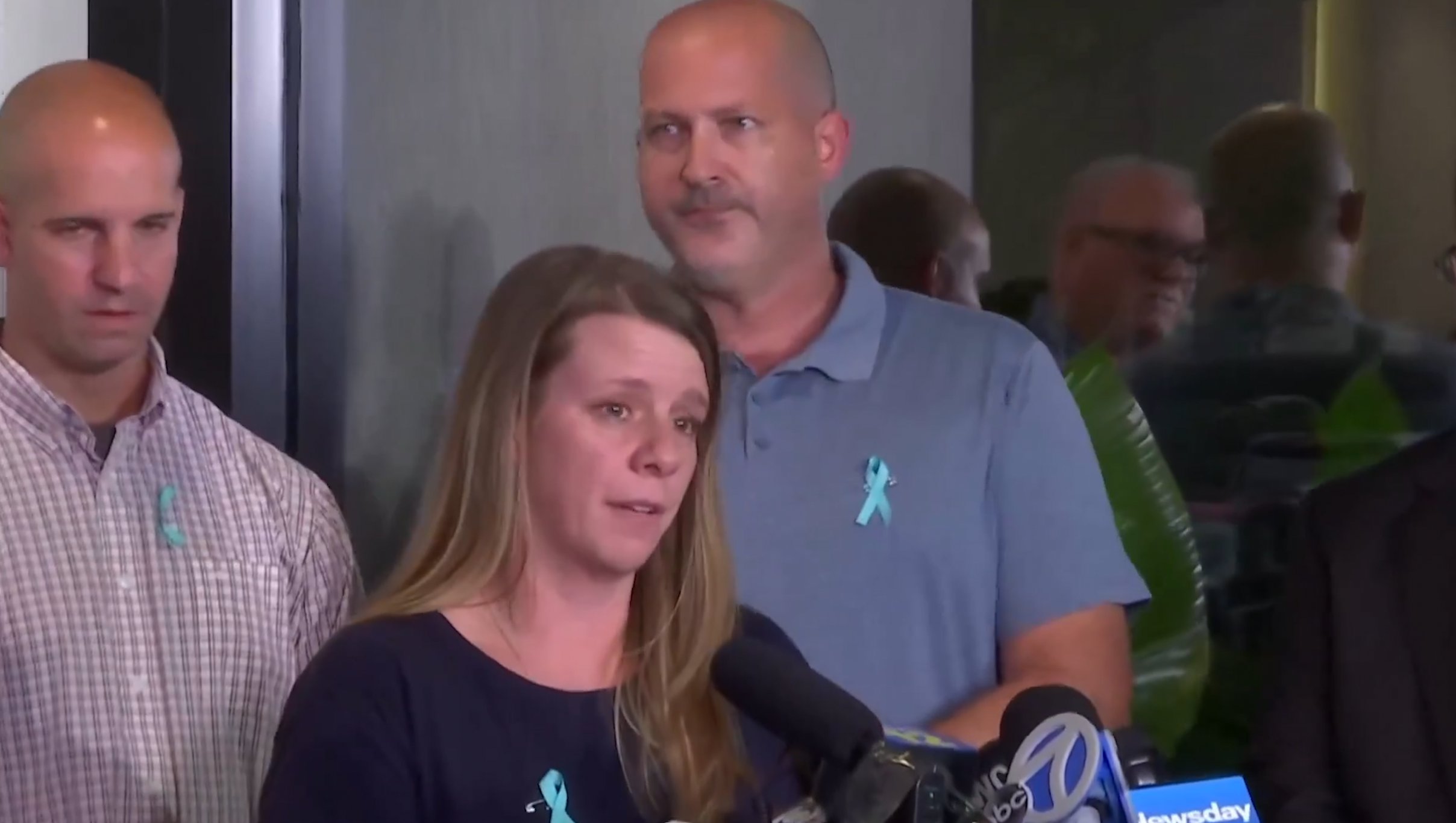 ‘We don’t stop remembering Gabby and keeping her name out there,’ her stepfather Jim Schmidt said. ‘She’s always with us every day, she’s giving us signs.’

‘We actually got behind a car yesterday and there was a Wyoming sticker and the letters were GBZ. Gabs,’ she said. ‘She’s with us. She’s with us.’

When asked if they were determined to find Laundrie, her step-father responded by saying their main priority is mourning Gabby.

‘The FBI is doing everything they can. We have our whole faith in them,’ Schmidt said.

Gabby’s parents and step-parents donned new tattoos designed by Gabby, that replicate those their late daughter had.

‘Like we said we always agreed to co-parent Gabby,’ her father Joseph Petito said. ‘I wanted to have her with me all the time,’ her mother added.

Her family also announced the creation of the Gabby Petito Foundation.

In starting the Gabby Petito Foundation the family hopes to make something good out of their families’ tragedy.

‘We’re just hoping that through our tragedy of losing Gabby that in the future something can come out of it, that we can help other people in similar situations,’ said her step-father.

Gabby’s father thanked the news media and everyone who spread the word on social media.

Despite the impactful role social media had in finding Gabby, the same cannot be said for the ongoing search for Brian, who remains missing after disappearing on September 14.

The lawyer added, ‘For Brian, we’re asking you to turn yourself in to the FBI or the nearest law enforcement agency’, as Gabby’s mother Nichole Schmidt nodded.

Speaking to reporters at a press conference held in New York at 1 p.m. Tuesday afternoon, the Petito family spoke out about their daughter’s death.

Authorities continue their manhunt for Petito’s fiancé, Brian Laundrie, a person of interest in the case of her death.

Petito, 22, was reported missing after Laundrie, 23, returned home to North Port, Florida from a cross-country road trip without her in their 2012 Ford Transit van.

The FBI later confirmed a body found in Grand Teton National Park in Wyoming was identified as Petito.

An initial autopsy ruled her cause of death a homicide.

Laundrie, who police said was initially uncooperative in the investigation, has been missing since he was declared a person of interest on September 18.

Police have been searching for Laundrie in 25,000 acre Carlton Reserve, a dense swampland in Venice, Florida. The missing man told his parents he was going to the reserve, and his family claims that was the last they had heard from him.

Police have been searching for him in a 25,000 acre swampland in Florida. The FBI visited the home of Laundrie’s parents on Sunday and removed personal items belonging to the missing man, Laundrie family attorney Steven Bertolini confirmed to CBS News.

‘The FBI requested some personal items belonging to Brian Laundrie to assist them with DNA matching and Brian’s parents provided the FBI with what they could,’ Bertolini said.

The FBI also issued an arrest warrant for Laundrie, charging him with unauthorized use of a bank card, alleging he withdrew sums of money around the time his fiancé went missing.

Petito’s memorial service Sunday drew hundreds of people to Long Island from all across the country for the service, which her family opened to the public.