GREEN BAY, Wis. — In a town that lives or dies with its Packers, the metaphor takes on a somewhat chilling hue in the middle of a pandemic.

So, on a game day when the Packers were taking it to the Texans in Houston, the scene back home was noticeably subdued, as the coronavirus surged in Wisconsin and people mostly avoided the bars that are usually jammed when the Packers are playing.

“You can’t even really tell that there’s a game,” lamented Jon Cooper, a 31-year-old machinist who was having a beer with friends at Cropsey’s on State, an indoor bar about a mile and a half from Lambeau Field, where the Packers play home games. No one wore masks except the bartenders, and about 30 people crowded together around the bar, leaving most of the room empty.

Still, that was busier than most other places in town, many of which had a straggler or two watching the game on big-screen televisions in otherwise empty rooms — another reminder of how the pandemic has altered the nation’s familiar rhythms.

The Great Lakes states are in the grip of a synchronized spiraling of the pandemic. Seven states that border the lakes, including Wisconsin, are at or near their all-time-worst daily case totals. And along with 16 other states, Wisconsin has added more cases over the last seven days than in any other weeklong stretch.

More than 41,000 people are currently hospitalized with the coronavirus in the United States, a 40 percent rise in the past month. Daily death tolls have not risen so sharply, but they are inching upward: the country is now averaging more than 800 deaths a day for the first time since mid-September.

Wisconsin, and the Green Bay area in particular, has seen some of the country’s most alarming data in recent weeks. Brown County, which includes Green Bay, has averaged more than 230 cases a day over the last week, up from about 50 a day at the start of September and around 10 in early June.

So even something as baked in to the local culture as a Sunday in Green Bay when the Packers are playing has been affected.

Eric Genrich, the mayor of Green Bay, said that coronavirus has drastically changed the way that people traditionally spend game day: “The visual when you’re driving through that area of town and not seeing those thousands of people all over the place, tailgating and having a good time — that’s an adjustment, for sure.”

He cited both the health fears and the risks to business.

“I think everybody’s really concerned about what the next few weeks are going to look like,” he said.

Most people in town are being “pretty responsible,” the mayor said and were more likely to get together in homes to watch the game than in public spaces. . 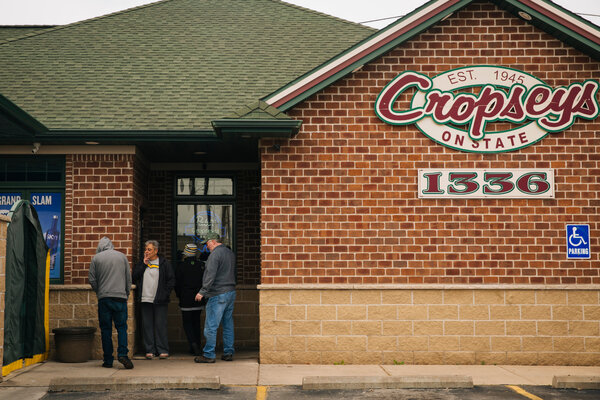 Still, in his own home, Mr. Genrich said he has been watching the games this season on TV with just his wife and two children. Last year, he said, he was often at the stadium for games, but now “we’re just sticking with one another and cheering from home.”

Kevin Ramirez visited the stadium on Sunday, though the team was playing an away game. A Florida native who attended college nearby in Manitowoc, Mr. Ramirez was back in town for a wedding.

“There’s nothing like a Packers Sunday, and just seeing the streets filled with Packers fans,” said Mr. Ramirez, 27. But on this Sunday, he said, Green Bay seems like a “ghost town” compared to how it looked when he was in school, when the parking lot would be packed with tailgating college students and residents.

Mr. Ramirez said that he had been to Cropsey’s on State, and that he still usually gathers with friends to watch Packers games, a habit he hasn’t changed much, though he no longer tailgates. “We aren’t too nervous going to a packed bar and just enjoying our Sunday of football,” he said. “There’s no other way to watch a Packers game.”

Others were less sanguine. Some were distressed at any sign of laxity about virus safety, game day or not.

“It’s really disheartening to see that a lot of people are not taking it as seriously,” said Emma Foster, a physician assistant who has been working with Covid-19 patients in Wisconsin. “Me and my co-workers, we’re completely overwhelmed by Covid right now.”

She was thrilled to drop by the stadium and take photos, but she said it was a good thing that the stadium was empty. “We’re really happy they’re not letting fans in here,” Ms. Foster said. “You can celebrate at home.”

Wisconsin continues to haggle over pandemic regulations and restrictions. On Friday, the Wisconsin Supreme Court blocked Gov. Tony Evers’ emergency order restricting the size of indoor gatherings, the latest twist in a long-running dispute that has pitted the Democratic governor against a Republican-controlled legislature.

The executive order, issued by Mr. Evers in early October, limited public gatherings to 25 percent of a building or room’s capacity, a step he said was needed to rein in the virus’s spread in the state. But bar owners and other business groups in Wisconsin have continuously attempted to block the order, claiming that they cannot make a living with the limits.

The powerful Tavern League, which sued the governor over the order, represents about 5,000 small businesses, according to Scott Stenger, who heads the league’s government affairs outreach. “We don’t take suing anybody lightly, let alone the governor of our state,” Mr. Stenger said last week. “It’s not something we’d do before.”

The issue is especially acute in rural areas, where restaurants and taverns often do not have official capacity limits. Under the executive order, such businesses would be limited to 10 patrons at a time.

On Sunday in Green Bay, though, the problem was a lack of demand rather than restrictive rules.

At Stadium View Bar, Grill & Banquet, people used to pack in shoulder to shoulder and spilling out into the streets on game days. Even cold weather could not deter locals from tailgating.

Now, the bar has taken out many of its tables, and while people still come in to watch the games, it is noticeably quieter.

“It feels sad,” said Amber Wrona, the banquet manager. “Whether you like the Packers or not, Green Bay is a football town. It’s what makes Green Bay go ’round, and it just feels a lot different around here.”

Ms. Wrona said delivery and takeout orders do increase significantly on game days, and that grocery stores are still full of fans buying food for watching parties at home. Sunday felt even calmer than usual this week, she said, perhaps because of the high infection rates in town.

At Cropsey’s on State, Carol Gezella, who used to own the place — her son does now — said she feels “pretty safe” despite the virus spike, but that she was worried about the governor’s orders.

“We’re going to do whatever we can to stay open,” she said.

Though rural areas and small metropolitan regions have seen some of the worst outbreaks in recent weeks, many large cities are now struggling as well. The counties that include Chicago, Oklahoma City, Minneapolis, Anchorage and El Paso all set single-day records on Saturday. Gov. Greg Abbott of Texas asked federal officials to open an Army medical center at Fort Bliss to civilian patients to help ease the strain on El Paso’s hospitals.

And, whether in big cities or small towns, health experts warn that the country is heading into the worst surge in cases yet.

Dr. Scott Gottlieb, a former F.D.A. commissioner, said in a Sunday appearance on the CBS program “Face the Nation” that the United States is at a “dangerous tipping point.”

Still, some Packers fans found hope in their team’s legacy.

Tom Wartick is a lifelong Packers fan whose daughter got married on the field. On Sunday, he was taking pictures along Lombardi Avenue, named after Vince Lombardi, the legendary Packers coach whose statue stands outside Lambeau Stadium. Mr. Wartick said he felt a true fan’s sense of uplift.

“Vince Lombardi said it’s OK to get knocked down — it’s not OK to stay down,” said Mr. Wartick, 63. “And it’s the same thing with this Covid virus. It’s a little intimidating, but we’ve got to keep moving forward with life.”