UFC fighter Jon Jones confronted a group of masked men after taking to the streets to “protect” his city, amid violent scenes across the US following the death of George Floyd.

Widespread protests all over the country were triggered when Mr Floyd, 46, died in Minneapolis after a white police officer was filmed kneeling on his neck for at least eight minutes.

While the majority of demonstrations have been peaceful, reports and images of looting and attacks on buildings have emerged in some cities, with intense anger over historic and continuing injustice faced by black Americans. 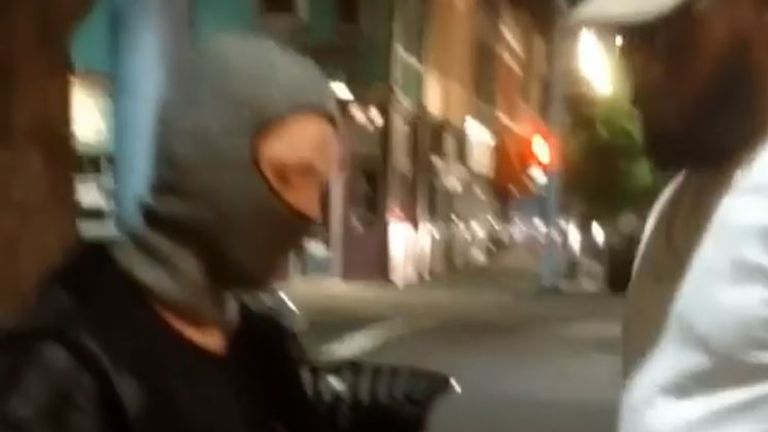 UFC star Jones, considered one of the best mixed martial arts (MMA) fighters in history, posted video online of him taking a group of young men to task as he walked the streets of Albuquerque, New Mexico.

Jones, who said on Sunday he was giving up the light-heavyweight title has has held since 2018, can be heard in the footage repeatedly demanding the men give him the “spray cans” they are carrying.

After one has handed over his can, another can be heard pleading his innocence to the MMA legend.

“Hey look I didn’t do nothing,” he says, before also handing over his can.

A voice off-camera can be heard saying: “It’s not the way, man.”

A message posted by Jones on Instagram alongside the video said: “Is this s*** even about George Floyd anymore?!?

“Why the f*** are you punk ass teenagers destroying our cities!?? As a young black man trust me I’m frustrated as well but this is not the way, we are starting to make a bad situation worse.

“If you really got love for your city (505), protect your s***. All you old heads need to speak up, call your young family members and tell them to come home tonight.”

John Boyega, Beyonce and Rihanna are among the famous faces who have showed more support for the protests, which have not been well received by President Donald Trump.

US media reports say that in a call to state governors on Monday, he told them they must “dominate” and “put people in jail for 10 years”.