A group of police officers in Los Angeles are under investigation after an offensive image was allegedly passed around.

The photo of George Floyd reportedly had the words “you take my breath away” in a Valentine-like format and it has been criticised by Mr Floyd’s family, the district attorney and the police union.

Mr Floyd was a black man who died in May last year after a police officer in Minneapolis pressed a knee on his neck for several minutes.

As he died, Mr Floyd was repeatedly saying: “I can’t breathe.”

His death prompted massive protests across the US and around the world calling for an end to racial injustice and police brutality.

Los Angeles Police Chief Michel Moore said that the internal investigation was looking into how the image came into the department and who was involved.

Mr Moore told the Los Angeles Times: “Our investigation is to determine the accuracy of the allegations while also reinforcing our zero tolerance for anything with racist views.”

He added that if the internal investigation confirmed the involvement of his officers, “people will find my wrath”. 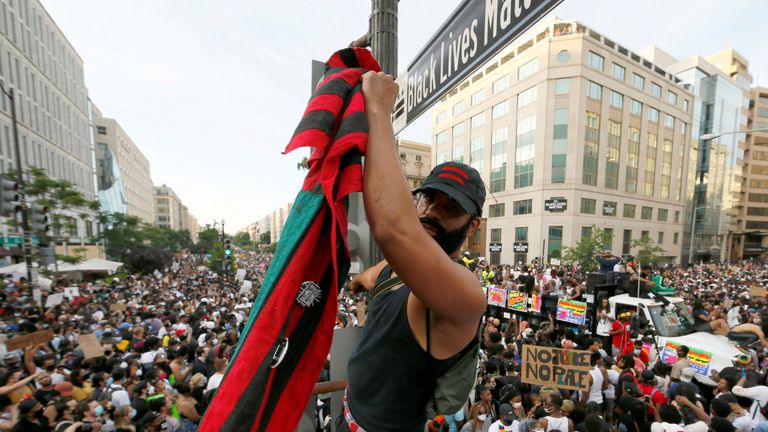 Mr Floyd’s family was furious about the photo and their lawyer Ben Crump said those involved should be “held accountable for their revolting behaviour…and an apology (should) be issued to the family immediately”.

“This is beyond insult on top of injury – it’s injury on top of death.

“The type of callousness and cruelty within a person’s soul needed to do something like this evades comprehension – and is indicative of a much larger problem within the culture of the LAPD,” he added.

Los Angeles County District Attorney George Gascon vowed to investigate the matter to see if any of his cases “may have been compromised by biased police work”.

The board of directors for the Los Angeles Police Protective League said the image was “abhorrent” and any officer involved in its creation or circulation “should quickly rethink their career choice because they clearly don’t have the judgement, nor temperament, to be a member of law enforcement”.