ATLANTA — Georgia lawmakers on Wednesday approved a bill gutting a Civil War-era law that allowed residents to arrest one another, a move championed by critics who said such laws have historically been used by white citizens to justify the killing of African-Americans.

The near unanimous support for the bill in both chambers of the State Legislature marks an important moment for Georgia, whose Republican governor, Brian Kemp, fully supported the bill and is almost certain to sign it into law, as he did last June with new hate crimes legislation. Both measures were inspired by the killing last year of Ahmaud Arbery, a Black man who was chased and then gunned down by three white men in a coastal Georgia neighborhood.

But the changes to the citizen’s arrest law, a version of which dates to 1863 and has been seen by many as a relic of the Old South and Wild West eras, also comes just days after Georgia Republicans passed a sweeping measure to restrict voting access that Democrats and voting rights groups said unfairly targets voters of color.

Republican support to invalidate much of the citizen’s arrest law demonstrates a party keenly interested in combating charges of racism. Mr. Kemp is likely to face off in an electoral rematch next year against Stacey Abrams, the former State House minority leader and a leading critic of restrictive Republican-backed voting laws.

Now, Mr. Kemp will be able to cite his support of the hate crimes law and changes to the citizen’s arrest law as he seeks to appeal to the small but important tranche of Black Georgia voters who may be open to conservative ideas about gun rights, school choice and low taxes. It could also help him court moderate white voters who have become estranged from his party.

“If that voter believes that the Republican Party is taking racist stands,” said Charles Bullock, a political scientist at the University of Georgia, “they’re not about to vote for a Republican.”

Critics of the citizen’s arrest law said it had long been used to perpetuate an atmosphere in which hundreds of Black Georgians were extrajudicially detained — and oftentimes killed — at the hands of white people. Between 1882 and 1968, 531 lynchings occurred in the state, according to the N.A.A.C.P., ranking Georgia second behind Mississippi.

“When lynch mobs would execute someone without due process, they would often claim they were exercising their right of citizen’s arrest,” said Timothy Floyd, a professor at Mercer University School of Law in Macon, Ga. In many cases, these mobs were not even complying with the law as written, Mr. Floyd said, “but it was used as a justification.” 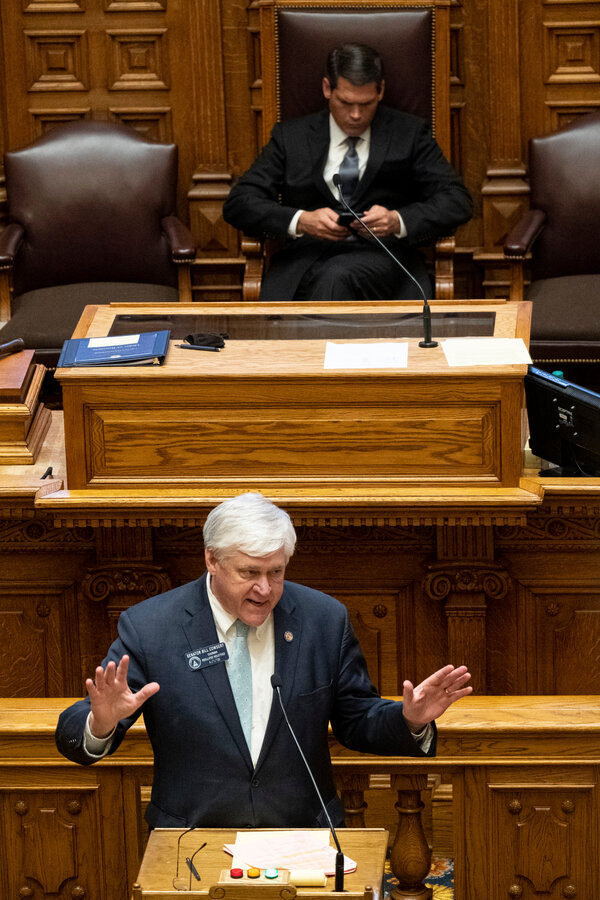 “It is an important and necessary step,” Bryan Stevenson, executive director of the Equal Justice Initiative in Montgomery, Ala., said of the law’s overhaul. “The notion that citizens — and we should understand that these laws were largely written for white citizens — have to be partners in maintaining control over Black people dates back to slavery.”

The bill that passed on Wednesday repeals the portion of the law that allows a private person to arrest someone if that person witnessed — or was told about — a crime, or if someone suspected of committing a felony is trying to escape. The bill carves out some exceptions for business owners, who can detain people on “reasonable grounds” if they are suspected of shoplifting or other thefts. Other exceptions apply to licensed private detectives and security guards.

The revision of the law puts Georgia on the vanguard of a broader effort to reconsider the very notion of a citizen’s arrest — a fraught and contentious act that is allowed in every state, either by common law or statute. Ira R. Robbins, a law professor at American University, has called it “a doctrine whose time should have passed many decades — or centuries — ago,” arguing that it is often unclear whether a person has the legal authority to make an arrest.

Armed vigilante groups patrolling the Southwest have generated controversy in recent years by carrying out citizen’s arrests of people believed to have illegally crossed the Mexican border. But it was Mr. Arbery’s killing in February 2020 that prompted what may prove to be the most significant examination of an American citizen’s arrest law in years.

In a divided state in which lawmakers from opposing parties rarely agree, the reform in Georgia was supported by both Democrats and Republicans. The latter, including Mr. Kemp, have been frank about their shock and revulsion over Mr. Arbery’s killing, and said it was their reason for supporting the bill. Mr. Arbery’s slaying was captured in a graphic video that showed the 25-year-old trying to avoid pursuers, who suspected him of a string of property crimes in their neighborhood, as they chased him in two pickup trucks.

“This was a real tragedy, and all of us understand that,” said State Representative Don Hogan, a Republican from Glynn County, where Mr. Arbery was killed, and a co-sponsor of the reform bill, a version of which passed the State House unanimously in early March with 173 votes. “This is something that should have never happened. I’m not sure what these three guys were thinking when they chased Ahmaud down.”

But Republican support for the bill also reflects some of the more subtle political forces at work in a hotly contested Southern state where Black voters tend to cast ballots for Democrats and white voters tend to support Republican candidates.

Brian Robinson, a political strategist based in Georgia, recalls his Twitter feed filling up with outraged comments from fellow Republicans after the video of the shooting went viral. What people saw in the video, he said, was not like cases of high-profile police shootings “where some people see a murder and some people see a police officer acting appropriately in a charged situation, or acting within reason.”

“I think all of us could imagine the terror of running down the street and seeing some guy jump out at you with a gun,” he added. “I think it hit on a human level, not just Black people or white people, necessarily.”

Mr. Kemp was among the Republicans to denounce the killing, a notable position from an elected leader who in one 2018 campaign ad pointed a shotgun at a teenager hoping to date his daughter, and in another ad suggested that he might take vigilante action by using his pickup truck to “round up criminal illegals.”

After pushing hard for the hate crimes law, Mr. Kemp followed up by spearheading the effort to pass the citizen’s arrest reform. Mr. Arbery, he has said, “was the victim of a vigilante style of violence that has no place in our state, and some tried to justify the actions of his killers by claiming they had the protection of an antiquated law that is ripe for abuse.”

Mr. Kemp is facing a monumentally complex task as he looks toward re-election next year. Former President Donald J. Trump, who gave Mr. Kemp a big boost with an endorsement in a primary runoff in 2018, later soured on the governor, saying he was “ashamed” of the endorsement after Mr. Kemp refused Mr. Trump’s entreaties that he overturn the results of November’s presidential election in Georgia.

Mr. Trump, who lost the state by about 12,000 votes, has encouraged a primary challenge against Mr. Kemp.

Mr. Kemp narrowly defeated Ms. Abrams in the 2018 general election. But her stature has only grown as she helped orchestrate the recent Georgia victories of President Biden and Senators Jon Ossoff and Raphael Warnock. More recently, Ms. Abrams, who is Black, has been one of the most prominent critics of the restrictive voting law, calling it “nothing less than Jim Crow 2.0.”

Mr. Kemp, who is white, is not likely to win anything close to a majority of African-American voters. But like previous Republican governors in Georgia, he knows it will be important to keep some percentage of Black voters in the fold. In 2014, Gov. Nathan Deal waged a successful bid for re-election with targeted messaging to Black voters that emphasized his work on criminal justice reform. He ended up with 10 percent of the Black vote, Mr. Bullock said.

Mr. Kemp fared slightly worse among Black voters in 2018, but he was able to attract a consequential number of Black male voters. He will most likely seek to build on that success in 2022, with a platform that combines a business-friendly, pro-gun stance and the reforms he sought after Mr. Arbery’s slaying.

Mr. Bullock said the reforms might not only help Mr. Kemp seek out Black voters, but also white voters in the Atlanta suburbs who have shifted their allegiance and votes in the Trump era.

Christopher Bruce, the political director for the A.C.L.U. of Georgia, praised Mr. Kemp for building consensus on the citizen’s arrest issue. “I think everyone came together and said this has gone way too far, and the rallying cry was that nothing like this should ever happen again in the state of Georgia,” Mr. Bruce said.

An early prosecutor assigned to the Arbery case cited Georgia’s citizen’s arrest law in arguing to the local authorities that the white men who chased him — William Bryan, Gregory McMichael and his son Travis McMichael — should not be arrested. The younger Mr. McMichael fatally shot Mr. Arbery three times with a shotgun. Several weeks later, after the case received national attention and outrage over the killing grew, the men were arrested and indicted on murder, false imprisonment and other charges.

Lawyers for Travis McMichael have said they expected that the citizen’s arrest law, as it existed on the day of the shooting, would be central to the defense of their client when the case eventually goes to trial. Still, Mr. Arbery’s family said they were heartened by the reforms to the law.

“I’m trying to be real with you — a white man always has an excuse to kill a Black man,” Marcus Arbery, Mr. Arbery’s 57-year-old father, said in a recent interview. “They’re always trying to justify so they can get away with it. They’ve been doing that for 400 years. So that’s just got to stop.”