A handbook Ghislaine Maxwell gave to staff working at Jeffrey Epstein’s house in Palm Beach – in which they were told to “see nothing, hear nothing, say nothing” – has been made public in court documents.

Its 58 pages contain advice on anticipating the “needs of Mr Epstein” and the requirement to be “unobtrusive” – something described as “key”.

Staff were told to “NEVER disclose Mr Epstein or Ms Maxwell’s activities or whereabouts to anyone” and “advise Ms Maxwell of any strange telephone calls or enquiries”. 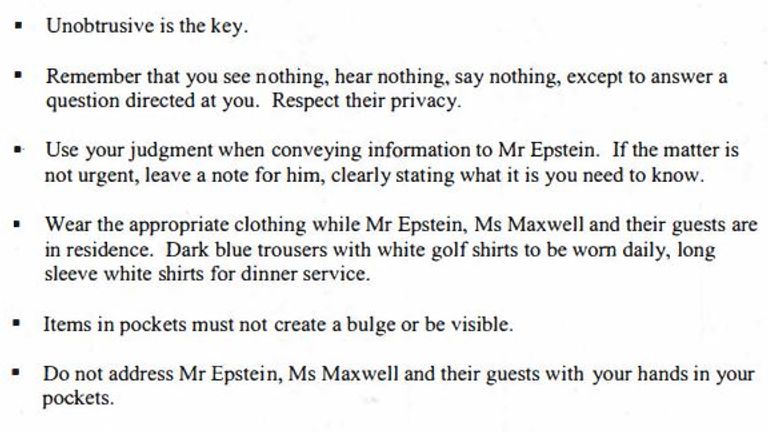 Split into sections, there are instructions on “guest relations”, “proper language”, and “answering the telephone”, among others.

Those working at the property were told to “wear the appropriate clothing while Mr Epstein, Ms Maxwell and their guests are in residence”.

These were “dark blue trousers with white golf shirts to be worn daily, long sleeve white shirts for dinner service”.

Items in pockets “must not create a bulge or be visible”, it added.

Staff were told not to address either Maxwell or Epstein with their hands in their pockets, or while chewing gum.

Strong perfumes or aftershaves were disallowed because they might “cause an allergic reaction”. Staff were instructed to “SMILE!”

Words or phrases that were forbidden included “yeah”, “you bet”, “gotcha” and “I dunno”.

Two of the approved comments were “it is no trouble at all” and “I have no idea, but I will find out immediately”.

Phone calls had to be “answered in three rings or less”.

In a section on the master bedroom, staff were told to set the air conditioning to 60 degrees, make sure the TV remote controls were working, and: “Gun placed in beside table drawer.”

Tubes of toothpaste had to be “more than half full” and toilet paper was “white two-ply” only. 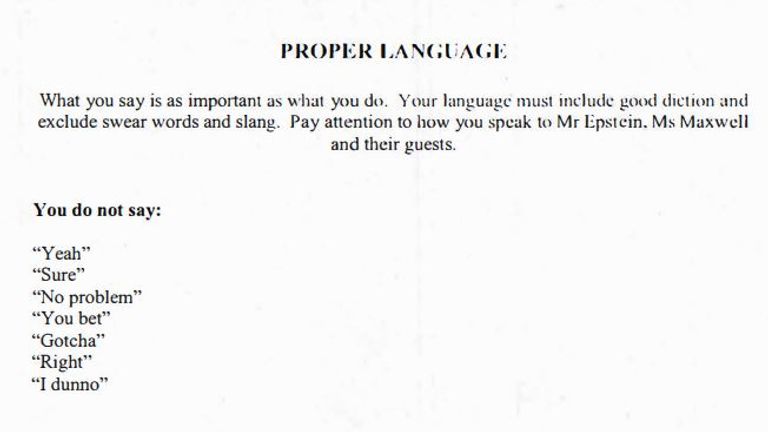 Regarding stationary, there had to be “three sizes of Jeffrey Epstein notepads” and “two sizes of Ghislaine Maxwell and Lady Ghislaine notepads”.

Vehicles had to be three-quarters full of petrol with “$100 in glove compartment or centre console”.

In addition, “any CDs lying around should be placed back in the correct covers”.

Many of the pages had to be individually signed and dated.

Ghislaine Maxwell is on trial in New York, accused of crimes including luring girls as young as 14 to be sexually abused by Epstein at his properties in New York City, Florida and New Mexico, as well as her own London residence, between 1994 and 1997.

Maxwell denies the charges against her, with her defence team suggesting she has been used as a “scapegoat” for Epstein’s crimes.