His president and No. 1 client, Donald J. Trump, is no longer in office. His claims of election fraud, unfounded and disproved, were dismissed in courts across the country. He may still face criminal charges, and now there is a move to disbar him in New York.

But Rudolph W. Giuliani still has a voice, amplified by a 50,000-watt radio station nestled in Midtown Manhattan. And there, Mr. Giuliani is his usual, unrestrained self.

“He won that election,” Mr. Giuliani said last week on his radio show on WABC-AM (770). “You give me one hour. I will prove it to you with pictures, documents, votes and people we can call on the phone in five states.”

And the people who want him disbarred?

“Idiots,” “malicious left-wingers” and “irresponsible political hacks,” he said on his show on Thursday. “You want to disbar me? I think I’m going to move to disbar you.”

In the heart of New York City, long a Democratic stronghold, WABC has become an established beacon for right-wing views.

Wonder what happened to Bill O’Reilly after he was ousted from Fox News? He hosts a one-hour show for WABC, after Mark Levin, the syndicated conservative commentator who has a three-hour show at night.

The Fox News host Brian Kilmeade has a two-hour show in the mornings. Bernard Kerik, the former police commissioner, and Jeanine Pirro, the Fox News host, have one-hour weekend shows.

WABC’s identity as a conservative guidepost may come as a surprise to those more familiar with its history as a pioneering Top 40 station: In the late 1960s and early 1970s, WABC had more than six million listeners, the most in the history of American radio at that time.

But in 1982, when most music stations had moved to the FM dial, WABC dropped music from its programming and went to an all-talk format on May 10, a date that some longtime fans and radio industry veterans refer to as the day the music died.

The station has had a mix of conservative and liberal hosts over the years, but its hard shift to the right was solidified by the time it was purchased in 2019 for $12.5 million by John Catsimatidis, a billionaire who has run for mayor of New York City as a Republican.

“You know why I bought it? I’m having fun,” Mr. Catsimatidis said in an interview. “I’m enjoying trying to make it No. 1 again.” 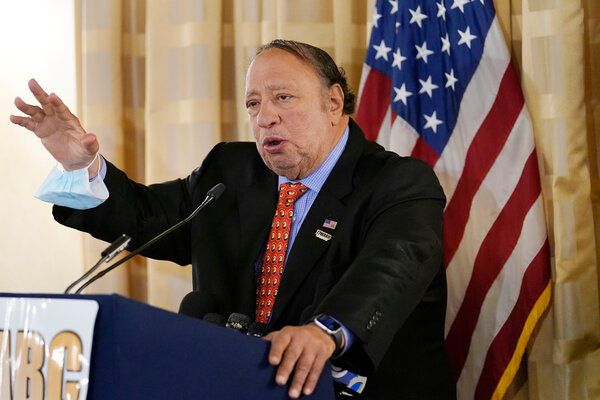 Mr. Catsimatidis said he is considering running for mayor this year but as a Democrat. He raised money for Bill and Hillary Clinton before funding local Republicans and voting for Mr. Trump. His daughter, Andrea, is chairwoman of the Republican County Committee in Manhattan.

The station dropped the three-hour show hosted by Ben Shapiro, the right-wing commentator. It also hired Bruce Murrow, known as Cousin Brucie, the octogenarian disc jockey who was a staple during WABC’s glory years. Mr. Catsimatidis also brought music programming back to the station on weekend nights.

But news remains the beating heart of the station. And for several hours each day, listeners can hear hosts, guests and callers float a range of beliefs, with or (mostly) without evidence.

Among the recent ones heard on the station this month: The Chinese and Iranians funded the stealing of the presidential election. William P. Barr did not investigate the fraud when he was attorney general because he was blackmailed. Antifascist activists, not supporters of Mr. Trump, were responsible for the deadly riot at the U.S. Capitol two weeks ago.

Like other stations, WABC runs disclaimers saying the views heard on air “do not necessarily reflect the policies or positions,” of the company. But the attack at the Capitol seems to have been a turning point.

About a week after the Capitol riot, WABC management directed its on-air talent “to not state, suggest or imply that the election results are not valid or that the election is not over,” adding, “If this policy is violated, employees will be subject to immediate discipline, up to and including termination.”

The memo, which Mr. Catsimatidis shared with The New York Times, says the company is “committed to uniting the nation during this unprecedented and tumultuous time.”

Cumulus Media, a giant talk radio company that once owned WABC, distributed a similar memo to its staff days earlier.

But casual listeners of the station can be forgiven if they have not noticed the effects of the policy.

When a caller, David from Brooklyn, said on Jan. 14 that he wanted the election ballots to be examined “forensically,” so that we can “make sure there was no fraud and then the whole country can heal,” a host, Lidia Curanaj, replied: “You’re right. That would be amazing.”

She referred to “voter dumps” and “statisticians” who said it was “statistically impossible for what happened.”

“The left just wants us to believe, to sit around and be like accept everything and shove it down our throats,” she said. “And we were just questioning things. That’s what we do as Americans.” Ms. Curanaj did not respond to an email seeking comment.

Mr. Giuliani, a two-term mayor of New York City, regularly tells listeners of his one-hour show — at 3 p.m. weekdays and 10 a.m. on Sundays — that he has “proof” of fraud in the presidential election.

On Tuesday, when a caller to Mr. Giuliani’s show referred to the stolen election, he replied, “You know, if I say that they may take me off the air.”

Later, in a text message, Mr. Giuliani said the “off the air” remark referred to his podcast, some of whose episodes have been taken down by YouTube and other platforms.

When asked about the station’s memo, Mr. Giuliani said that he “was unaware” of it. He added: “That memo does not refer to discussing evidence. I will continue to do so based on my knowledge of the truth and my guaranteed sacred right of free speech.”

It seems as if Mr. Giuliani’s impudence will go unpunished by Mr. Catsimatidis.

“You know what talk shows is? The theater of the mind,” Mr. Catsimatidis said. Later, he added, “I want more people to listen — people don’t want to listen to boring people.”

When asked about the legitimacy of the presidential election, Mr. Catsimatidis offered a showman’s enticement. “I don’t know what the truth is,” he said, before offering a version of what he has told WABC listeners: “This is going to go down as who killed John Kennedy. OK? That’s my satire. That’s my joke, because 58 years later nobody’s really sure who really killed John Kennedy. Right?”