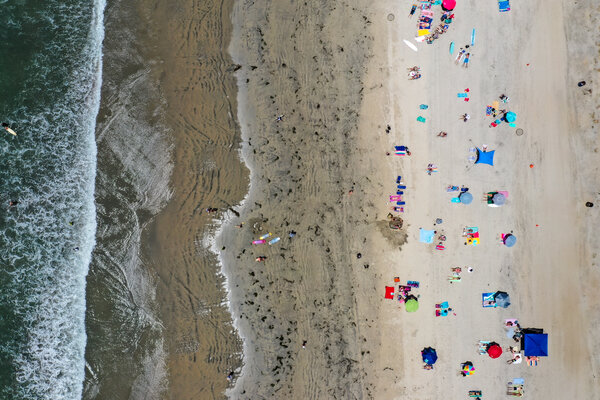 This weekend, antsy Californians are projected to hit the road in record numbers for a newly unfettered Fourth of July holiday. And, as usual, many of us are headed for the coast.

Last year around this time, our relationship with the beach was a little complicated. Amid an uptick in coronavirus cases, Gov. Gavin Newsom had implored us to avoid places, including many of the state’s most popular Independence Day destinations, where there were likely to be crowds. Beaches had been closed for that reason earlier in the year.

But as the months marched on it became clear that California’s beaches were some of the state’s most important respites — from oppressive, dangerous heat inland, from the monotony of our homes. Many beaches were soon reopened, with restrictions in some places.

This underscored the urgency of keeping the state’s waterways clean, said Shelley Luce, the president and chief executive of the environmental advocacy group Heal the Bay.

“We’ve always been dependent on our beaches as open space, as a place to relax,” she recently told me. “In 2020, they were open and available, and people were seeking out that connection to nature.”

Heal the Bay this week released its 31st annual Beach Report Card and its third River Report Card. The grades aim to help Californians better understand the water quality in the places where they may be swimming. The report assigns A through F letter grades based on bacterial pollution levels to some 500 beaches, almost all in California, and 28 freshwater recreation sites in Los Angeles County.

The findings paint a mixed picture of our drought-wracked summer. While the vast majority of beaches had excellent water quality in summer 2020, it was most likely because there was no rain to wash pollution into the sea.

“The first rain washes so much pollution in, and in what used to be our normal weather pattern, each one was less polluting than the last one,” Luce said. “Now there’s weeks or months before the next flush, so pollution builds up again.”

In other words, we’re facing more extreme fluctuations in water quality, which could then tip into dangerous levels of pollution more often.

“We have to pay a lot of attention to our wet weather runoff,” Luce said.

And, she said, the drought was likely to result in frequent and severe wildfires, which can lead to ash that pollutes nearby water for months afterward.

Still, it’s not all dire news. Luce said that during Heal the Bay’s three decades of putting out the report card, leaders have taken steps to mitigate pollution, like diverting storm drains away from beaches. In places like Los Angeles County, they’ve started longer-term projects aimed at restoring wetlands and green space so that storm water doesn’t flow straight from urban areas into the ocean.

Heal the Bay also added grades for beaches in Tijuana this year, she said, in hopes of drawing attention to pollution there.

So which beaches deserve extra attention? And where should you be careful about getting in the water?

Here are this year’s 10 Beach Bummers:

3. Capitola Beach, west of the jetty in Santa Cruz County

Read more about the 2019 report card.

The state’s lieutenant governor announced on Thursday that she had set Sept. 14 as the date for the special election to determine whether Gov. Gavin Newsom should become the state’s second governor to be recalled from office.

The U.S. Supreme Court ruled that California may not require charities soliciting contributions in the state to report the identities of their major donors.

The governor rolled back a more ambitious wildfire prevention plan, along with more than half a billion dollars in fuel reduction promises, CapRadio and NPR report.

The San Francisco Chronicle examined the major fires burning in the state.

Almost five out of every six coronavirus cases went undetected in the first months of the pandemic, The Los Angeles Times reports.

A California couple who mowed down 36 protected Joshua trees to clear their land for a new house have been fined $18,000.

Seventeen people, including 10 law enforcement officers, were wounded on Wednesday when part of a cache of improvised explosives blew up in South Los Angeles during what was supposed to be a controlled detonation by a police bomb squad.

Homicides in California jumped by 31 percent last year, making it the worst year for homicides since 2007, The Associated Press reports.

A new report found that reports of hate crimes against Asian Americans rose by 107 percent in 2020, The Sacramento Bee reports.

More than 200 prominent women from around the world wrote an open letter urging Facebook, Twitter, TikTok and Google to “prioritize the safety of women” on their platforms.

President Biden wants to use pollution rules to rapidly lift electric car sales, but there are hurdles ahead.

The wealth management firm that was set to take over as the co-conservator of Britney Spears’s estate, alongside her father, has requested to resign from the arrangement, citing Spears’s public criticisms of the conservatorship.

Facebook, Microsoft and Amazon are ramping up offerings for cloud gaming that let people enjoy high-quality games on any device.

A grass-roots organization in Los Angeles’s Chinatown said some new arrivals to the neighborhood were virtue signaling on Instagram about social justice issues but not addressing inequalities at home, LA Eater reports.

The Monterey Car Week auctions in California, among the most important of the year to collectors, will return on Aug. 12-14.

California Today will be off on Monday for the Fourth of July holiday. Have a great weekend, and stay safe.