Citizens’ groups have challenged it and privacy advocates have wrung their hands, asking whether Toronto was taking its embrace of technology too far by allowing a sibling company of Google to help remake a rundown part of its waterfront.

But specifics have been incomplete about the project in the year and half since the company was asked to reshape Canada’s largest city, relying on a vast range of data collection including sensors to measure things like park bench use and toilet bowl flushes, and with features like robots to drop off parcels and pick up trash.

On Monday, that will change when a government agency releases the first detailed plan for the project, which is being run by Sidewalk Labs, a subsidiary of Google’s parent, Alphabet.

It will also confirm whether Sidewalk has, as it claims, adjusted its thinking for the project based on suggestions and criticisms at public sessions about the entire concept.

The development plan is unusual both in its size and scale.

Ultimately it may involve upward of 800 acres of a former port immediately to the east of downtown that was largely developed in the 1950s in the largely unfulfilled expectation that the St. Lawrence Seaway would make Toronto a major shipping center.

The plan envisions automatic awnings to shield passers-by from rain or the summer’s sun, and vehicles that mostly drive themselves. Traffic lights will be optimized for cyclists and pedestrians traveling on paths, and sidewalks will automatically melt snow.

The vision also includes a rejection of traditional zoning to mix apartments and businesses in the same buildings, ones made largely from wood and built to unusually high environmental standards.

To its supporters, Quayside, as the project is known, promises to advance both urban design and Canada’s tech community, much of which is now based between Toronto and the twin cities of Kitchener and Waterloo to its west.

But at a time when distrust of large technology companies is growing, Sidewalk’s critics have characterized the plan as one in which Google will use its vast financial resources to expand its surveillance powers over people’s online lives into the physical world, raising questions of privacy and loss of democratic control.

“I was really excited about the project, and I still believe in the vision of a tech-first community,” said Milan Gokhale, a technology worker and organizer of #BlockSidewalk, one of several groups opposing the plan. “We just don’t need Google to do it.”

After Sidewalk Labs, which was founded four years ago, was selected by the three governments to come up with a detailed plan for a prototype project on 12 acres of the land, Daniel L. Doctoroff, its head who is a former New York City deputy mayor and former chief executive of Bloomberg, has become a regular visitor to Toronto. 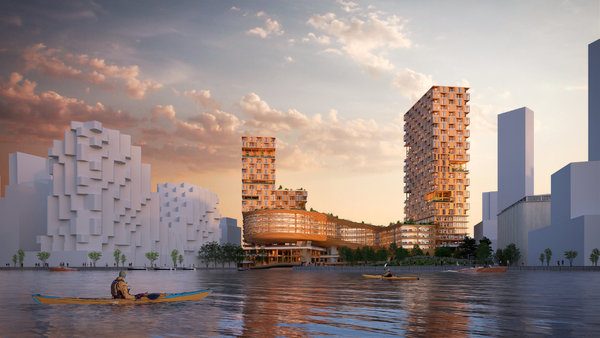 Fully aware that many of its ideas would not be immediately embraced, the company has been in the public consultation business as much as it’s been an urban developer. By Mr. Doctoroff’s count, Sidewalk has heard from 21,000 people over the last year and a half as it developed the plan that Waterfront Toronto will make public on Monday.

“When you propose things that are new or different, you know, there’s a lot of questions about them,” Mr. Doctoroff said. “I probably found it a little bit surprising before we announced our plan that people were kind of going to presume that we were going to act somehow in bad faith when what we said was, we are going to listen to people, understand what their concerns were.”

Prime Minister Justin Trudeau was in Toronto to announce the decision to ask Sidewalk for a plan in 2017, and spoke glowingly of its potential. The proposal has also been vigorously championed by, among others, the Toronto Board of Trade, a business group.

But some of its critics have been equally high-profile, and they are far from Luddites. Chief among them has been Jim Balsillie, who was co-chairman and co-chief executive of the company now called BlackBerry when it effectively introduced the first successful smartphone.

“I am keen to see the end of this faux consultation charade, an ugly 18-month, psychological public relations game that has become the defining feature of this project,” Mr. Balsillie wrote in an email.

“Google has deliberately weaponized ambiguity, subverted democratic process, obfuscated key elements of concern such as data governance and revealed information to the public only when smoked out by aggressive criticism or through a media leak,” he wrote.

In a bid to stem that sort of criticism, Sidewalk released a proposed data privacy plan late last year.

It said that all of the data produced by sensors in the project, like those that will count the number of times each toilet is flushed, would go to an independent body that the Board of Trade, separately, has suggested should be Toronto’s library system.

Google will not have priority access to the data, which will be open to everyone. Before any information is collected or analyzed, anyone wanting to use it will have to tell the independent data body why it is needed and detail privacy protections.

“Once we did release the plan, the vast majority of people understood how surprising and different it is, particularly compared to the kind of wild West that exists with urban data today,” Mr. Doctoroff said. “I did find it kind of humorous at the end of the day that the attention then shifted to: Who are we to propose that?”

But for many critics, particularly Mr. Balsillie, why Google should reshape a large section of Toronto and do so by using data by citizens going about their everyday lives is the fundamental question surrounding the plan.

Noting that the project involves “one of most valuable pieces of land in North America,” Mr. Balsillie asked why the government’s property should be turned over a company with no significant record in development, “especially when Toronto currently headquarters world-class real estate development and smart city technology industries.”

“The public will also need to see full protection of Canada’s democracy, economy, sovereignty and digital rights and be convinced that a foreign multinational in the business of mass surveillance is here to do just that,” he added.