It’s Wednesday. We’ll look at one of the largest office-space deals, not just in New York City but in the United States. 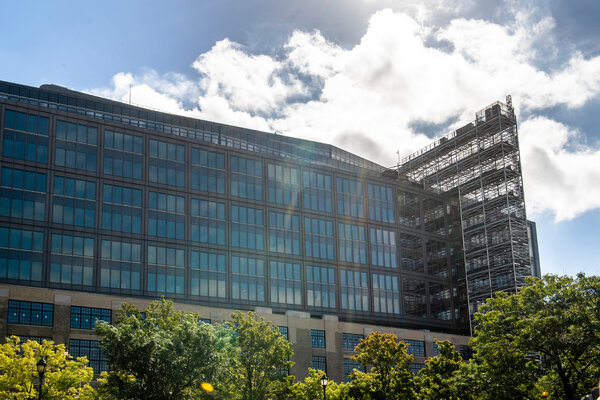 There was no question that it was a huge transaction: a $2.1 billion deal for office space in Manhattan. The question was whether it signaled a turning point for a city struggling to emerge from the pandemic or whether it was merely the latest move by a tech firm determined to enlarge its footprint in New York.

The deal, announced on Tuesday, involves a sprawling former railroad freight terminal near the Holland Tunnel. The buyer, Google, already has 12,000 corporate employees in New York but said it planned to hire 2,000 more in the next few years.

That pointed to the New York economy’s increasing reliance on the tech sector at a time of decidedly mixed forecasts for the city. How other industries adapt to a combination of remote and in-person work is likely to determine how the office market changes — and how those changes affect the city’s economy.

No other city has so much riding on the changing workplace as New York does. As my colleagues Matthew Haag and Nicole Hong point out, New York’s economic recovery could hinge on commercial real estate, and not just on the millions of dollars that tenants pay to rent office space. Before the pandemic, office buildings were a magnet for 1.6 million workers every day, from chief executives to custodians. The ripple effects of the money they spent on everything from morning coffee to quick lunches to impulse buys in nearby stores supported thousands of other businesses.

With office buildings empty as companies shifted to remote work in the pandemic, those businesses foundered. And many of the large tenants that once kept them going have slimmed down.

Major New York employers like JPMorgan Chase have relinquished thousands of square feet, contributing to a glut: Almost 19 percent of Manhattan office space is available for rent, according to the real estate services firm Newmark, a record that is nearly double the average rate over the last decade.

Even the Empire State Building, a city-within-a-city that was once a symbol of the urban way of working, is facing potential vacancies.

How much space companies that adapt to a hybrid work model will need is one of the major uncertainties facing the office market. “During the pandemic, people assumed an across-the-board reduction in activity and demand for office space, when actually it’s a much more complex equation,” said Tom Wright, the president of the Regional Plan Association, a research and advocacy group.

One variable in the equation could well be conference rooms. Companies will need them if they are scheduling meetings with some employees attending in person and some videoconferencing from home. Tech companies are perhaps best equipped to shift to such an arrangement. Facebook’s chief executive, Mark Zuckerberg, said several months ago that he planned to spend half of next year working outside the office.

Still, “We don’t know how remote work is going to play out,” said Jonathan Miller, the president of Miller Samuel, a real estate appraisal form. “In lockdown, the tether between work and home became infinitely longer, but it wasn’t the complete solution. It just gave more flexibility.”

Make sure to grab your rain jacket. There’s a chance of showers today that may continue the rest of the week. Expect temps in the 70s — high 70s during the day and mid-70s in the evening.

Isaabdul Karim, held at Rikers Island on a parole violation, was one day short of qualifying for release when Gov. Kathy Hochul freed 200 prisoners last week. He died there on Sunday.

More than 20 percent of the city’s hotels have been left empty by the pandemic. Eric Adams wants to convert them into “supportive housing.”

Tessa Majors, a Barnard College student, was stabbed to death in 2019. One of her killers pleaded guilty on Tuesday.

Basquiat and the bartender

A guy walks into a bar where he is a regular and gives the bartender a how-to book about cocktails.

That’s not the beginning of a joke. It’s about a coals-to-Newcastle moment from 35 years ago.

The guy wrote a dedication in the book: “For the best bartender in N.Y.” In the back, he did a few jagged drawings in pencil. The bartender wrapped the book in aluminum foil — “If it’s good for a sandwich, it’s good for artwork,” the bartender said — and stowed it away.

It might have been forgotten if the guy who slid the book across the bar had not been Jean-Michel Basquiat.

But someone who had heard about it years ago mentioned it the art adviser and dealer Janis Gardner Cecil. She persuaded the bartender, Randy Burns, to show the Basquiat drawings for the first time, in an online exhibition.

Burns appears under the name Randy Gun as a guitarist and singer. The online exhibition includes photographs of him performing in the 1970s and 1980s that were taken by Bobby Grossman, a neighbor when they lived in the Chelsea Hotel on West 23rd Street and Grossman was the photographer for the cult public-access cable show “TV Party.” Burns played in the band on the episode when the featured performer was Debbie Harry. By coincidence, Basquiat had sold his first painting to her in 1981.

Burns started as a bartender at the Great Jones Cafe a couple of years later, not long after it opened. He recognized Basquiat from the downtown scene and realized that Basquiat lived across the street. The bar opened at 4 p.m., but Burns began his workday at 3, setting up for the night.

That was when Basquiat would take his place at the bar and order a margarita.

“He was the only person I’d let in,” Burns said. “The door was locked. I let him in because I knew he wasn’t going to be asking ‘how do you make this’ or ‘what do you put in that.’” It was the mystic sweet communion of a quiet bar.

Basquiat nudged the book across the bar one day after he had been away for a while. “He didn’t say ‘Check this out’ or ‘I did this for you,’” Burns said. “It wasn’t until later, after he left, that I looked in the back and saw there were drawings.”

The book was “Harry’s ABC of Mixing Cocktails,” an updated edition of a classic by the longtime owner of Harry’s Bar in Paris. The New York Public Library has a copy. So do at least three university library systems.

Theirs do not have what Burns’s copy has — the Basquiats. On a page that was blank except for the heading “Note your own favourite cocktails” was a drawing built around the word “Eroica,” as in a Beethoven symphony. Burns figured Basquiat had merely misspelled the word “erotica.”

“At whatever age I was then,” he said, “I wasn’t thinking of retirement. I was just hoping I could live to the next day.”

New York Magazine interviewed five residents in East Elmhurst about what they lost in Hurricane Ida.

The Bushwick Starr needed a new space. So they moved to a former dairy plant, three L stops away.

My college roommate grew up in the suburbs in Massachusetts and moved to Texas shortly afterward. Years later, he came to visit me in New York for a weeklong stay.

I picked him up at the airport in Newark, and as we drove back to my apartment and caught up on each other’s lives, we talked about what we would do and where we would go during his stay.

It quickly became evident that the idea of relying on mass transit and walking for day-to-day tasks and activities was new to him.

As we pulled into my building’s garage, he asked whether he should leave his jacket in the car for later.

“You don’t understand,” I said. “We don’t see the car again until you go back to the airport.”

Glad we could get together here. See you tomorrow. — J.B.

P.S. Here’s today’s Mini Crossword and Spelling Bee. You can find all our puzzles here.