LOS ANGELES — If this were any other year, members of the Los Angeles Opera would have been singing Christmas carols this week in the wards of Martin Luther King Jr. Community Hospital, which serves the largely poor and Latino communities of South Los Angeles. Instead, a street choir from Skid Row stepped in with a video to bring holiday cheer to the growing number of dying coronavirus patients and traumatized staff.

Inside the hospital, so many patients are streaming in that gurneys have been placed in the gift shop, and the entire lobby is now a space to treat patients. The waiting room is a tent outside.

“Everything is backed up all the way to the street,” said Dr. Oscar Casillas, the medical director of the hospital’s emergency department, which is set up to serve about 30 people at a time but over the last week has seen more than 100 patients per day.

In the High Desert region northeast of Los Angeles, health care workers at one hospital are getting their first shots of a coronavirus vaccine in a cheerful conference room decked out in holiday decorations. There is Christmas music, and “Home Alone 2” playing on a screen. Yet as soon as the needle is out of their arms, there is the next “code blue,” or the next FaceTime goodbye to arrange between a dying patient and a grieving family.

“Every day is scary,” said Lisa Thompson, an intensive care nurse at the hospital, Providence St. Mary Medical Center in Apple Valley. “We’re all stressed before we even come to work. Tons and tons of patients. We can’t even keep up with the amount of patients coming into the hospital.”

In increasingly urgent tones this week, health officials and political leaders in Southern California have called on people to stay home for the holidays, desperately hoping to forestall another surge in infections, on top of the current crisis that came after Thanksgiving.

Barbara Ferrer, director of the Los Angeles County Department of Public Health, said the only way to “pay tribute to the fundamental spirit of the holidays” was to stay home.

But so far very little has slowed the spread of the virus. 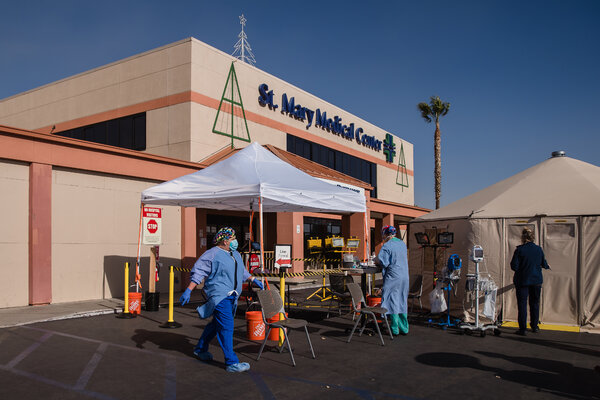 Each day in California, which this week became the first state to reach two million recorded virus cases, brings a mind-numbing new accounting of the tragedy underway — more cases, more sickness, more death. Southern California, the most populous area of the most populous state, is on the edge of catastrophe. In Los Angeles County, a vast region whose population is roughly the size of Michigan’s, there are roughly 6,500 people hospitalized with Covid-19, a fourfold increase over the last month. The number of patients in intensive care units is close to 1,300, double what it was a month ago.

And the county on Thursday reported 146 new deaths, according to a New York Times database, the equivalent of about one every 10 minutes and its highest total of the pandemic. Nearly every hospital has surged past its capacity, putting new beds in any space it can find, and preparing for the possibility it will have to ration care — essentially making wrenchingly difficult decisions about who dies and who lives.

But the availability of beds is not even the most urgent concern. With so many employees falling sick or taking leave after months of treating coronavirus patients, hospitals are struggling to find enough workers.

“In the beginning, especially, you saw all these pictures and videos from New York and you think, ‘Oh my God, it can never get that bad here,’” said Mendy Hickey, the quality director at St. Mary’s. “And while we have all the supplies we need, it is that bad here and we have no staff to take care of patients.

Ms. Hickey, a former nurse, has lately taken on shifts caring for patients in intensive care, on top of her administrative duties, sometimes working 23 hours in a day. She was planning to work late Christmas Eve, and hopes to spend at least Christmas morning with her three daughters before returning to the hospital.

As the holiday season has collided with the height of the pandemic in Southern California, there is little joy for the health care workers on the front lines, who are bracing for the near certainty that things will only get worse. California’s governor, Gavin Newsom, has projected that hospitalizations would reach close to 100,000 in January if residents do not lock down for the holidays. On Thursday, California reported 351 deaths.

“I can only imagine what is going to happen after Christmas and New Year’s if we don’t get the community educated on how to stay home and be safe,” said Ms. Thompson, the nurse at St. Mary’s.

Judging by what she sees in her community after another traumatizing day in the intensive care unit, she is not optimistic.

“We’re all talking about the middle of January for when we’re expecting to see a major surge from both holidays,” she said. “It’s kind of scary.”

California was the first state to impose a lockdown in the spring, and for a while seemed to be managing the pandemic much better then other places. But as it faces the crisis it has long feared, the pain is being spread unevenly.

In South Los Angeles, where Martin Luther King Jr. Community Hospital serves low-income communities populated with grocery clerks and bus drivers who live in crowded households and are forced to mix with the public every day, infection rates are far higher. In Los Angeles County, roughly 15 percent of coronavirus tests in recent days are positive; at a testing site on the hospital’s campus, the rate is about 25 percent.

As a result, the burden of the surge is much heavier at that hospital than those in wealthier areas of Los Angeles. According to recent statistics, 66 percent of the hospital’s capacity was taken up by Covid-19 patients — making it, in effect, the epicenter of the epicenter. Across town, on the whiter and richer West Side, 11 percent of Ronald Reagan U.C.L.A. Medical Center’s bed capacity was filled with coronavirus patients.

Officials at Martin Luther King Jr. Community Hospital, where most patients are on Medicaid or uninsured, say they are struggling to transfer patients to bigger hospitals when they need a high level of care, such as neurosurgery or a cardiac procedure.

She added: “We’ve had a lot of talk about systemic racism and social justice and everybody says they want to do something about it, but our health care system is a huge reflection of separate and unequal. And the Covid pandemic is highlighting the same patterns.”

Ms. Thompson, who some days has been working from 7 a.m. until midnight, is thankful to have Christmas Day off, and will spend it with her four children. Her parents, who live nearby but whom she has not mingled with during the pandemic, will be on Zoom.

But the holiday will only be a brief respite, and she is scheduled to work over New Year’s, handing a surge with no end in sight.

“Trying to work all this overtime and then trying to keep up with all the death and dying and trying to keep a straight face and keep moving forward, it’s exhausting,” she said.