Sometime around 2014, little hearts drawn in chalk mysteriously began appearing on the streets of downtown Manhattan. Some materialized in clusters on sidewalks, while others cascaded along blocks. The hearts inevitably faded away, but for New Yorkers who encountered them, they offered a respite from the harshness of city life.

At least that was the intention of their creator, a street artist named Hash Halper, who started drawing the hearts as a gesture of affection for a woman he was dating. The relationship didn’t last, but the hearts made him feel better, so he kept drawing them. Mr. Halper soon began spreading the healing properties of his hearts, calling himself New York Romantic.

Mr. Halper, who became a beloved fixture in neighborhoods like SoHo and the East Village, died on June 11. He was 41.

His mother, Hana Nancy Halper, said he had jumped off the Brooklyn Bridge.

“When he was making those hearts, he was making New York into a storybook that we might all want to live in,” the writer Lily Koppel, a close friend, said by phone. “To him, New York seemed to be losing its soul, and he was trying to put back its soul, and in the end I think it wore him out.”

Shortly before his death, Mr. Halper, who was also a painter, had been preparing for a solo exhibition at a venue on Hudson Street that would showcase his artwork. But, his family said, his paintings were destroyed during an altercation with someone who attacked him in his Lower East Side apartment. Rattled by the incident, he took to the streets and was seen two days later walking barefoot in SoHo.

After his death, people gathered at his favorite stoop on Prince Street to make a memorial with chalk hearts.

Tall and shaggy-haired, Mr. Halper could be seen wearing stylish hats or a red suit covered in hearts while he planted himself on streets for hours, bringing his hearts into existence with pieces of pink, blue and yellow chalk and a swift swoop of his hand. Over time, he became something of a downtown folk hero, cherished for his ability to conjure up positivity with a humble shard of chalk to an otherwise tumultuous city.

Once, when he learned that a woman was having a rough time with her romantic life, he began chalking hearts outside her workplace; she met someone special a few weeks later.

When police officers would confronted him about his hand-drawn graffiti, he would ask them, “Why are you so upset about a heart?” 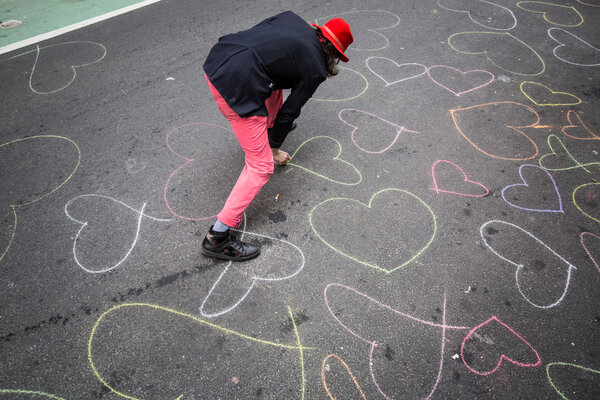 New Yorkers cheered Mr. Halper on for his defiantly bohemian lifestyle, but he harbored his own struggles as an artist in the city.

He grappled with sobriety. When he had jobs, he didn’t hold them for long. He was at times homeless and would sleep on the benches of Washington Square Park or the couches of friends. His family had paid his rent over the past year in an apartment on Broome Street that he shared with roommates.

“He didn’t tell people that he was troubled because it was dissonant with his public persona,” his brother Omkar Lewis said. “He was the heart guy, so he couldn’t reveal his problems to the world, because he was the guy carrying other people’s pain.”

Tzvi Mair Lewis was born on April, 21, 1980, in Philadelphia. His father, Eliot, worked as a personal injury lawyer. His mother is a public-school teacher. A grandmother, Estelle Halper, was a celebrated ceramist who lived in Greenwich Village, and he took her last name when he discovered his artistic calling.

Heshy, as he was called growing up, was raised with five siblings in an Orthodox Jewish household in Elkins Park, Pa. As a boy, his father drove him to Brooklyn to visit the Chabad-Lubavitch headquarters in Crown Heights, where he listened to sermons from Rebbe Menachem Mendel Schneerson. He moved to New York when he was 14 and attended Yeshiva University High School for Boys in Washington Heights. He studied history at Yeshiva University and graduated in 2002.

By his late 20s, he was calling himself Hash and had immersed himself in the city’s downtown arts and nightlife scene. He curated underground art shows and once sold paintings with the artist Dash Snow outside the brasserie Balthazar. One show he organized in the meatpacking district drew hundreds of people, but was also stressful and triggered a nervous breakdown, his mother said. His family found him taking refuge at the synagogue of the Chabad-Lubavitch headquarters

“I wanted to get him out of New York,” his mother said in a phone interview. “I don’t think it was good for him, but he lived and breathed New York.”

Mr. Halper first began drawing hearts with markers on bags for customers at Kossar’s Bagels & Bialys on the Lower East Side when he was working there in 2014. After that, he picked up a piece of chalk.

In addition to his mother and his brother Omkar, Mr. Halper is survived by his father; two other brothers, Asher and Mick Lewis; and two sisters, Sara and Este Lewis.

As of late, Mr. Halper had been more seriously pursuing his fine art, and his solo show was going to showcase a series of his paintings featuring heart motifs. The show was canceled, but over the last year, during the coronavirus pandemic, Mr. Halper heeded his call as New York Romantic with more purpose than ever.

On even the darkest days, he walked out into the lonesome East Village, and he got to work. Over and over, chalking away in a flurry, he summoned hundreds of hearts that illuminated the neighborhood.