When a teacher asked a classroom of third graders what they wanted to be when they grew up, boys shouted out professions like “baseball player” and “astronaut.”

But one student, Eddie, declared, “I want to be a garbageman like my father.”

The teacher disapproved. “Don’t you think he’d want you to be better than that?”

Edward Grayson, now 44, was insulted yet undeterred. This week, Mr. Grayson, who was appointed the acting commissioner of the New York City Department of Sanitation just three months ago, faced down the biggest snowstorm to hit the city in years. He appeared in front of news cameras as the face of the city’s snow removal effort.

He led the department in clearing snow from the city’s 6,300 miles of streets: no small feat during a pandemic. The department has 400 fewer workers than normal because of cutbacks stemming from the drastic drop in tax revenues this year. The virus crisis has also transformed the streetscape; scores of curbside outdoor dining booths have created obstructions for the plows that work to make streets passable.

At a news conference on Thursday morning, Mayor Bill de Blasio commended his acting commissioner and the agency for doing “an amazing job” in tackling a storm that pummeled the city with nearly a foot of snow.

Mr. Grayson, who spent 21 years working his way up through the Sanitation Department’s ranks, had left little to chance. He spent Wednesday night driving behind plows and inspecting streets before grabbing a nap on a cot in his office in Lower Manhattan and joining Mr. de Blasio at the news conference the next day.

Since his first job as a trash collector, Mr. Grayson has worked many snowstorms, whether driving a plow-equipped garbage truck or overseeing operations as a supervisor and then a chief.

“Serving as the commissioner, you feel the difference,” he said. “There’s definitely a lot on the line.” 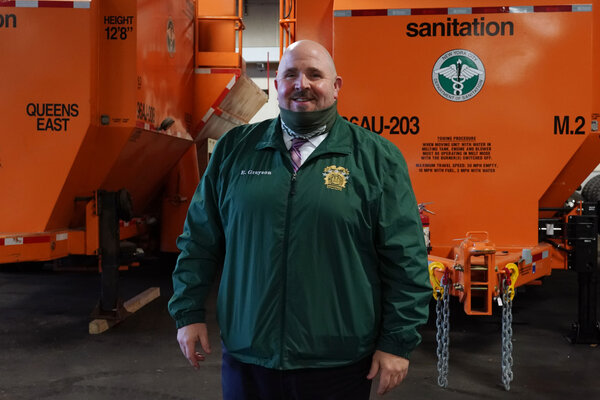 Now, he is working to keep his job. When Mr. de Blasio leaves office at the end of next year, the incoming mayor, who gets to appoint new commissioners, will decide Mr. Grayson’s fate.

A burly man with a Queens accent, Mr. Grayson took center stage at media briefings and news segments all week to assure New Yorkers that he and his fellow trash haulers were there to help protect the city from being crippled by a winter storm.

For the leaders of city agencies, there are few bigger public stages than the kind a snowstorm sets for a sanitation commissioner, a position that comes with the risk of outsized political blowback when plowing does not go smoothly. Botched snow removals have wreaked political damage upon city commissioners and mayors over the decades. In 2010, for example, a December storm left City Hall so flat-footed that Mayor Michael R. Bloomberg rushed home in his private jet from Bermuda, and the sanitation commissioner, John J. Doherty, was so discouraged he considered resigning.

“People want the streets cleared quick, so it’s a tough struggle,” said Mr. Doherty, 82, who like Mr. Grayson also rose through the ranks. “At times, these snowstorms can be more political than anything else, and I think Eddie is sharp enough to know that the public is going to grade you on how well you did.”

With Mr. Grayson as chief of daily operations, the department has come under criticism this year for picking up trash more sporadically during the pandemic, which the agency attributed to budget cuts.

But snowstorms are a strong suit for Mr. Grayson, who himself can mount a plow on a truck or wrap snow chains around tires. For years, he was the department’s “snow chief,” and in recent years he helped implement the tracking systems that monitor plowing in real time.

“The GPS will tell you what streets are done, but it can’t tell you about the conditions on the ground,” said Mr. Grayson, adding that when he first began plowing in Queens, in 1999, he worked off a paper map. “You need live feedback from the driver on the street, and I can understand that because I’ve been that guy.”

Mr. Grayson grew up in Middle Village, Queens, which he described as a working-class neighborhood. He said he was raised in a “sanitation family”: His parents both worked for the department.

“It was a neighborhood where you automatically signed up for your civil service tests as soon as you turned 18,” he said.

His father, also Edward Grayson, collected trash and retired as a supervisor in 1988.

“He was always smart and had the gift of gab and he’s able to do that balancing act politically,” his father, 74, said about his son’s rise in the department. “They just gave him the football and off he went.”

His mother, Patricia Grayson, made a name for herself as a recycling outreach coordinator who was persuasive enough to get New Yorkers to accept separating recyclables from trash as the city began rolling out its program in the early 1990s. In that role, The New York Times called her “an icy-eyed zealot with a tone of voice that would make Patton seem meek.”

Her son shares her powers of persuasion, but seems to lean more on his affability, which was on display Tuesday as he inspected part of his snow removal fleet in a sanitation garage in Lower Manhattan. He joked and hobnobbed with workers, hugging them and asking about their families.

But his casual chatter belies an obsessive work ethic.

Since last winter had little snowfall, he worried that his staff had grown rusty in carrying out the synchronized operation of following plowing routes. So in October, he helped run training with a mock forecast and practice routes that incorporated outdoor dining locations.

On Thursday, city officials reported that no dining structures had been struck by plows.

Colleagues say Mr. Grayson is adept at motivating his workers, known as New York’s Strongest, to pivot from collecting 12,000 tons of waste a day to plowing — grueling work often done in blinding snow for long shifts.

Eric Forster, 45, is a retired sanitation supervisor who has worked with Mr. Grayson. “Eddie’s like Braveheart — he’s the guy you want to be charging behind,” he said. “He’s a street kid from Queens who had a passion for the job from Day 1 and made it a point to know every aspect, from what grade bolts need to put on plow to how to use a smart board for payroll. The man lives and breathes the job.”

Kathryn Garcia, Mr. Grayson’s predecessor who resigned in September after more than six years as commissioner, to run for mayor, said Mr. Grayson had a nimble leadership style that tried to maximize the talent and ideas of workers.

Mr. Grayson is so unaccustomed to his new title that when someone addresses him as commissioner, he said, he reflexively turns his head to see if Ms. Garcia is there.

But he stepped into the role eagerly the night of the storm, when he was driving in Manhattan, monitoring the plows near the dining structures in the narrow streets of Little Italy and watching the large avenues on the Upper East Side being cleared.

“There’s a part of me that still wants to see it and understand what my men and women are going through,” he said.