THOUSAND OAKS, Calif. — At 22, Brendan Kelly has experienced more mass violence than anyone should face in a lifetime. He has used his 6’3” frame — twice — to protect friends during mass shootings, first in Las Vegas and then at his favorite bar in Thousand Oaks.

In two weeks, he will deploy to Afghanistan for his first tour of duty as a Marine.

Not for a moment did he ever consider delaying his service overseas after a gunman killed 12 people at the Borderline Bar & Grill in November, where he and his friends often went to drink and dance to country music, he said. Instead, his experience has only made him feel more determined to fight enemies abroad and protect what he sees as essential freedoms he has here, like the right to bear arms and to worship freely.

“This is what I can do,” he said of his military service. “This is what my role is supposed to be, as an able bodied and willing young man.”

Still, in moving from domestic massacres to war zone, from hero at home to soldier abroad, Mr. Kelly offers a portrait at once inspiring and deeply troubling of how we live with violence, how we can both transcend it and be indelibly scarred by it at the same time.

After two of his friends were killed last month, Mr. Kelly mourned his losses by tattooing their names on his left shoulder, alongside a skull with a cowboy hat. On his back is a quote from a friend who was with him in Las Vegas when 58 people were killed at a country music concert in 2017: “In this game called life, no one makes it out alive.”

The irrationality of the attacks did not rattle Mr. Kelly’s faith in God, he said, but reinforced it. “As a religious man, but also as a human being, I know we’re all going to die someday, unfortunately,” he said. “But it’s something we all have to come to terms with, some of us sooner rather than later.”

While nursing a beer on a recent afternoon at Cronie’s, a local sports bar that has become a de facto headquarters for those who had lived through the Borderline shooting, he said, “God has big plans for me, and I know that.” He added, “Even though I’ve been through all these events, I am just a guy that’s trying to figure it out like everybody else is at the end of the day. And try to make sense of it all. It’s going to be O.K. that it doesn’t make sense because there’s no real way for it to make sense.”

Next month will be Mr. Kelly’s first deployment with the Marines since he signed up for the reserves in 2015. He was inspired by two of his brothers, who enlisted immediately after high school. Their grandfather served for decades; their father grew up moving through military bases. 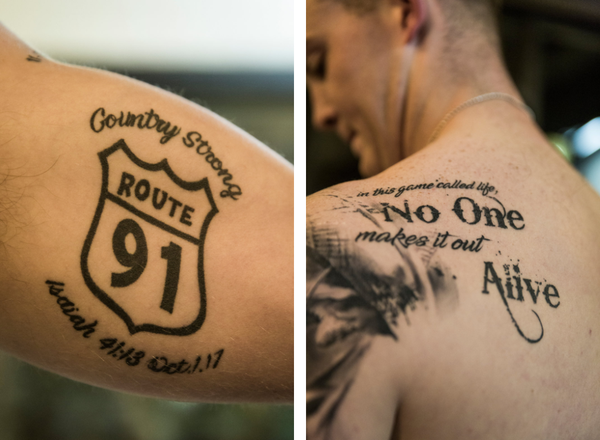 The night of the shooting, Mr. Kelly’s father came to help, staying there for hours while his son wrapped tourniquets. The pair spent the night outside of the local teen center, where families gathered to reunite with people who had been inside.

Mr. Kelly silently counted heads, trying to account for which of his friends were there, and which of them had made it out. It would be hours after dawn before he learned that two of the guys he had taken a photo with that night had not made it out alive.

Since the shooting, he has been going “nonstop” — nights in local bars with friends, a concert in San Diego, a weeklong trip to Las Vegas for the National Finals Rodeo. He has spent countless hours with two of his close friends who also survived both shootings, the second coming just as they felt their lives returning to normal after the first.

Late last week, Mr. Kelly embraced dozens of friends at a party organized by the owners of Borderline. He had seen many of them before — for several days after the shooting they met up in parking lots and empty fields to line dance. But this was what they had really missed, seeing their favorite DJs and dance instructors, sweating under bright lights.

For the last several days, he has forced himself to sit in front of the computer to complete training courses he is required to do before his unit leaves. Being there has made it easy to turn to anyone in his large family for comfort — he is one of a set of quadruplets and has two other younger siblings.

“There have been nightmares, it’s something I can’t really control,” he said. “I wake up and shake myself out of it and write it down and maybe even talk about it.”

He took a deep breath. “Mostly replaying the terrible things that happened that night,” he said before pausing several seconds. “And potentially what could have happened.”

That’s what gets him, replaying that night, his friends suddenly soldiers on a battleground they never volunteered for. Could he have done more? Could he have rushed the gunman? Could he have gone back in? He knows about survivor’s guilt. He experienced it after Las Vegas last year, when he was lionized for saving a young woman he had just met that night.

He put a tattoo underneath his left biceps then, with the logo of Route 91, as the annual country music festival is called. Mr. Kelly has plans to connect the pair of tattoos commemorating each shooting. But the Marines do not allow tattoo sleeves, so it will have to wait until 2021, or longer if he re-enlists. For now, his friends tease him about showing them off readily, even taking off his shirt if someone asks to see them.

When a mother brought over her 4-year-old son during lunch one recent afternoon, Mr. Kelly did not hesitate to agree to a photograph, lifting the preschooler high above the ground and handing him a quarter for the vending machine. It was not the first time a stranger asked him to pose together, but he still finds it “very surreal.”

Mr. Kelly has taken to his new role as a “light for the community,” using it as a way to push through his own pain.

“Absolutely, it feels like a lot of what this time has been for me is being strong for other people,” he said. He briefly saw a therapist after Las Vegas, he said, but he found more help and comfort in friends and family. David Anderson, one of his friends who also lived through both shootings, has urged him to seek therapy again now, but so far, Mr. Kelly has rebuffed the suggestion.

Mr. Kelly’s commanding officer has repeatedly checked in with him, asking how he’s doing. But there was no suggestion that he postpone his mission. Just as he felt after Las Vegas, Mr. Kelly is determined to go on living just as he had before — he never stopped going to concerts or large events.

His parents worry that the “perpetual motion” of the last several weeks means he is yet to process what happened.

“He hasn’t slowed down enough at all and he’s leaving in a matter of days,” his father, Ryan Kelly said. “I am concerned that he’s going to get over there and that’s when it’s all going to come down on him. He’s going to have to compensate and deal with that under enormous pressure.”

Already, there are signs of how he’s changed: He never sits with his back to the door and constantly scans rooms for potential dangers. Even at church, he specifies where his family can sit. His father said he can get jumpy at the sound of Bubble Wrap. After Las Vegas, he took an emergency medical technician course, determined to learn skills in case he ever faced a similar situation again. He applied for a conceal carry permit earlier this year, not long after his father received his own. He had already completed active shooter drills in the Marines: “We all know it’s run, hide or fight — fighting being the last resort.”

He said his comfort around firearms, which he uses regularly during military training and during off-duty visits to the firing range with his family, has only grown since these shootings.

Mr. Kelly does not know precisely where or how long he will be in Afghanistan, likely about six to eight months. He finished his last day at Costco, where he’s worked as a membership manager for nearly three years. When he comes back, he wants to begin taking courses to become an urban firefighter. He does not spend any time thinking about how a fellow Marine could have chosen to kill so many people in the idyllic community they both grew up in.