PORTLAND, Ore. — The heat took Sebastian Francisco Perez, 38, as the Guatemalan-born farmworker moved irrigation lines in a field in Marion County, Ore., on Saturday in record temperatures that soared to 104 degrees.

Debra Moore, 68 and recovering from chemotherapy, was found on Monday on the blistering sidewalk in a community at the base of Mount Rainier, hours after she collapsed just steps from the house she was visiting, the police said.

Dorothy Galliano, 85, died from hyperthermia sometime over the weekend in Seattle’s Seward Park neighborhood where she was a vibrant fixture. Emergency medical workers found her on Tuesday in her home, which had no air-conditioning.

“The temperature outside was so high, you could only stand it a minute,” said Ms. Galliano’s friend Ann Pinsky, who lives three blocks away and who has wished all week that she or some other neighbors had checked to see if the older woman, who lived alone, was safe from the record heat wave.

“The Fire Department found one of her windows open a crack and the TV on, and I imagine her sitting down to watch TV and getting fuzzy and dozing off,” Ms. Pinsky said. “And then she is gone.”

As the Pacific Northwest recovers from the dome of extreme heat that hit last week and spiked temperatures into the triple digits for days before starting to recede on Tuesday, authorities are beginning to tabulate its awful toll.

In Washington and Oregon alone, authorities have attributed at least 80 deaths to the sustained spike in temperatures. The chief coroner of British Columbia said at least 486 sudden deaths were reported in the province from Friday to Wednesday afternoon, a five-day period in which 165 such deaths are typically reported. 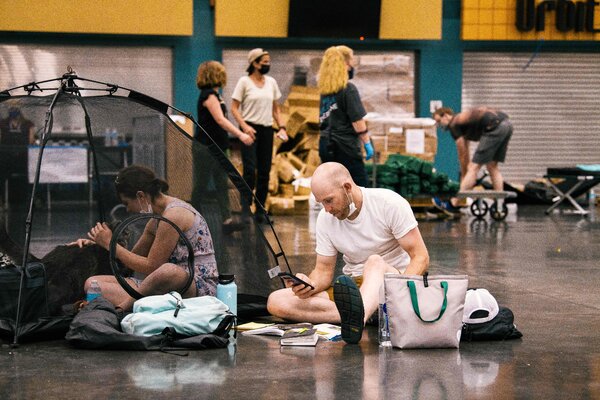 Because global warming has raised baseline temperatures by nearly 2 degrees Fahrenheit on average since 1900, heat waves like the one in the Pacific Northwest are now likely to be hotter than those recorded in past centuries. Over the past 30 years, extreme heat has led to more deaths in the United States than other extreme weather events, such as hurricanes and floods, although estimates for the number of heat-related deaths have varied.

According to the Centers for Disease Control and Prevention, there were 505 heat-related deaths in the United States in 2019, the most recent year for which data is available. But the real numbers could be much higher. Another study, which looked at excess deaths in the country’s 297 most populous counties, found that approximately 5,600 deaths could be attributable to heat each year.

Last week, residents throughout the region expressed their alarm at the suddenness and severity of the heat, which struck just as they were beginning to emerge from the coronavirus pandemic, anticipating the usual temperate summer.

Instead, slammed with temperatures more characteristic of Death Valley, Washington highways buckled and Portland’s TriMet public transit system ground to a halt as its overhead wires sagged and expanded. The University of Washington Medical Center treated more than 100 patients for heat-related illness.

In Seattle, Ms. Pinsky said she watched, aching, as a nest of baby crows in her yard struggled to get out of the scorching sun, only to perish.

“I’ve been in this neighborhood almost 50 years,” she said, “and I’ve never experienced weather like this.”

On Thursday, officials in Oregon — which in the previous 20 years combined had recorded 72 official heat-related deaths — updated its heat-related death toll since Friday to at least 68. More than 50 of those deaths were in Multnomah County, which includes Portland. The average age of those who died there was 67.

“It’s really a tragedy, and a lesson that heat does kill,” said Dr. Jennifer Vines, the Multnomah County health officer. “In general — we’re still sifting through the numbers — these were people found in very hot settings, basically alone, and by and large older people.”

Normally, sweating dissipates the heat. But when it is too hot and too humid for sweat to effectively evaporate, the excess heat raises the body’s core temperature, eventually shutting down muscles and organs.

Some, like Mr. Perez, died outdoors, lacking acclimation to the sudden furnacelike air around them. A day laborer at the Ernst Nursery and Farms, a plant nursery in the green and fertile Willamette Valley, he — like many of the area’s farmworkers — had continued to work even as much of the surrounding area shut down for the heat wave.

“I felt sick from the heat,” said a fellow farmworker who asked to be identified only by her first name, Guadalupe. “You make the sacrifice to make the money. You don’t go to the restroom or drink water. That’s farm life.”

Some of those who died were already ill. Ms. Moore, who was found on a sidewalk in the community of Enumclaw, 42 miles from Seattle, had recently undergone chemotherapy, according to Tim Floyd, the police chief.

“She had significant, significant pre-existing conditions and walked with the assistance of a cane or walker,” he said, adding that she had apparently tripped and fallen as she navigated a bumpy walkway. She was visiting friends, he said, and they did not find her for hours because they had their blinds closed.

“One of her friends happened to look out and see her car,” the chief said. “And then they looked further and saw her.”

The demand on hospital staffing and infrastructure over the weekend, he said, was reminiscent of the early days of the Covid-19 pandemic. Four hospitals in Washington State lost power temporarily. Operating rooms were closed in some hospitals because they could not guarantee safe temperature and humidity controls.

“Finding nurses is becoming a real challenge for everyone in our state,” Dr. Mitchell said, “so when you add additional stress, such as this severe heat wave, it further stresses our staff.”

In British Columbia, the heat wave exacerbated a wildfire that engulfed the village of Lytton, a town of about 300 people, forcing residents to flee on Wednesday night. Ninety percent of the town, including its center, is burned down, and transport and telecommunications infrastructure have sustained damage, Brad Vis, a member of Parliament representing Lytton, said in a statement posted to Facebook.

The cause of the fire in Lytton was yet to be determined, but heat, dry conditions and wind had helped it spread, Jean Strong, an information officer from the B.C. Wildfire Service, said in a private message on Twitter.

The blaze followed three consecutive days of record-shattering heat, with temperatures in the area reaching just over 121 degrees Fahrenheit on Tuesday. The heat wave has roasted the country’s western coast, persisting as Canadians gathered for Canada Day, the date, July 1, 1867, when three British colonies were joined together to create the Dominion of Canada.