Weather: Showers likely today, maybe even a thunderstorm, with a high in the mid-80s. 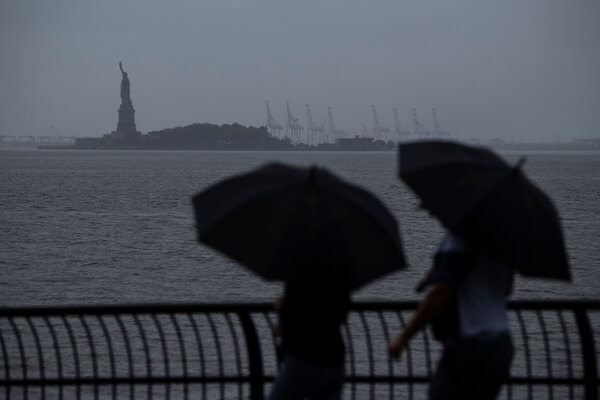 There may have been record-setting rainfall, flooded streets and a much-anticipated concert cut short this weekend, but most of New York escaped the worst of Tropical Storm Henri. The storm made landfall in southwestern Rhode Island on Sunday morning after being downgraded from a hurricane.

Before landfall, the storm’s path — and its worst effects — had shifted eastward. And by Sunday evening, even as it moved slowly northwest across Connecticut and was expected to linger near that state’s border with New York, the storm was weakening rapidly, weather officials said.

Still, they said three to six inches could fall on parts of the state through Monday night, particularly the lower Hudson Valley, raising the possibility of dangerous flash flooding. At least one flash flood warning was issued in the Bronx on Sunday evening.

[Tropical Storm Henri knocked out power in most of coastal Rhode Island, forced evacuations in Connecticut and stranded dozens of motorists in New Jersey.]

The storm dropped an extreme amount of rain before it made landfall.

In Central Park, 1.94 inches of rain fell between 10 p.m. and 11 p.m. Saturday, the most in a single hour there “since record keeping began,” according to the National Weather Service.

On Sunday afternoon, the Weather Service said that almost eight inches of rain had fallen in Brooklyn over 36 hours, with more expected on Sunday night.

A concert on the Great Lawn of Central Park on Saturday, which was supposed to be a celebration after more than a year of hardship during the pandemic, was cut short halfway through because of lightning. The concert, called “We Love NYC: The Homecoming Concert,” had been touted for months by city officials.

Bruce Springsteen, Paul Simon and several other headliners had yet to perform when the concert was ended abruptly.

16 Cats, 320 Square Feet and One Long-Shot Candidate for Mayor

2 New York Judges Ordered Defendants to Get Vaccinated. Can They Do That?

A Hospital Finds an Unlikely Group Opposing Vaccination: Its Workers

A man was hit in the head with a hammer by a stranger and sent falling onto the subway tracks at a station in Manhattan, after the attacker warned “don’t look at me or I’m going to hit you,” the police said. [Daily News]

People jumped out of the windows of a home in Queens when a fire broke out after a wedding celebration. [N.Y. Post]

Lt. Gov. Kathy Hochul, who will become the state’s next governor on Tuesday, has more experience in local government than any of her predecessors. [Politico]

And finally: A doughnut-filled vaccination quest

Joe Caramagna, a man who searches “doughnuts near me” when he travels, had never lived a short walk from a doughnut shop. This was a problem.

But one morning in April, he took a walk near his home in Paramus, N.J., and spotted on a building, written in crisp red cursive script, a sign he never thought he would see less than a mile away. “Krispy Kreme,” it read.

The chain had recently announced that vaccinated people could get one free glazed doughnut a day until the end of the year. Mr. Caramagna had received his second dose of the Pfizer vaccine a few days before. “It was kismet,” he said.

Realizing the stars had aligned and popped him into the vacant center of his doughnut-obsessed world, he decided to channel his sweet cravings for a bigger purpose.

Mr. Caramagna, a comic book writer, set out on a mission: He would eat one free Krispy Kreme doughnut a day until the end of the year. For each doughnut devoured, he would donate a dollar to charity. He picked the Ronald McDonald House Charities of the Piedmont Triad, a nonprofit organization that helps children access medical care.

Mr. Caramagna specifically wanted to help them because his oldest daughter, now 17, was born with meconium aspiration syndrome, a respiratory illness that is a leading cause of death among newborns, according to Johns Hopkins Medicine.

On a GoFundMe page where he has raised about $500, he says that beyond trying to encourage people to get vaccinated, he hopes others will “DOUGH-nate (har har)” to the Ronald McDonald House in Winston-Salem, N.C., the city where Krispy Kreme is based.

Mr. Caramagna, 45, is one of the thousands of people across the nation and around the world who have started their own small vaccine campaigns. They hope to persuade even a few people to get the shot, raise money for charities, or, if nothing else, offer their friends and neighbors a little cheer in a dark time.

“I don’t know if I’ve changed anyone’s mind on the vaccine, but I know I’ve certainly convinced people to go to Krispy Kreme,” he said. “To have a mission every day that no matter what, I have to go get the doughnut — I mean, it’s silly, but I feel like I’m doing something positive in this world that could probably use a little positivity.”

One early fall morning some years ago, I decided to walk to the Metropolitan Museum of Art and spend a few hours there before meeting a friend for lunch.

It was one of those days when the weather could not make up its mind between bright and sunny or cool and cloudy. I grabbed a sweater from the closet, wrapped it around my waist and set off.

After wandering through the museum’s galleries for a while, I headed south on Fifth Avenue to meet my friend. The sun had just disappeared behind a large bank of gray clouds, and I was glad I’d brought a sweater.

Standing at a corner waiting for the light to change, a man at a hot-dog stand waved and called out to me.

He reached under his cart and pulled out a light blue windbreaker.

“Could you please take this to my wife?” he said. “She has a hot dog cart just like this one.”

“Of course,” I replied, grabbing the jacket just as the light turned green. The man grinned and waved.

About 10 minutes later, I spotted a shiny steel hot-dog cart. A woman stood beside it, her shirt collar turned up against the cool breeze.

“Your husband sent you this,” I said, handing her the jacket.

“Oh, thank you so much,” she replied with a smile, quickly putting the jacket on. “He is a good man.”