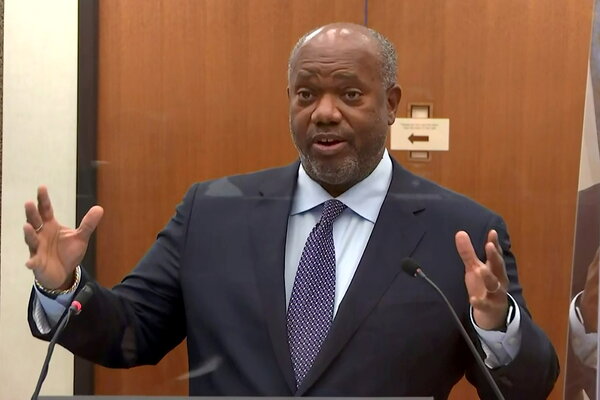 Three witnesses testified on Tuesday morning, the second day of the trial of Derek Chauvin, a former Minneapolis police officer who has been charged with murder in George Floyd’s death. They included Darnella Frazier, the teenager who took the widely shared video of Mr. Chauvin kneeling on Mr. Floyd’s neck.

Here are highlights from the second day of trial:

Judge Peter A. Cahill ruled in the morning that four witnesses who are 18 or younger — including Ms. Frazier, her cousin and two others who are expected to testify on Tuesday afternoon — could deliver their testimony off-camera. Audio of their testimony will still be broadcast live, but the cameras will be trained on the judge or the lawyers questioning them.

Ms. Frazier, who was 17 when she recorded the cellphone video of Mr. Floyd’s arrest that brought widespread attention to his death, gave emotional testimony in court, saying she had felt regret for not physically confronting Mr. Chauvin, but that he was the one who was ultimately at fault. “When I look at George Floyd, I look at my dad,” said Ms. Frazier, now 18. “I look at my brothers, I look at my cousins, my uncles, because they’re all Black. I have a Black father. I have a Black brother. I have Black friends.” She added, “I look at how that could have been one of them.”

Ms. Frazier’s 9-year-old cousin, who was walking with her to the Cup Foods convenience store when they came upon the arrest, also briefly testified: “I was sad and kind of mad,” she said of seeing a police officer with his knee on a man’s neck. “It felt like he was stopping his breathing and it was kind of like hurting him.”

Donald Williams II, a mixed martial arts fighter who was also at the scene of Mr. Floyd’s arrest, had a testy exchange with the lawyer for Mr. Chauvin, who sought to emphasize that Mr. Williams did not have adequate medical or police training to evaluate the arrest of Mr. Floyd. Mr. Chauvin’s lawyer, Eric J. Nelson, also highlighted the loud crowd that formed as Mr. Floyd was being arrested. But Mr. Williams pushed back, saying, “You can’t paint me out to be angry.”