Weather: Mostly sunny with highs around 90, rain increasingly likely toward the end of the day. The weekend will be cooler and mostly cloudy, with some rain. 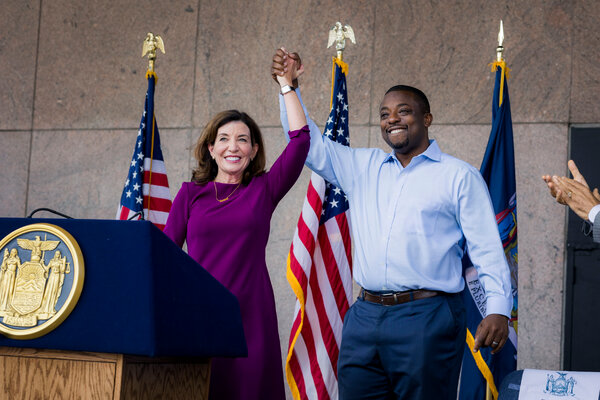 [Read more about Mr. Benjamin and his time in politics.]

Mr. Benjamin ran for State Senate during a special election in 2017 and won the Democratic Party’s pick for the seat, which represents a large swath of Upper Manhattan, after a convention vote in March. He defeated his Republican opponent and took office that June.

The senior assistant majority leader in the State Senate, Mr. Benjamin has long been a supporter of criminal justice reform. He has backed efforts to close Rikers Island and supported legislation on a range of criminal justice issues, including ending cash bail and solitary confinement, and reforming parole laws.

The lieutenant governor position has usually been a ceremonial role, but Ms. Hochul said she wanted to avoid that for whomever she picked for the position.

Mr. Benjamin’s appointment is the one of the latest announcements from Ms. Hochul, who was sworn in as New York State’s first female governor on Tuesday. In her first daily update on the coronavirus pandemic, Ms. Hochul announced that nearly 55,400 people have died of the coronavirus in New York.

The total, based on death certificate data submitted to the federal government, was 12,000 more than former Gov. Andrew M. Cuomo publicly reported on his last day. During Mr. Cuomo’s tenure, the state’s method for counting coronavirus deaths allowed the number used for his briefings and the state’s online dashboard to be thousands lower than what was recorded with the federal government.

Ms. Hochul has vowed that her administration would be more transparent with New Yorkers about confronting the state’s most pressing needs.

The Dream May Be Over for the Grand Prospect Hall

He’s Still Fighting Developers for the Park His Father Founded

A Black Veteran’s Wife Feared for His Safety. Officers Fatally Shot Him.

With a staff shortage in city jails, incarcerated people aren’t getting escorted to their medical appointments, according to an investigation. [The City]

As the pandemic continues, the federal unemployment financial assistance program is set to expire Labor Day, leaving many vulnerable. [Gothamist]

Two doctors and two lawyers have been charged for carrying out a slip-and-fall scheme that netted them $31 million. [New York Post]

And finally: Your social weekend

While people are still connecting through virtual events and programs, with the summer season here and more people getting vaccinated, venues and organizations are holding in-person events. Here are suggestions for maintaining a New York social life this weekend:

In person: “Awkward Sex … and the City”

On Friday at 8 p.m., celebrate the eighth anniversary of the “Awkward Sex … and the City” storytelling show in Brooklyn.

Purchase tickets ($15) on the event page.

Enjoy an afternoon listening to folk music at Washington Square Park in Manhattan on Sunday at 1 p.m.

On Sunday at 5 p.m., join the Free Black Women’s Library for a discussion with the author of “Somebody’s Daughter,” Ashley C. Ford.

Register for free on the event page.

Metropolitan Diary: A T-Bone rides the 1

A T-bone steak was riding the uptown 1 train on the evening of July 5. I noticed this oddity when I boarded at 34th Street. The steak sat alone at the end of a row of orange seats: fresh, bright red and grocery-wrapped in plastic on a white, plastic foam tray.

I broke the ice.

The couple next to me supposed that someone had dropped it.

The couple got up to leave. I had taken an open seat across from the steak, so the row was empty again.

“If you want to enjoy that T-bone,” the man said, giving me a friendly slap on the back as he got off the train, “it’ll be our secret.”

At the next stop, a small man in moccasin slippers and no shirt got on. The white tray took up half of the seat next to the door, and he sat on the other half, over the molded seat ridge. Odd.

“T-bone,” I said, gesturing toward the meat. “Full pound.”

The man peered to his side. Eventually he became curious, picked up the steak, felt it and then tossed it a seat or two away.

I thought about using the other guy’s line on him when I left. But I missed my chance. The man in the moccasins exited hastily at 86th Street. He had grabbed the steak. And I never promised him it would be our secret.

(Really, I’m sure it was perfectly fine.)