The charges were announced on Tuesday by prosecutors in Honolulu, less than a week after a grand jury had declined to indict the officers in connection with their actions leading up to the death of Iremamber Sykap on April 5.

“The evidence supports the conclusion that the defendants’ use of deadly force in this case was unnecessary, unreasonable, and unjustified under the law,” Christopher T. Van Marter, a deputy prosecuting attorney, wrote in a criminal complaint.

Prosecutors said that Geoffrey H.L. Thom, the officer charged with second-degree murder, had fired 10 shots “without provocation” into the rear window of a Honda driven by Iremamber, hitting him eight times.

Iremamber’s brother, Mark Sykap, who was in the front passenger seat, was struck in the right shoulder and the left hand when the officers opened fire, a criminal complaint said. He survived.

The gearshift lever of the car was still in the drive position when Iremamber was shot, and the vehicle struck an empty patrol car, climbed onto the sidewalk, went through a fence and landed in a canal about 10 feet below street level, investigators said.

Prosecutors said that Officer Thom had written in a police report that the Honda had rammed his patrol car and had reversed toward him. But body camera footage, they said, contradicted those statements. His patrol car had a few minor paint chips and scuff marks, a criminal complaint said.

Officer Thom, 42, a five-year veteran of the Honolulu Police Department, did not immediately respond to a phone message on Wednesday requesting comment. It was not clear if he had a lawyer.

The two officers who were charged with second-degree attempted murder were identified by prosecutors as Zackary K. Ah Nee and Christopher J. Fredeluces.

Prosecutors said that Officer Ah Nee, 26, a three-year police veteran, had fired four shots without provocation toward the passenger side of the Honda after it struck his empty patrol car. Two of those shots hit Iremamber’s brother, according to a criminal complaint.

Officer Ah Nee wrote in his report that he thought he had seen the butt of a firearm in the lap of the front-seat passenger, but body camera footage contradicted his account, the criminal complaint said.

A message seeking comment from Officer Ah Nee was left with a person who answered the phone at his home on Wednesday. It was not clear if he had a lawyer.

Prosecutors said that Officer Fredeluces, 40, a 10-year veteran of the Police Department, had fired one round from his Glock 9-millimeter pistol into the driver’s side door of the Honda, but the bullet did not strike Iremamber.

Officer Fredeluces could not immediately be reached for comment on Wednesday. 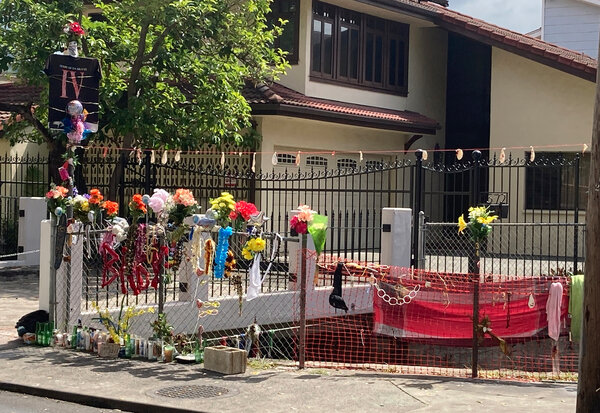 If convicted, all three officers would face mandatory sentences of life in prison and would be eligible for parole only after serving 20 years because semiautomatic firearms were used in the shooting.

Their police powers have been removed, according to the Honolulu Police Department, which said that they had been placed on desk duty.

“We are surprised by the prosecuting attorney’s announcement to seek charges against the officers after a grand jury comprised of citizens decided not to indict them,” Chief Vanic said in a statement. “This is highly unusual, and we are not aware of a similar action having been taken in the past.”

Matt Dvonch, special counsel to the Honolulu prosecutor, Steven S. Alm, said in an interview on Wednesday that it was not the first time that the office had asked a judge to determine if there was probable cause after a grand jury did not return an indictment.

“It is not that common,” he said, “but it does happen on occasion.”

Eric Seitz, a lawyer for the Sykap family, was not immediately available for comment on Wednesday, but he told The Associated Press on Tuesday that he was gratified that prosecutors were pursuing the case.

“We have suspected from the beginning, when we began to get information about how the events unfolded, that the shooting was entirely unjustified,” he said. “Now that we’ve seen the further evidence that’s contained and attached to the charges, there’s no question in our minds that this was an event that could have been — and should have been — prevented.”

In May, the Sykap family filed a wrongful-death lawsuit against the city of Honolulu and the officers who were involved in the shooting.

The head of the State of Hawaii Organization of Police Officers did not immediately respond to a request for comment on Wednesday, but in a statement to The Associated Press on Tuesday, he voiced support for the officers.

“We continue to trust the process and will continue to stand by our officers,” said Malcolm Lutu, the union’s president.