AMERICUS, Ga.— Over the past three decades, as the state around him turned ever more resolutely Republican, W. McCall Calhoun Jr. remained an outspoken and unwavering liberal. He gave money to Democrats, ran for office as a Democrat and zealously championed Democratic policies in social circles that were far from sympathetic. If friends admitted they voted for Donald J. Trump, his reaction could be blistering.

“He was hard core, there’s no doubt about it,” said Dr. Michael Busman, a physician who has known Mr. Calhoun for years. “He wouldn’t even want to talk to you if you were Republican.”

But last year, as the progressive movement in Georgia was on the cusp of historic electoral triumph, Mr. Calhoun, a small-town lawyer whose family had long roots in the state, suddenly abandoned the Democrats. And not only that, he pledged to kill them.

“I have tons of ammo,” Mr. Calhoun wrote on Twitter three months before storming the U.S. Capitol with a pro-Trump mob. “Gonna use it too — at the range and on racist democrat communists. So make my day.”

The sudden conversion of Mr. Calhoun, who is now in federal custody, was baffling to many who knew him. Indeed, Mr. Calhoun’s story seemed a walking embodiment of Georgia’s contradictions: a state where a rising multiracial coalition of voters sent two Democrats — a Black preacher and a Jewish millennial — to the Senate in January, but where thousands of voters also elected Representative Marjorie Taylor Greene, vanguard of an incendiary brand of hard-right politics.

​Some Black residents of Americus, Mr. Calhoun’s hometown, were not shocked that a person so worldly could end up doing something like this. “The Jekyll and Hyde effect,” said the Rev. Mathis Kearse Wright Jr., the head of the local N.A.A.C.P. chapter. He knew Mr. Calhoun, who gave donations and regularly bought tickets to the group’s annual banquet. But Rev. Wright suggested that the racism deep at the root of Georgia’s history was still very much alive, even if white people, including some of those who saw themselves as progressive, did not want to admit it. “What President Trump did was allow it to bud and to grow,” he said. “A lot of people who had been suppressing it no longer felt that they had to suppress it.”

Before it fell away, Mr. Calhoun’s white progressivism had a homegrown flavor, steeped in Georgia’s history, countercultural currents and higher education system. He preached criminal justice reform and broadcast his support for Hillary Clinton.

Then came his abrupt turn, and a headlong descent into some of the darkest places in Georgia history. He peppered his social media posts with racial slurs, referring to Vice President Kamala Harris as a “fake negro.” He saluted the Confederacy, and he seemed to thirst for civil war.

He was not an unlettered man: In his years at school, Mr. Calhoun had written a master’s thesis on the historiography of Napoleon’s peninsular war and had attended a law seminar in Belgium. His profile — a well-educated, white-collar white man — matched that of some of the other Georgians who stormed the U.S. Capitol on Jan. 6, radicals of the establishment from a state in the grips of a political identity crisis.

The crowd that came from Georgia included a 53-year-old investment portfolio manager and a 65-year-old accountant. It included Cleveland Grover Meredith Jr., 51, a successful business owner who graduated from an elite Atlanta prep school, who was arrested in Washington the day after the riot with guns, hundreds of rounds of ammunition and a phone with his text messages about “putting a bullet” into Speaker Nancy Pelosi’s head.

Mr. Calhoun, 58, was the grandson of a lawyer and the son of a doctor, in a family that counts among its ancestors John C. Calhoun, the 19th-century pro-slavery politician. He grew up in Americus, where he attended Southland Academy, one of the many private all-white schools that opened across the South during the wave of public school integration. 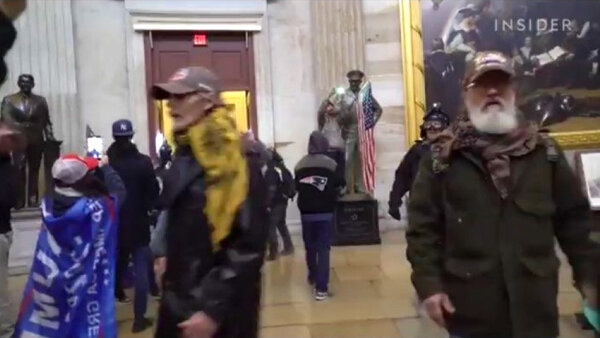 At the University of Georgia, in Athens, Mr. Calhoun found his place in the Greek system, a largely segregated world of columned fraternity and sorority houses, parties and privilege. His fraternity, Phi Delta Theta, was the longest continually active fraternity at the university, and boasted of producing two Georgia governors.

But he also found a place amid the distinctly Southern college-town bohemia that had emerged in the 1980s in Athens, which had become an incubator for idiosyncratic rock bands like the B-52s and R.E.M. While not always overtly political, the scene introduced a generation of white Southerners to new ways of thinking and living. Mr. Calhoun was one of them, and he became a mainstay in Athens as the bass player for a group called Fashion Battery, and later, the Kilkenny Cats.

Later he began a law career in Americus, an old Confederate cotton town and the seat of Sumter County, about 140 miles south of Atlanta. Sumter has for decades played an important role in liberal Georgia’s sense of possibility. A multiracial Christian commune, Koinonia Farm, was founded there in the 1940s. Jimmy Carter lives in the tiny town of Plains, and the nonprofit Habitat for Humanity, founded by a Koinonia family, is headquartered in Americus.

Black residents in Sumter make up a reliable Democratic base, while whites are often divided, as one local put it, between liberal “come heres,” like Habitat employees, and conservative, locally raised, “been heres.”

Mr. Calhoun was a liberal “been here,” and he did not hide it. He ran, unsuccessfully, as a Democrat for district attorney. In 2004, he wrote a letter to The Atlanta Journal Constitution, praising a Black state Supreme Court justice in a tight re-election race and criticizing her opponent for running a “rather contemptuous and somewhat racist campaign.” People had no doubt about his politics.

“He would oftentimes talk about how our judicial system is too hard on people,” said Bruce Harkness, a lawyer in the mountains of northern Georgia where Mr. Calhoun spent a few years as a public defender. “He didn’t believe that drug offenses should be so criminalized.”

Mr. Calhoun was now moving with a neo-hippie crowd, playing in jam bands and going to festivals. When he returned to private practice, he was an all-purpose small town lawyer, and many of his clients had little income. From one, he accepted payment in tie-dye garments.

After the 2016 election, an old friend, Bob Fortin, remembers Mr. Calhoun excoriating him for voting for Mr. Trump. “He cussed me out in his kitchen,” said Mr. Fortin, who said he later regretted his vote. “He made me feel like a complete ass.”

Then, about a year ago, came Mr. Calhoun’s abrupt political shift. “I thought his Facebook was hacked,” Mr. Fortin said.

The trigger appeared to be gun control. Mr. Calhoun had not always been obsessed with guns, friends said. But in the fall of 2019, some Democratic politicians began talking of ambitious new gun restrictions and it seemed to flip a switch. Mr. Calhoun said as much himself.

“I was a Democrat for 30 years,” he wrote in a recent social media post. The new gun control proposals changed that, he said. “I was called a white supremacist and a racist for defending the 2A,” he continued, using a shorthand for the Second Amendment. Given all that he had done as a lawyer for “justice,” he said, “that hurt my feelings a little. That’s when I became a Trump supporter.”