In more normal times, Scott Green , a lifelong civil rights activist, may have had a ceremonious funeral followed by a burial in a military cemetery in Little Rock, Ark.

Mr. Green was one of the students known as the Lost Class of 1959 at Central High School, where a battle over forced desegregation in Little Rock helped propel the civil rights movement. After he died in April at age 76 with symptoms of Covid-19 in Manhattan, former President Bill Clinton called Mr. Green’s family to extend his condolences.

At the time, New York City was experiencing its deadliest stretch of the pandemic; hundreds of deaths per day from the coronavirus were overwhelming city morgues and hospitals, and causing weeks of backlogs at funeral homes and cemeteries. Mr. Green’s relatives had difficulty finding a funeral director available to recover his body from the city morgue, and could not give him the funeral they had wanted.

With a mixture of reluctance and relief, the Green family decided on a public burial on Hart Island, which would inter his body in one of the mass, unmarked graves dug by city jail inmates and overseen by armed guards. It was a last resort, an expedient, if perfunctory, way to bury loved ones instead of having their bodies languish in refrigerated trucks with scores of others.

“We couldn’t even get a time for a cremation,” said Mr. Green’s older brother, Ernest Green, who was part of the Little Rock Nine, the group of students who helped desegregate the all-white Central High School in 1957. “We didn’t have any options and we needed to be realistic about what our options were. And it was obviously something that needed to be resolved.”

Shortly before the pandemic, city officials were exploring the possibility of ending interments on the island and shipping bodies out of the city for public burial. But the pandemic showed the necessity of Hart Island, reprising the crucial role it played during other health crises, such as the Spanish Flu in 1918 and the AIDS crisis.

The city buried 2,334 adults on the island in 2020 compared with 846 adults in 2019, making burials last year on the island the busiest since the AIDS epidemic.

City officials are now actively assessing the viability of continuing public burials on the island long-term and are looking into the prospect of building a crematory and cold storage center there, to ease the need for more burial space on the island. Opened in 1869, Hart Island is the largest public cemetery in the country.

Burials there have long remained an obscure city service shrouded in shame, partly because of the burial methods — bodies are stacked by the hundreds in long muddy trenches.

Harrowing photos of caskets being loaded into mass graves became some of the most unsettling images of the pandemic, drawing attention to Hart Island and what many people saw as its indignity. With the virus spreading on Rikers Island, the city abruptly replaced the inmate laborers with contract workers for burials — a change that was not supposed to go into effect until July 2021 under a 2019 law . 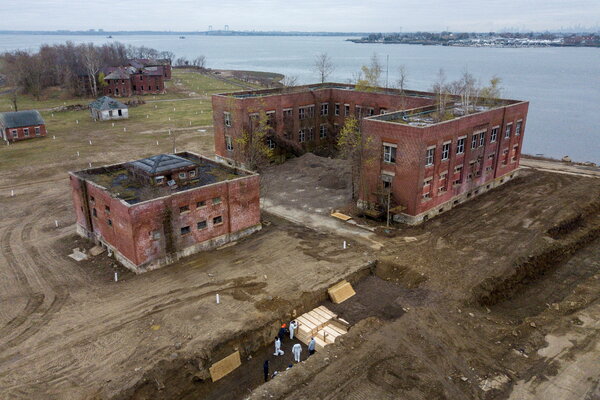 But in early April, the virus infected the team of correction officer overseeing the burials on the island, according to a Time magazine article.

Under the new law, the city’s Department of Parks and Recreation will take control of the operation on Hart Island from the Department of Correction. But when the correction department brought in 40 contractors in April to take over digging duties from the inmates, most workers turned down the job before ever starting, after seeing the task involved. The city is preparing for the handoff from the correction department. The city’s Human Resources Administration, which in July will formally begin overseeing burials on the island, put out a request this month for contractors who are willing to take over grave-digging work. (The mayor’s office did not respond to questions about the future of the island and the burial ground.)

Advocates hope these changes can usher in a more humane approach toward burial arrangements and limitations on grave site visits, and help lift the longtime stigma of the island as a pitiable burial spot for homeless and poor New Yorkers.

“The pandemic sped up the changes and made them more of a focus of the city,” said Melinda Hunt, founder of the Hart Island Project, a nonprofit group that has pushed for more public access and awareness regarding the island.

“They, all of a sudden, realized why we have public burials there,” she said of city officials. “It’s not some Dickensian thing. It’s an orderly and secure system of burials that works, especially when you have deaths on the scale of an epidemic.”

Ariane Didisheim, a former professional figure skater who died at her home in April, did not see the need for a formal burial, said Raoul Didisheim, her son.

So facing exorbitant burial costs and backlogged funeral homes, Mr. Didisheim said he decided that Hart Island was best. He said he hoped to see Hart Island open up to the public as a recreational space, which would be a step forward in making it a brighter setting that could provide New Yorkers with “a connection to the circle of life.”

But not everyone agrees with continuing burials on Hart Island. Sandra Yon, whose mother, Ivory M. Pinkney, died at age 76 in April in a Brooklyn rehabilitation center, said she agreed to a Hart Island burial because it was free.

“I didn’t have any money,” she said, “and, at the time, I was devastated and all over the place.”

The more information that Ms. Yon learned online about Hart Island, the more she regretted that it was her mother’s final resting place. “It doesn’t sit well with me, because, from what I hear, it’s just a massive grave,” she said.

City Councilman Mark Gjonaj, whose Bronx district encompasses Hart Island, said he voted against the 2019 legislation that transferred the island’s oversight to the Parks Department because the legislation failed to address how respect for the dead would be maintained, among other concerns.

“It’s sacred ground,” he said. “The city owes the families and surrounding community more answers and clarity on their intentions for the site.”

Before the pandemic, roughly 20 adults were buried per week on the island. In April, when Mr. Green died, the city buried 415 adults, nearly six times the 70 who were buried there in April 2019.

The backlog of bodies was so intense that the city — which can typically hold bodies for months while searching for relatives — told funeral directors in early April they had only two weeks to claim bodies from the morgue.