During the week, Nate Brakeley works as a data analyst. But on the weekends, he competes with Rugby United New York, the city’s first professional major league rugby franchise, now in its fourth season.

During the pandemic, the league centralized operations, which used to span the five boroughs, in Jersey City. Mr. Brakeley, 31, and his fiancée, Emily Muhl, 39, followed, moving from the Chelsea neighborhood in Manhattan to a second-floor walk-up across the river.

“Normally, guys are all over the city taking public transit to practice,” Mr. Brakeley said. “We moved operations to here because we could more effectively bubble ourselves from the general population.” For the most part, the move worked. Practice resumed this January, and in March the team played its first game of the season, which concludes this month. 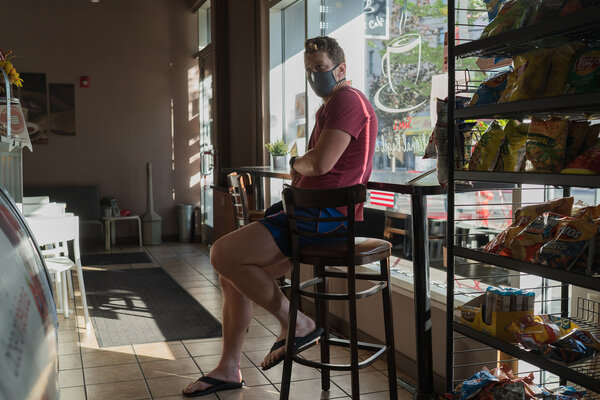 BAGEL BREAKFAST I’m up at 8 a.m., which is late because I’m up at 6 during the week. Whoever is up first makes coffee, which is usually Emily. I roll out of bed and get an egg, sausage and cheese on an everything bagel from International Bagel and Cafe, which is around the corner. Emily does intermittent fasting so she doesn’t eat breakfast. I’ll eat while I watch a rugby match, usually that’s happening in the United Kingdom. I like to watch other teams to see how they play and learn their strategies. Emily might go to a spin class.

GYM DAY If I don’t have a game, I go to the gym for two hours and do the bike or rowing machine. Then I’ll do squats with weights on my back. On a good day I can lift 400 pounds. That’s followed by leg exercises. Emily does all this with me. She lifts weights and uses the machines. It’s why we started dating. She said she would come to the gym with me. That’s how she got me.

GAME DAY If I have a game, I’m in our silver Subaru Forester, which we bought while quarantining in New Hampshire, by noon. This year, for all of our home games, we meet at our practice field beforehand. Then the 30 of us get on a bus so we can arrive at the stadium together. We were playing at Cochrane Stadium in Jersey City, but for this last home game, we’re at St. John’s University, in Queens. It’s a higher quality field. We’ve been nomads this season. I don’t mind. I’m happy to play wherever, whenever. Rugby is a huge part of my life. I get a lot of validation here.

PREP I head into the locker room, unpack my stuff, which consists of cleats (size 16), shorts and a change of clothes. Then I get my uniform jersey, which are communal. It’s washed, that’s as much as I can ask for. The number is by the position you play. I’m usually 4 or 5. There’s humility in not having your own name blasted on the back. I tape my wrists, followed by my ears — to the side of my head — so I don’t get cauliflower ear, which is what happens if you get a shot to the ear. It fills up with fluid and hardens so your ear looks like a head of cauliflower.

WARM UP By 1:30 we’re all out on the field. I do stretching, sprints and pass the ball around. Then team warm-ups start. The opposing team is doing the same. Rugby is a small community. There are only 12 teams in our professional league so I have friends on every team. The fans will filter in. They started coming back in late April. It’s all outdoors so no one is wearing masks. It’s great to have them cheering us on. Before the game starts, we come together in the locker room. There’s no pump-up speech from the coach, but there’s one from the captain. We do a team cheer. Then I take 30 seconds to calm myself.

PLAY We play at 2. The game is two 40-minute halves, with a 10-minute break. Only 15 of us play at once. We sing the national anthem, then we start. I usually remember kickoff; the rest is vivid snapshots of things that went well or very badly that stick with me, connected by a blur. By 4 we’re shaking hands with the other team. We applaud the fans for coming out. We wouldn’t be a team without the people who came to see us play.

KING OF THE HILL We wander back into the locker room around 4:20 and debrief with the coach, which, depending on how the game went, will have a different intonation. Then players say their bit. If we won we sing some bastardized version of “New York, New York.” It’s about three verses long but good for yelling.

TEAM MEAL I shower, change and meet up with Emily. We used to go to dinner in Coney Island. Now because of Covid, we are not allowed to have a post-match meal with the other team or with fans. So we gather at Cast Iron Lofts in Jersey City, which is where a lot of team members live. The team will organize a big pasta and chicken dinner, which we all eat with our significant others and friends on the roof. Post-match socializing is a big part of rugby culture.

LOCAL HAUNTS If I don’t have a game, Emily and I go out for dinner around 6. We have only been here for three months, so it doesn’t feel like home yet. But we are less cramped. We’ve found two places we like: The Boil, which is a Cajun crawfish spot, and Left Bank Burger Bar.

SETTLING IN Game or no game, we’re home around 8:30. We will watch TV or a movie. We recently watched all of Ozark, which was a good, dark, gripping show. And The Nevers. It’s Victorian England meets sci-fi so that was a good, interesting crossover show. By 10:30 I’m in bed, exhausted and sore from being beaten up during the day. The minute I’m horizontal, I’m out.