MIAMI — The recruitment of the sham candidate began with a Facebook message at around 4 a.m. on May 15, 2020. “Call me,” a Florida legislator turned lobbyist wrote to an old friend. “I have a question for you.”

Later that day, former State Senator Frank Artiles, a Republican, asked Alexis Pedro Rodriguez by phone whether he still owned a home in the suburban Miami village of Palmetto Bay. Because in that case, Mr. Artiles wanted something else: to put his friend’s property and last name to use in the upcoming election.

The incumbent Democrat, State Senator José Javier Rodríguez, was on the ballot. And Mr. Artiles, a crafty political operator with a dubious reputation, had a plan: to plant his friend as a candidate and siphon off votes that could defeat Senator Rodríguez.

The plan worked, setting off one of Florida’s most brazen electoral scandals in years — even by the heady standards of a state that has long been fertile ground for political scammers. What is still uncertain is how broad the scandal is, whether it had touched other races and whether it was part of an organized effort by Republicans or an interest group to sway legislative races.

Mr. Rodriguez, a machine-parts dealer who had been struggling financially, agreed to help Mr. Artiles, who promised him $50,000 in return. He switched from Republican to no party affiliation and qualified for the ballot as Alex Rodriguez. He did not disclose that he actually lived far from the district, in Boca Raton, or that the money for his candidacy came from Mr. Artiles.

In November, Senator Rodríguez, an effective legislator who had crusaded for Florida to face the climate change crisis, lost to the Republican challenger, Ileana Garcia, by a mere 32 votes out of more than 215,000 that had been cast. Alex Rodriguez had received 6,382 votes and played the spoiler.

It was a devastating loss for Florida Democrats in a year of Republican successes in the state. It was also the result of criminal behavior, prosecutors say.

On Thursday, Mr. Artiles, 47, and Mr. Rodriguez, 55, turned themselves in for arrest. They were each charged with three third-degree felony charges related to violating campaign finance law, including for conspiracy to make campaign contributions in excess of legal limits, making those excess contributions and false swearing in connection to an election.

Mr. Artiles declined to comment to a scrum of reporters who chased him out of jail on Thursday once he posted a $5,000 bond. “This will be decided in the courts, thank you,” he said.

His lawyer, Greg Chonillo, said in a statement on Friday that his client, whose home was raided by investigators on Wednesday, had been cooperative with prosecutors “throughout the course of this investigation.”

“We will be investigating this matter fully and zealously, representing our client in court against these charges,” Mr. Chonillo said. 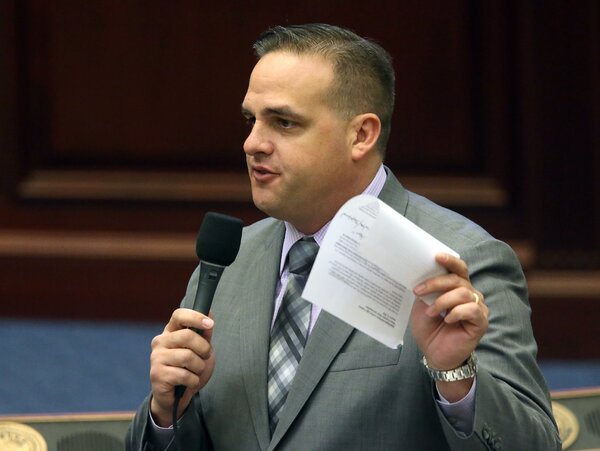 The story of how Mr. Artiles plotted the scheme, according to the arrest documents, is a classic South Florida racket complete with the sale of a nonexistent Range Rover and wads of cash stored in a home safe.

But it leaves unanswered the questions of where the money for the scheme came from — the Republican Senate president said the party had nothing to do with it — and whether the funds were tied to secretive dark money that oozed through two other State Senate races last year. Republicans have controlled the state government for more than two decades.

On Friday, Democrats called for campaign finance reform — and for the resignation of Ms. Garcia so that a new election could be held. “Her victory is clearly tainted,” said Manny Diaz, chairman of the Florida Democratic Party.

Prosecutors said they had found no ties between her and the scheme by Mr. Artiles and Mr. Rodriguez. On Friday, State Senator Wilton Simpson, the state’s Senate president, issued a joint statement with Ms. Garcia saying that they “support the ongoing efforts of law enforcement.”

“Senator Garcia has the full support of President Simpson as she continues to serve her constituents,” the statement said.

South Florida has an ignominious history of political and electoral shenanigans, both high profile — fraud that was so rampant in a Miami mayoral election in 1997 that a judge threw out the results — and low rent, such as small-time brokers getting caught unlawfully harvesting absentee ballots.

In 2012, former Representative David Rivera, a Republican, was involved in a shadow campaign to try to hurt the electoral chances of his Democratic rival, Joe Garcia. The recruited candidate and Mr. Rivera’s ex-girlfriend, who acted as a go-between, wound up in jail. Mr. Rivera, who was never charged, last month was ordered to pay the Federal Election Commission a $456,000 fine.

On Thursday, Katherine Fernández Rundle, the state attorney for Miami-Dade County, a Democrat, noted that recruiting a sham candidate to deliberately influence an election was not illegal, unless the candidate was also secretly financed.

“Is it an attack on our democracy? Is it a dirty political trick?” she said. “Absolutely.”

At the center of the latest scandal is Mr. Artiles (pronounced are-TEE-less), who before his arrest this week was perhaps best known in Tallahassee, the state’s capital, for resigning from the Senate in 2017, after he cursed at and used a racist slur before a group of Black lawmakers. His political committee had spent money on “consultants” who were models from Hooters and Playboy without any campaign experience. He once denied punching a college student at a bar near the Capitol.

His involvement in recruiting the sham candidate for the Senate District 37 race last year became public in December, when The Miami Herald reported that Mr. Artiles had boasted about planting Mr. Rodriguez on the ballot to a crowd at an election night party held at an Irish pub in Seminole County. “That is me, that was all me,” The Herald quoted Mr. Artiles as saying, citing an anonymous source who was present.

The furor around Mr. Rodriguez’s suspicious candidacy had begun after Election Day, when the results separating Senator Rodríguez and Ms. Garcia, a founder of the group Latinas for Trump, were so tight that they led to a manual recount.

Local reporters in Tallahassee, Orlando and Miami found that Mr. Rodriguez along with two mysterious under-the-radar candidates in two other Senate races, one in the Miami area and one in Seminole County, were all likely plants. (Results in the other races were not close.)

Politico Florida tied the three candidates to dark money from two political committees that had sent hundreds of thousands of dollars’ worth of attack fliers to voters during the campaign. The only donor reported was an entity that listed a UPS box in Atlanta as its mailing address. The committees amended their financial reports after Election Day, changing the source of the money to a different donor, this time in Colorado.

But where Mr. Artiles got so much cash is still unknown.

“Frank Artiles is not a lone wolf,” said William R. Barzee, a lawyer for Mr. Rodriguez. “Over half a million dollars was spent by political operatives working in the shadows to prop up ghost candidates in three separate Senate races, all in one cycle. This was a well-thought-out, calculated and coordinated plan to steal Senate seats throughout Florida.”

The “greatest beneficiary of these actions,” Mr. Barzee added, “is the Republican Party of Florida.”

Mr. Simpson, the Senate president who ran the Republican Senate campaigns in 2020, has said that he had nothing to do with the effort. “I think we don’t have all the facts,” he told reporters in Tallahassee on Thursday. “We’re learning what you’re learning as you report it.”

“I hope this is just the tip of the iceberg,” said former State Representative Juan-Carlos Planas, known as J.C., who was Senator Rodríguez’s lawyer during the recount and who himself once fought a candidate who had been planted against him: his second cousin, who appeared on the Republican primary ballot as Juan E. “J.P.” Planas.

Senator Rodríguez, 42, lamented that weak enforcement mechanisms continue to allow questionable candidates to make it on the ballot.

“It’s a shame that it has to reach this level of criminality for there to be any kind of consequence, because this is not the first time these types of schemes have been put together,” he said. “But this is the Wild West here in Florida.”