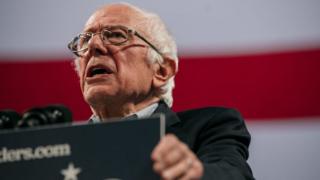 Bernie Sanders, a 78-year-old senator from Vermont, is a front-runner in the Democratic race for president. The registered independent has performed well in the first states to vote. So who is he?

Senator Bernie Sanders likes beating the odds. His first political victory, running in 1981 for mayor of Burlington, Vermont, pitted him against the Democratic machine that had controlled the city for decades.

Mr Sanders won – by a margin of 10 votes – but the political newcomer still faced formidable resistance from within the city government. On Vermont’s city council, 11 of 13 members opposed Mr Sanders and actively conspired against his agenda.

This same Democratic machine worked to thwart his re-election two years later, but Mr Sanders emerged triumphant – this time by more than 20 percentage points. The battle offered an early taste of Mr Sanders’ career, which has represented a nearly 40-year challenge to the political establishment.

Bouncing back from a bitter loss to former US First Lady and Secretary of State Hillary Clinton in 2016, Mr Sanders is running again for the top prize. This time around he’s suffered a heart-attack and fundraised more than $100m (£77m).

Here’s a look at who he is and what the self-proclaimed democratic socialist stands for.

Mr Sanders was born in Brooklyn, New York, to Jewish parents. He once said his humble upbringing in a tiny apartment made him class-conscious at an early age.

He attended the University of Chicago, and in the 1960s and 1970s participated in anti-war and civil rights activism, like the 1963 March on Washington.

He applied for conscientious objector status during the Vietnam War, though he was too old to be drafted by the time his application was rejected.

Mr Sanders entered politics in 1971 running for a US Senate seat in Vermont as a Liberty Union candidate, a party with anti-war and socialist roots. He lost that race, along with a couple of campaigns to become governor.

His first major political success came when he was elected mayor of Burlington, Vermont, in 1980, beating a six-term incumbent. He went on to serve four terms.

It was during this time that he met and married his current wife, Jane O’Meara, the former president of Burlington College once described as a “key adviser” in his political career. Combined, they have four children from previous relationships.

He was first elected to the US House of Representatives in 1990, the first independent to do so in 40 years. He served there until he ran for and won a seat in the Senate in 2007. During that campaign, a younger Barack Obama stumped for him.

Since first arriving in Washington, Mr Sanders has assailed Republican and Democratic politicians alike as being beholden to wealthy donors and industries – for this he was sometimes dismissed as a gadfly. He is the longest-serving independent in congressional history.

In 2010, he famously stood and spoke for eight-and-a-half hours to attempt to block the extension of Bush-era tax policies that Mr Sanders said benefited the rich and worsened the nation’s income gap.

He became the chairman of the Senate Committee on Veterans’ Affairs in 2013 and helped negotiate bipartisan solutions when former soldiers complained of dangerously delayed and inadequate care around the country. He was a staunch opponent of the Iraq War.

He is fond of praising the social policies of Nordic countries, like universal healthcare and paid leave for new parents. He wants to make college free and erase all student debt.

Mr Sanders has been attacked for his voting record on gun control, including his opposition to various forms of the Brady Bill, which required background checks and waiting periods for gun purchasers. He says his record merely reflects the priorities of his Vermont constituents.

In 2016, during his last presidential run, Mr Sanders jumped into the Democratic race as a long-shot candidate, squaring off against establishment favourite Hillary Clinton. But once again, Mr Sanders confounded expectations: setting fundraising records and, for a time, casting doubt on the once-seemingly inevitable nomination of Mrs Clinton.

Now, anti-establishment tone intact, Mr Sanders is running on a characteristically progressive platform, featuring Medicare for all, a $15 minimum wage, and tuition-free public college. He is quick to note that many items on his agenda – once deemed radical – are now embraced by Democrats.

Still, some Democratic leaders remain sceptical that Mr Sanders could win their party’s nomination, a degree of doubt that seems to galvanize him.

In October, his candidacy appeared in peril after Mr Sanders suffered a minor heart attack and was forced to suspend his campaign. The episode reignited criticism that Mr Sanders is too old to compete for the presidency. The Vermont senator – who will be 79 by election day – would be the oldest US president in history.

But within weeks he was back, bolstered by an endorsement from Alexandria Ocasio-Cortez, the party’s liberal darling and youngest ever US congresswoman.

Mr Sanders is an unapologetic curmudgeon – he shrugged off a recent claim by Mrs Clinton that nobody likes him, saying: “On a good day, my wife likes me.” And few other candidates could get away with telling a voter’s crying baby to “keep that down”. But Mr Sanders’ supporters say it goes to show he is authentic.

He now draws crowds in the tens of thousands, as he makes the case that the 2020 election will be won because of his principle and policy, not in spite of it. And if the outsider candidate is able to clinch victory in Iowa, he may be poised to beat the odds once again.

Who is Sanders up against?