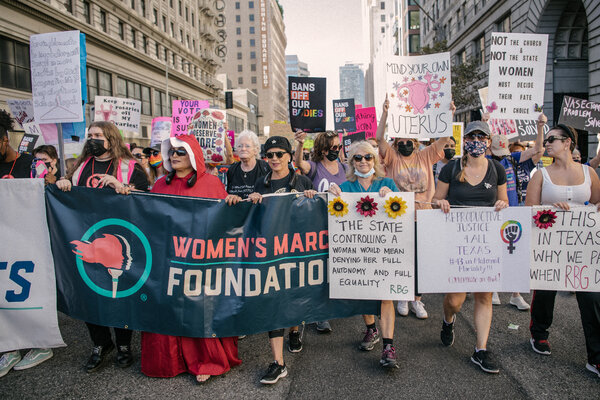 The hundreds of women’s marches staged across the country over the weekend had a clear rallying cry: Don’t let America go the way of Texas.

One Long Beach demonstrator held a sign that read, “Coronavirus has more reproductive rights in Texas than women do!”

A near-total ban on abortions enacted last month in Texas appears to have energized abortion supporters nationwide, even if participation in the marches remained below previous years’.

But the situation in our state is far different from the one in Texas and in much of the rest of the nation.

California is home to more than a quarter of the nation’s abortion facilities, and many have been treating patients from Texas since the new law took effect. California doctors, meanwhile, have been flying out of state to provide abortions to Texan women.

The latest polling from the Public Policy Institute of California finds that 77 percent of adults here want Roe v. Wade, the Supreme Court decision that established a constitutional right to abortions, to remain in place. That’s nearly 20 percentage points higher than the share in recent national surveys.

That widespread support for abortion has put California in a somewhat unique position within the current abortion landscape. If Roe v. Wade were to be overturned, California law would keep abortions here legal, which wouldn’t be the case in most states.

Still, there is one area where California abortion trends align with the nation: unchanging public views over time.

In the Public Policy Institute poll from July of this year, 21 percent of Californian adults wanted Roe v. Wade overturned, which is nearly unchanged from the 22 percent who shared that belief in 2006.

The same pattern has been seen nationwide, with attitudes toward abortion fluctuating slightly from year to year but remaining largely stable over decades, said Gregory A. Smith of the Pew Research Center.

“It’s a very different pattern for those two kind of core cultural issues,” Smith told me.

That’s because younger Americans tend to be far more comfortable with same-sex marriage than older generations, while the generational gap in abortion views is much smaller.

This suggests that, even in California, the debate over abortion isn’t disappearing any time soon.

A federal judge on Friday heard arguments over the Texas abortion law.

With abortion largely banned in Texas, an Oklahoma clinic has been inundated.

Theranos trial: The fourth week of the fraud trial of Theranos founder Elizabeth Holmes lacked star power, but jurors got their most detailed look yet at how the company’s medical tests were plagued with inaccuracies.

Positive reinforcement: California may be the first state to try treatment that pays people not to use meth, KQED reports.

Offshore accounts: King Abdullah II of Jordan was accused of using shell companies to buy 15 properties, including in Malibu.

Oil spill: A pipeline failure off the coast of Orange County on Saturday caused at least 126,000 gallons of oil to spill into the Pacific Ocean, creating a 13-square-mile slick that continued to grow on Sunday.

Endangered wolf: An endangered gray wolf that traveled at least 1,000 miles from Oregon may still be alive and roaming in Ventura County, The Associated Press reports.

Clint Eastwood lawsuit: The actor won a $6.1 million lawsuit in a Los Angeles court against a company accused of suggesting that he endorsed their CBD products.

Yosemite landmark: A building originally used as a laundry by Chinese workers at Yosemite’s iconic Wawona Hotel has been restored and turned into an attraction recognizing Chinese Americans’ contributions to the early history of the park, The Associated Press reports.

Humboldt County park: Patrick’s Point State Park in Eureka will be renamed Sue-meg,” to honor the designation for the area long used by the Yurok people, North Coast Journal reports.

Explore the weird, winding waterways of the Sacramento-San Joaquin Delta.

The best movies and TV shows newly added to Amazon, HBO, Hulu and more in October.

When a Los Angeles author tweeted about a Royal Dansk cookie tin being repurposed as a sewing kit, he thought a few fellow Latinos might relate.

My Times colleague Priya Krishna writes: “The reincarnations have become part of the cultural discourse, as people realize that what they thought was a quirk of their particular community or generation is far more widespread.”

Thanks for starting your week with me. I’ll be back tomorrow. — Soumya

Briana Scalia contributed to California Today. You can reach the team at [email protected].