“When you run a business, you work seven days, Sundays included,” said Gherardo Guarducci, 51, the co-founder of the Sant Ambroeus Hospitality Group, which includes its flagship restaurant, Sant Ambroeus, on the Upper East Side, the upscale Italian spot Casa Lever in Midtown Manhattan and Felice, a wine bar and restaurant that has four locations (one of them is a bar/lounge) across the city. Originally from Prato, near Florence, Mr. Guarducci has been a New Yorker for more than 30 years. He lives in West Chelsea with his black Labrador, Lapo, 4. Two out of his four children, Camillo, 17, and Gaetano, 23, live nearby while his daughter Ludovica, 21, lives in Washington, D.C. and Giulia, 25, lives in London.

CENTERING The earliest that I wake up on a Sunday is 8. I’m usually a 6 a.m. riser so this is sleeping in for me. I relish the extra rest. Before getting out of bed, I do a 20 minute Vedic meditation. It’s something that I’ve been doing daily for five years and keeps me centered in my life, both personally and professionally. 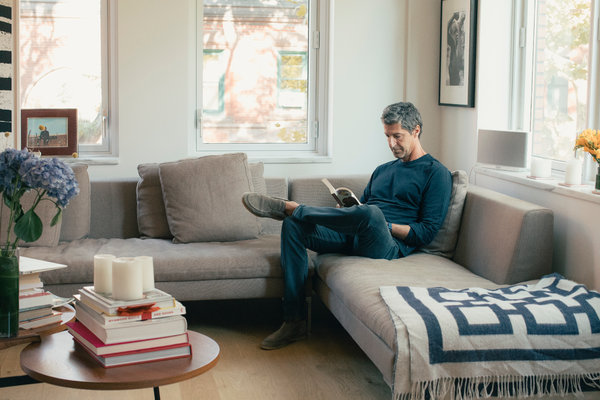 RIVER RUN After meditating, I take Lapo out for a short walk and then head out for a four to six mile run along the Hudson River. Running is another form of mediation for me, and I listen to all sorts of music while I’m doing it, Italian folk included.

MOKA MORNING I make coffee in a Moka pot on my stovetop. It’s how I grew up having it in Italy, and the sound and the scent that comes from the Moka is very familial to me. The coffee has this distinctive taste that’s somewhere between an espresso and an American coffee, and I have four cups. Once I’ve gotten some caffeine in, I eat unsalted raw almonds and some blueberries for breakfast.

READ I’ll settle on the couch and read the editorial section of The New York Times. Then, I try to read a few pages of the book I’m in the middle of. I read some sort of novel or nonfiction every day. Right now, it’s “Love in the Time of Cholera,” which I first read when I was 20.

AN ITALIAN TRADITION Right after I’m done reading, I get cooking. A hearty and delicious lunch is a tradition for Italians, and it’s one that I’ve stuck to. I gather family and friends at my place and do all the cooking myself. Usually, that means poaching a whole wild caught fish like turbot or bass in a water bath with carrots, potatoes, celery and parsley. It’s a way of preparing the fish that keeps it super moist. I’ll also make a pasta with tuna and capers and some steamed vegetables like string beans or zucchini. There’s always great olive oil and salt to accompany the spread.

GATHERING Camillo and Gaetano come over for lunch, and Ludovica does, too, when she’s in town. I’m also friendly with my ex-wife, Ginevera, so sometimes she joins the group and so do friends that I’ve gathered over the years in New York. There are usually seven or eight of us, and we sit around my dining table and enjoy our time together. We’ll talk about our families and the state of Italian politics and soccer. When we’re done eating, I’ll put out a selection of gelatos and sorbets from Sant Ambroeus. The best part is that everyone helps me clean up so I’m not stuck doing the dishes alone.

IN THE FIELD Every Sunday, I’ll stop by at five or six of my restaurants. I’ll talk to the managers, the chefs, the baristas and the guests. I also make it a point to try some of the dishes. We have set menus but also have many seasonal dishes so there’s always something new to try. I’m with either my co-founder, Dimitri Pauli, or our creative director, Alireza Niroomand. The restaurants, especially Sant Ambroeus, which started in New York in 1982, have lots of regulars, and I’ve become friendly with many of them over the years.

BACK TO THE RIVER By the time I’m home, it’s around 7, and Lapo is ready for some attention. I take him out for a long walk along the Hudson River. He loves being outside, and we’re out for at least an hour.

ALWAYS AT WORK My Sunday dinner spot is Sant Ambroeus in the West Village, which is close to where I live. I always get something different and usually go for one of the specials. I’ll have a glass of red wine to go along with the food.

SOFT LANDING Back at home, I get into bed right away and pick up my book again. It’s a futile effort because before I know it, I’m fast sleep. Lapo sleeps at the end of my bed with me.