Weather: A warm, foggy morning gives way to rain in the afternoon, then the temperature begins dropping sharply until it starts snowing overnight. 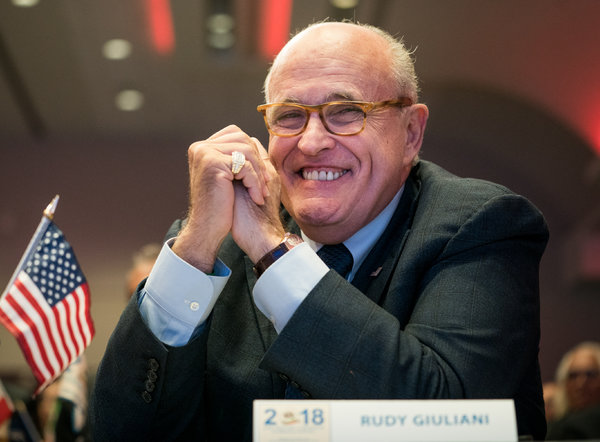 Democrats have described him as an enabler of abuse of presidential powers. Republicans have countered that he was providing legitimate advocacy for President Trump.

Either way, the impeachment hearings have made clear that understanding Rudy Giuliani — the crime-fighting Republican that New York City elected mayor twice — helps to explain how Mr. Trump operates.

My colleague Jim Dwyer, who has covered Mr. Giuliani for decades, co-wrote a recent article detailing how Mr. Giuliani led Mr. Trump to the brink of impeachment.

Below is a lightly edited interview with Mr. Dwyer.

Has he always been the same person?

It doesn’t seem to me that he has changed. You can find some quotes from him saying he’s the same person as he always was.

What characteristics has Mr. Giuliani exhibited in the 35 years you’ve covered him?

He thinks he can do no wrong, and he wants to be in the spotlight. He was the first federal prosecutor who really put himself on television. He never missed a television appearance if he could manage it.

How did being a surrogate for Mr. Trump help Mr. Giuliani get back into the spotlight?

After 2012, he was on the outskirts of national politics. Then, in the 2016 race, the Trump campaign couldn’t find anyone to defend them after the “Access Hollywood” tape came out, in which Mr. Trump made vulgar comments about women.

Mr. Giuliani did. That helped forge a new closeness with Mr. Trump.

I don’t think being Donald Trump’s — what’s a polite word for it — being Mr. Trump’s man Friday is going to help him politically in New York.

How does Mr. Giuliani feel about New York?

He travels a lot. (He was in Budapest and Kyiv last week.)

He has fewer personal connections to New York City than he used to. Some of his former City Hall aides are still around. But his son works in Washington. His daughter lives in California. He’s in the midst of a divorce from his third wife. (They shared a co-op on the Upper East Side, a spacious home in the Hamptons and other properties.)

The offices of his business are fairly modest. When he’s in town, the Grand Savannah Cigar Bar is practically his office.

Last year, he went to Yankee Stadium for his birthday and got heavily booed.

Reports of rape and sexual assault are up in parts of Queens. [Queens Daily Eagle]

A “pseudo newspaper” in Brooklyn features one lawmaker and a lot of ads. [Daily News]

Here are the eight million reasons to love New York. [The Cut]

The curator and writer Antwaun Sargent talks about his traveling exhibition and the future of art as part of the Black Icons of Art series at the Greene Space in Manhattan. 7 p.m. [$15]

The composer and soprano Judith Berkson performs with Ordinary Affects at Roulette in Brooklyn. 8 p.m. [$25]

And finally: Be kind, rewind

If you spy a blue-and-yellow Blockbuster store in SoHo this week, don’t scramble to return those epically overdue VHS tapes.

It’s a pop-up store at 13 Crosby Street that doesn’t offer rentals, but rather clothing and other items from Dumbgood, a lifestyle and streetwear brand.

The store, which opened last week, is free to visit from 11 a.m. to 7 p.m. daily through Sunday. It is decorated to resemble a real Blockbuster store, with film posters and videotapes on display.

Clothing and merchandise is available with Blockbuster themes, including “Be Kind Rewind” shirts, socks and totes.

There are also replicas of the Blockbuster rental boxes, along with smaller versions that serve as iPhone cases.

At Blockbuster’s peak, it had some 1,700 stores nationwide. The company filed for bankruptcy protection in 2010 after losing its customers to DVDs by mail, and then to online streaming.

Today one Blockbuster store remains — not in SoHo, but in Bend, Ore.

It’s Tuesday — do something retro.

I was on a crowded rush-hour train. A man pulled out a violin and started to play.

As we approached the next stop, the violinist pushed through the crowd to get to the next car. In the process, he nearly knocked over another man, who yelled out some choice words, ending with: “Like we need to listen to a sonata right now.”

There was a moment of silence. And then a voice spoke.