Weather: A chance of showers today with a high in the low 80s, turning to heavy rain this evening. 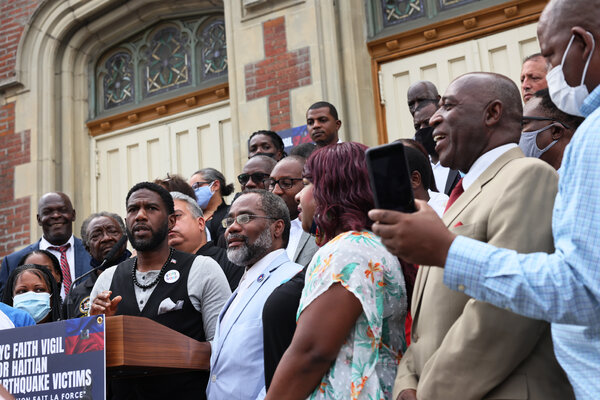 After Haiti was rocked by an earthquake over the weekend that killed nearly 2,000 people and then was pelted by a devastating tropical storm on Tuesday, New Yorkers began finding ways to send help.

The 7.2-magnitude earthquake struck western Haiti about 80 miles west of Port-au-Prince, the capital. It was stronger than the 7.0-magnitude earthquake that devastated the country in 2010. Doctors in Haiti have been stretched thin, while churches, the main source of aid for many Haitians, have also been destroyed.

“We must provide sustained support,” Jumaane Williams, the New York City public advocate, said in a statement. “In the past, people and nations have rushed to Haiti’s aid in the immediate moment of crisis, when the headlines are fresh and the cameras are present, only to abandon them in the aftermath and invite future crises.”

“We need to listen to the people on the ground,” he said, “and direct our support and resources so that it actually gets to them.”

The office of Councilwoman Farah Louis of Flatbush is hosting grieving and counseling sessions every day until Aug. 23 from 9 a.m. to 5 p.m. at the Haitian American Caucus training center at 495 Flatbush Ave. and the Evangelical Crusade Christian Church at 557 East 31st Street.

Donovan Richards Jr., the Queens borough president, will host a donation drive through Sept. 22 at Queens Borough Hall. Donations of supplies such as bottled water, nonperishable food and feminine hygiene products can be dropped off in a box in the lobby, open 24 hours a day, next to the security desk.

Donating to organizations working on the ground is recommended, rather than larger, more removed organizations such as the American Red Cross, which has been criticized for spending a high percentage of donations for Haiti’s 2010 earthquake relief on its own administrative costs and fund-raising.

A spokesman for Representative Yvette Clarke of Brooklyn, co-chair of the House Haiti Caucus, recommended donating supplies or volunteering with organizations vetted by the U.S. Agency for International Development, or to sites coordinated through Ms. Clarke’s office at the following Brooklyn locations: 231 Crown St., hosted by Medgar Evers College students; the first floor of 3021 Tilden Ave.; 2002 Mermaid Ave; and Assemblywoman Diana Richardson’s office at 330 Empire Blvd.

Decades of Accusations Set the Stage for R. Kelly’s Trial

Chris Cuomo of CNN Breaks Silence On His Brother’s Scandal

Black in Ballet: Coming Together After Trying to ‘Blend Into the Corps’

Five Queens women filed a lawsuit against a prominent Jackson Heights physician on charges that he sexually abused patients as young as 14 years old. [The City]

If Gov. Andrew Cuomo is convicted of multiple sexual misdemeanor counts in New York, he could potentially have to register as a sex offender. [Gothamist]

Menu prices in New York have skyrocketed, but it could be a good thing for the food industry. [Grub Street]

And finally: The challenges faced by New York’s Black homeowners

Kirkland Lynch, a 35-year-old Black renter, has a six-figure job with Google, a law degree from Harvard, sterling credit and a mortgage pre-approval. But after a six-month house hunt in Brooklyn, with six unsuccessful bids, he is close to giving up, disheartened by slights that verge on discrimination.

The Assassination of Haiti’s President