When the former Minneapolis police officer Derek Chauvin was found guilty this week of murdering George Floyd, the Democrats running for mayor of New York City, unsurprisingly, offered a unanimous chorus of support.

The two leading moderates in the race — Andrew Yang and Eric Adams — said that justice had been delivered, but that the verdict was only the first step toward real police accountability. Maya Wiley and Scott Stringer, two left-leaning candidates, seized the moment more overtly, appearing with other mayoral hopefuls at a rally at Barclays Center in Brooklyn, the site of many of last year’s Black Lives Matter protests.

“For once, we got a little bit of what we deserve — to be seen as people who deserve to breathe,” Ms. Wiley said to a crowd, within hours of the verdict.

But the candidates’ unanimity disappears when it comes to their approaches to running the New York Police Department, the nation’s largest. From the size of the police budget to disciplining rogue officers, the candidates offer starkly different visions.

In the wake of the Floyd case and other recent police killings, several candidates on the left, including Ms. Wiley and Mr. Stringer, have adopted the goals of the “defund the police” movement and want to significantly cut the police budget and divert resources into social services.

Another candidate, Dianne Morales, a former nonprofit executive who also attended the rally at Barclays, has embraced that movement more fully, calling for slashing the $6 billion budget in half and for eventually abolishing the police altogether. She and others argue that having fewer officers would reduce violent encounters with the police.

But Mr. Yang and Mr. Adams, more centrist candidates, strongly oppose reducing the police force and instead are calling for more expeditious decisions on police discipline and for improving accountability.

The debate is happening at a precarious moment for New York City, which is facing a troubling rise in gun violence: Last year was the city’s bloodiest in nearly a decade, and the number of shooting victims doubled to more than 1,500.

Shootings typically spike as the weather gets warmer, and the coming months will reveal whether the increase in violence over the last year was an aberration linked to the pandemic or the beginning of a worrisome trend.

If gun violence increases in May and June, in the weeks leading up to the June 22 primary that is likely to decide the city’s next mayor, it could have an outsize impact on the race. And it may help moderate candidates like Mr. Yang, a former presidential hopeful, and Mr. Adams, the Brooklyn borough president, who tied for first when voters were asked in a recent poll which candidate would best handle crime and public safety.

Mr. Adams, a Black former police captain, has positioned himself as a law-and-order candidate, saying that he is far better equipped than his rivals to make the city safer — a key step in its recovery from the pandemic.

“Public safety is the prerequisite to prosperity in this city,” Mr. Adams often repeats on the campaign trail. 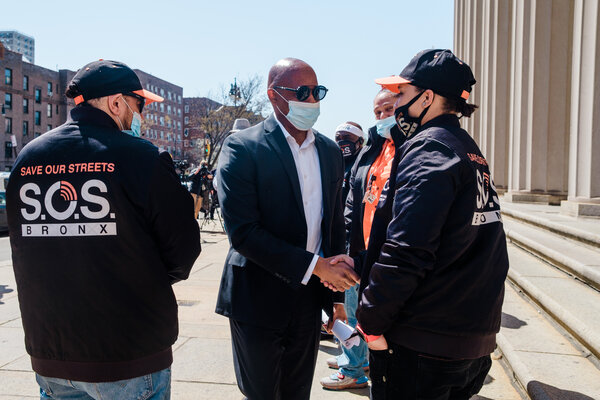 Chivona Renee Newsome, a co-founder of Black Lives Matter Greater New York, said she feared that Mr. Yang or Mr. Adams would not bring meaningful changes to the Police Department.

“I want a mayor who will listen,” she said, someone who was “not at the mercy of the N.Y.P.D.”

Calls for sweeping changes and a push to defund the police last summer led to laws banning chokeholds, limiting legal protections for officers facing lawsuits and opening police disciplinary records to the public. But elected officials did not make substantial cuts to the police budget or limit the types of situations officers respond to.

“We’re long past the time where people are going to be satisfied with cosmetic reforms or some attempts that really don’t get at the root question around reducing police violence and surveillance, increasing police accountability and transparency, and basically divesting from the N.Y.P.D.’s bloated budget and reinvesting that into our communities,” said Joo-Hyun Kang, the director of Communities United for Police Reform.

Left-wing activists are already applying a fresh round of pressure on the City Council and Mayor Bill de Blasio to reduce police spending in next year’s budget.

The death of Eric Garner in Staten Island in 2014 put a particular focus on holding officers accountable. Daniel Pantaleo, the officer who put Mr. Garner in a chokehold, was not criminally charged, and it took the city five years to fire him from the Police Department.

Mr. Garner’s mother, Gwen Carr, endorsed Raymond J. McGuire, a former Wall Street executive who has more moderate views on policing. Ms. Carr said the next mayor would only be able to tackle police reform if the city’s finances were stabilized. Mr. McGuire supports measures like increasing funding for the Civilian Complaint Review Board, which investigates accusations of police brutality and misconduct and makes disciplinary recommendations.

The next mayor and his or her police commissioner will have to resolve a host of thorny issues: how to discipline officers; whether the police should respond to calls involving the homeless and mental health issues; and how to address protests over police brutality. To put it more simply, in the post-Floyd era, what is the correct form and function of the police force and its 35,000 officers?

When it comes to firing an officer, Mr. Yang believes the police commissioner should continue to have final say; Mr. Adams argues it should be the mayor; and Mr. Stringer wants it to be the Civilian Complaint Review Board. Ms. Wiley has not given a clear answer.

The left-leaning candidates want to prevent police officers from responding to mental health emergencies and remove them from schools; Mr. Yang and Mr. Adams are reluctant to do so.

While Mr. Stringer, the city comptroller, and Ms. Wiley, a former counsel to Mr. de Blasio and former chair of the Civilian Complaint Review Board, have distanced themselves from the word “defund,” they both want to cut the police budget. Ms. Wiley has suggested cutting $1 billion per year. Mr. Stringer says he would trim at least $1 billion over four years and released a detailed plan to transfer 911 calls for issues involving homelessness and mental health to civilian crisis response teams.

Ms. Morales has called for the most sweeping changes to the criminal justice system: She wants to decriminalize all drug use, eliminate bail and build no new jails. Two other candidates — Kathryn Garcia, the city’s former sanitation commissioner, and Shaun Donovan, the former federal housing secretary — have more moderate positions that are nuanced enough that activists have created spreadsheets to keep track of where the candidates stand.

Mr. Yang and Mr. Adams have their own proposals, but activists are skeptical. Earlier this month, when Mr. Yang attended a bike vigil for Daunte Wright, a young man killed by the police in Minnesota, an organizer recognized him and grabbed a bullhorn.

Mr. Yang said in an interview that he decided to leave after that, and that he had spent more than an hour with the group biking from Barclays Center to Battery Park in Lower Manhattan.

“I wanted to join this event in order to really have a chance to reflect and mourn for Daunte Wright’s unnecessary death at the hands of law enforcement,” he said.

Mr. Yang said he supported measures like requiring officers to live in the city and appointing a civilian police commissioner who is not steeped in the department’s culture. He said officers like Mr. Pantaleo should be fired quickly. But he rejected the idea that he was pro-police or anti-police.

“I think most New Yorkers know that we have to do two things at once — work with them to bring down the levels of shootings and violent crimes that are on the rise, and we also need to reform the culture,” Mr. Yang said.

Protesters were upset that Mr. Yang called for an increase in funding for a police task force in response to anti-Asian attacks. They also have doubts about Mr. Yang because Tusk Strategies, a firm that advises him, has worked with the Police Benevolent Association, the police union, which embraced President Donald J. Trump.

Mr. Adams attended the same vigil for Mr. Wright, and he was peppered with questions over his support of the stop-and-frisk policing strategy. Such stops soared under Mayor Michael R. Bloomberg, and they disproportionately targeted Black and Latino men. Mr. Adams said he believed stop-and-frisk could be a useful tool, but that it was abused under Mr. Bloomberg.

Mr. Adams has offered his own ideas: diversifying the Police Department, where Black officers are underrepresented; disclosing the department’s own internal list of officers with records of complaints and giving communities veto power over precinct commanders.

He also argues that he is the only candidate with the credibility to transform the force. Mr. Adams has said that he was beaten by the police as a young man and that inspired him to push for changes when he later joined the Police Department.

In an interview, Mr. Adams said that it took the city too long to fire Mr. Pantaleo and he would move more quickly on disciplinary matters if elected.

“I’m going to have a fair but speedy trial within a two-month period to determine if that officer should remain a police officer,” he said. “And if not, we’re going to expeditiously remove him from the agency. The goal here is to rebuild trust.”

Mr. Adams wants to appoint the city’s first female police commissioner, and he has spoken highly of a top official, Chief Juanita Holmes, whom the current police commissioner, Dermot F. Shea, lured out of retirement. Mr. Yang is also considering Ms. Holmes or Val Demings, a congresswoman from Florida and a former police chief, according to a person familiar with his thinking.

Mr. de Blasio has praised a new disciplinary matrix that standardizes the range of penalties for offenses like using chokeholds and lying on official paperwork. But while current leaders settled on these rules, the agreement signed by the police commissioner and the chairman of the Civilian Complaint Review Board is not legally binding, allowing the next administration to set its own policies.

Many of the mayoral candidates have called for changing how the city handles mental health emergencies. Since 2014, N.Y.P.D. officers have killed more than 15 people with histories of mental illness. The city is currently conducting a small experiment that sends social workers instead of police out on calls with emergency medical technicians in parts of Harlem.

As the Police Department says it is trying to build trust with the community, one recent decision appeared slightly tone deaf: bringing a robot dog to an arrest at a public housing building. The candidates criticized the use of the device, which costs at least $74,000.

Mr. Adams said the money would be better spent “stopping gun violence in communities of color.”

“You can’t build the trust we need between those communities and police with a robot,” he said.